modelling is a huge part of the eclipse eco-system, and the indigo release train brings xtext 2.0 , the new version of the award winning framework for developing domain specific languages. besides hundreds of bug fixes and significant performance improvements, xtext 2.0 introduces a refactoring framework and support for rich hover information. a new expression language can be embedded in any dsl and allows users to write computational logic right within their own language. the statically typed template language xtend eases the development and maintenance of code generators, which are now tightly integrated with eclipse.

" xtext 2.0 comes with huge performance improvements and lots of shiny new ide features such as refactorings and rich hovers for all domain-specific languages (dsl). the most important addition is the statically-typed base language which can be reused within any dsl, which unveils a whole new world of possibilities."

xbase is a partial programming language implemented in xtext and can be embedded and extended within other languages written in xtext. expressions are at the heart of every programming language, but can be difficult to get right. xbase helps you to allow more complex programming within your dsl, using an expression language that is closely related to java.

you can read more about how xbase works at sven efftinge's blog, or just take it for a spin in the new indigo release.

xtend is a statically-typed programming language which tightly integrates with, and runs on, the java vm.  it improves on the following concepts:

all xtext based languages now get support for rename refactorings for free, simply by adding the refactorelementnamefragment. see jan köhnlein's blog post about this for more details.

rich hovers are now shown on any reference or declaration. 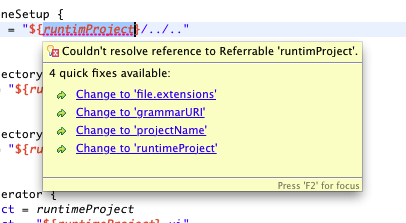 there are some huge improvements in xtext 2.0. check out the difference in build time:

not to mention the memory usage improvements: