Dave Thomas' keynote focused on the history and future of embedded devices though much of what he explained was around the fact that what we do at Eclipse generally sucks. 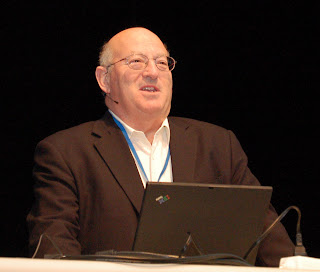 In particular, Java sucks, frameworks suck, modeling sucks big time, and hence Eclipse as a whole is a complex disaster. Those sound like fighting words! He expressed dismay that EMF made modeling marginally successful otherwise modeling would have just died off long ago. I almost felt kind of guilty, until he got to the part about Domain Specific Languages being a solution to all this complexity. Hey, isn't that what modeling will help develop? I noticed that his misconceptions will be fully addressed by my talk tomorrow.

After that I attended Tonny Madsen's talk about implementing screen flows in RCP applications; he's from The RCP Company. 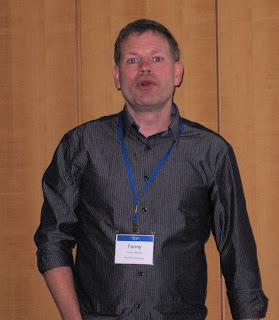 He explained some of the problems related to flow control in wizards and described the simpler screen flow approach he's advocating. He showed some of his cool tools for designing flows.

Benoit Langlois of Thales talked about SolFa, i.e., a solution factory for integrating components in the software generation processes. 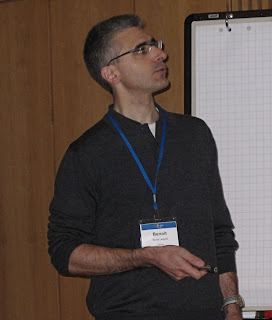 A factory component is a unit of generation with a clear objective and a well defined contract based on view points. They are orchestrated into an overall assembled plan. It needs to bridge the gap between the flexible control desired by the users and the technical precision needed by the provider of the services. His case study example showed how SolFa can be used to orchestrate the EMF's generation process. It's interesting how SolFa makes EMF's rigid generation process more flexible by making it easily configurable as part of an overall generation plan. Much of what we have hard-coded in Java in our generator adapters can instead be orchestrated by what's effectively a SolFA DSL for that. Very cool stuff!


Next Quentin Glineur described how ATL can be used to transform EMF models in a declarative way. 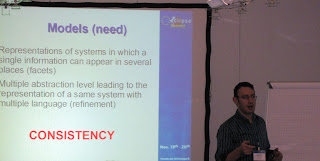 It can directly operate on an instance to modify it, i.e., to implement transformations such as refactoring. Constraints can be applied to ensure that a transformation produces results that conform to expectations. Its declarative mapping design supports bidirectional transformation;
preconditions and post-conditions govern the applicability of the patterns. In the future, they'd like to align with portions of QVT core. 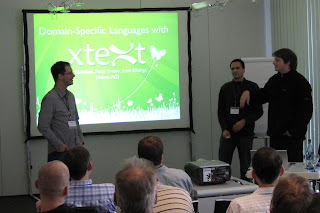 I love this stuff and of course it's ironic that sucky modeling technology is exactly what you need to produce DSLs, the very thing Dave Thomas asserts to be one of the important technologies for the future of the embedded space. With an augmented EBNF grammar you can define your syntax and specify the abstract modeling onto which it maps. I think this technology will have a big impact!

I had lunch with Xavier from Soyatec and Benoit of Thales to talk about starting the SolFa project at Eclipse. Woo hoo, another cool project. 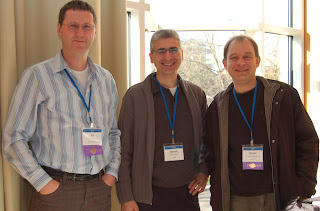 I also chatted with Steve Sfartz of Microsoft to discuss how we might start a dialog with folks working at Microsoft who clearly share common interests. He already sent me a note. Woo hoo! 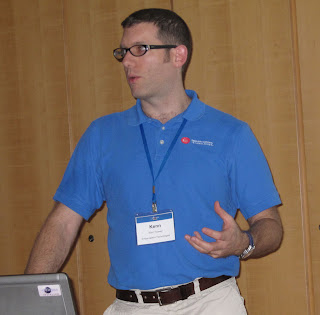 The data model design process covers the whole abstract range of issues from contextual, conceptual, and logical to physical, definition, and instance. He talked about Information Management Model (or something like that) to help unify things like UML, Entity Relationship Diagrams, Relational models, XML Schema, and LDAP.


After that, my other good buddy, and recent new father, Cedric Brun of Obeo, presented the EMFT Compare framework. 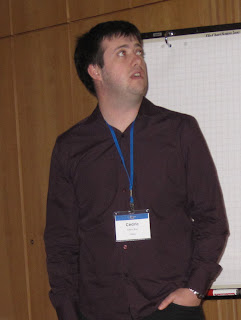 It's fully integration with on Eclipse's team APIs, and of course is based on comparing models structurally rather than based on comparing their serialized representations. The compare editor displays the side-by-side structural views of the model, i.e., the same as the view used in the EMF editor's outline for that model. They even have an EMF Diff model that captures the differences between the two models in the form of a serialized model. They're currently prototyping support for comparing semantic instances but displaying a graphical representation of them. It's really cool!

After that yet another good buddy---no, I wasn't on the program committee picking all my buddies---Eike Stepper presented on CDO. 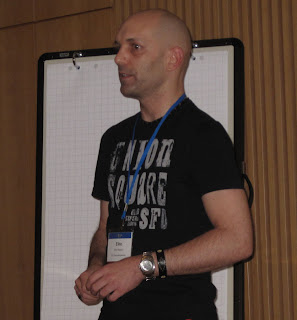 He drew attention to the fact that the CDO team has committed 175 bugzillas since Ganymede as an example of how active the development is. I speculated out loud that maybe it was really buggy before; it makes you wonder how I treat people who aren't my buddies doesn't it? He showed some of the cool new things in the latest version, like structured resources organized into folders, save points to support partial rollback, passive updates to disable updates to the session based on external changes, change subscriptions for producing regular EMF notifications for changes in the remote instance, and even a query framework. He's really has been busy! He finished very quickly, but there were a heck of a lot of questions! I prompted him with a question about the fact that CDO allows objects to be garbage collected since objects do not directly contain references to one another. Eike explained that this allows CDO to scale to resources that are bigger than 4G in size, for example. That was the best question and answer session ever!

After that I talked to Hajo about writing up a project proposal for the cool stuff he demoed yesterday. Woo hoo, this is going well! On my way down to the the MTL presentation I bumped into Dave Thomas and asked him what's the difference between a model and a DSL? He said they are the same thing. Excellent, that's the right answer! He said he'll be around tomorrow, so it will be cool to see what he thinks after my talk.

The good buddies never end, because Sandro Boehm was next to present JCRM. 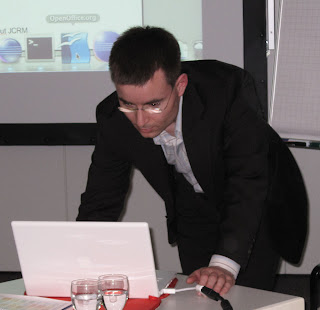 This was followed by the board meeting. Those on-site at ESE congregated in a little room. 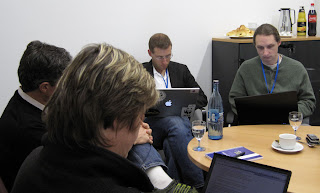 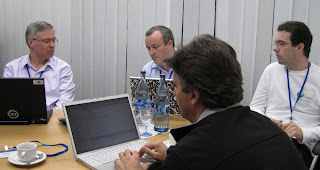 I'd tell you all about what we talked about, but then I'd have to kill you. Or they'd kill me. You'll just have to wait for the public minutes.

Finally it was time for the reception. Lynn encouraged folks like Larry to worship her as a goddess. 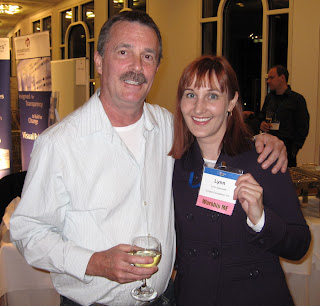 Janet, Chris, and Doug enjoyed their beers, although I don't think Doug approves of idol worship. 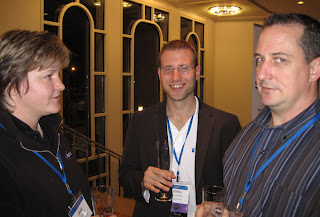 Later I there was even a pretty young woman who couldn't keep here hands off me. Despite the smile, I felt violated. I hope her husband reads this blog. 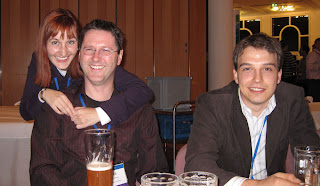 I spent quite a bit of time chatting with Maximillian Koegel and Jonas Helming about their research work relating to change management and project management.

That was a really fun night. As is so often the case, chatting with people is more than 1/2 the fun.

Day Two follows on the next page.
(From http://ed-merks.blogspot.com )

The day started with David Wood talking about the Symbian decision to become open source. 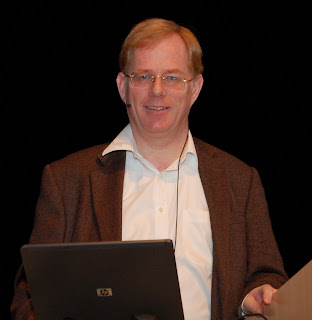 Fragmentation caused by too many mobile operating systems dilutes the industry's effort while open source helps to create a more successful, cohesive, productive community. Stability and quality of the base, agility in responding to changing needs, and a growing base of skilled developers are key aspects to a platform's success. Open source lowers barriers to entry, but it's not a panacea because integration and cohesion are always a challenge, and fragmentation is always a risk and in fact open source makes that risk more likely. A copyleft license like Eclipse Public License helps avoid that, though it's not always possible to consume the changes external parties make to the base. A very large number of companies have signed up to participate in this system. Good luck Symbian!

After that is was time for my stupid modeling talk. By the way, did you notice that in Ian's blog, all the people talked about modeling, even Doug Gaff? Resistance is futile. As I tried to bring up my screen on the projector, my computer decided to go to lala land so I had to power down and reboot. There's nothing quite like an untimely technical failure (like there's ever a timely one!) to get a guy off to a great start. Oh well, I think it went very well, judging by the comments I got afterward.

After the meeting I had a chat with Axel Rittershaus of Skyway Software. 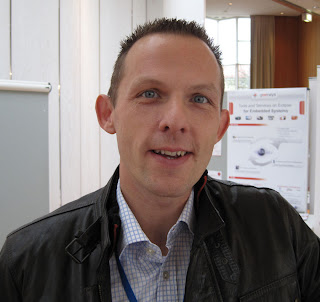 He really liked my talk and we speculated about the various reasons why there are so very many misconceptions around modeling. Skyway uses EMF to help build their tools and models and those in turn are helping their end-users generate web applications. There's meta in action for you!

After that I chatted with Cameron Bateman of Oracle. 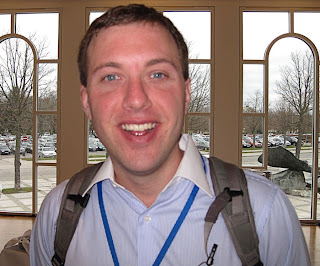 I've chatted with him a few times on IRC's #eclipse-modeling, so it was especially nice to get to meet him in person. We chatted about how best to sync up a model and a DOM and about rendering something that's better than the ugly properties view we have right now. It's great working with enthusiastic people with a can-do attitude.

I was chatting with so many people, I missed the Ecore Tools talk and the Tom Schindl's talk. That made me really sad, especially when everyone told me they were both really good. Darned ESE is too short so there's not enough time to do everything. I also spent time with Stefan Eberle chatting about the AUTOSAR implementation he's working on. I should have taken more pictures; yet more brain failure. Then I missed Rich's Amalgamation talk. Double darn. I'm going to have to cut some of those conversations short next year, because before I knew it, the summit was over after short wrap-up at 5:00.

For dinner I went out with some of the board members and some of the folks considering the possibility of starting an automotive working group. We meet with them tomorrow early, and I still don't have my slides ready. I'd best get to it!