each year we ask eclipsecon registrants some questions to better understand who is coming to eclipsecon.  the questions are optional but we tend to get a good percentage of attendees responding.  i am a bit late writing up the responses, but better late than never.  for those interested, the 2008 , 2007 and 2006 responses are also available.

the eclipsecon crowd is a hardcore set of eclipse users, 68% had more than 3 years experience using eclipse.  this was up from 60% last year, who claimed to have more than 2 years experience.   (note: we changed that scale to reflect the longevity of eclipse.)  there was also a big drop (23% to 9%)  in the number of people who are new to eclipse or have less than 1 year of experience . 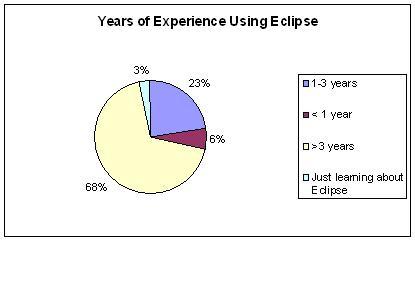 eclipsecon continues the traditional of attracting technical people, 66% identified themselves as a developer or architect; very similar to last year. 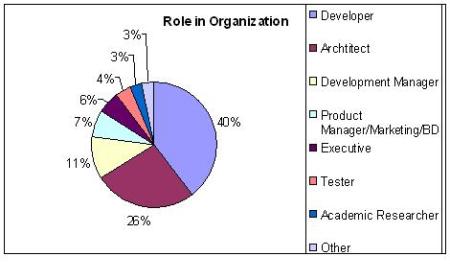 isv’s continue to be the predominate type of organization sending people to eclipsecon.  however, this seems to be declining and more people that are using eclipse for internal use, either as a tools platform or using eclispe rcp/equinox as a platform for their applications, are sending people to eclipsecon.   imho, this is a very nice trend to see at eclipsecon, since it broadens the entire eclipse community. 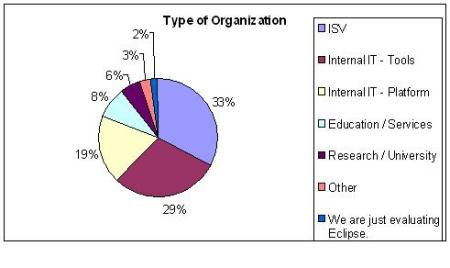 this year we asked the respondents to select which projects they were using. we used a slimmed down list since we just have too many projects to make someone read the entire list.  the numbers for this question seem to be down across the board, which indicates to me that many people just didn’t bother answering.  next year i think we will have to significantly reword this question. 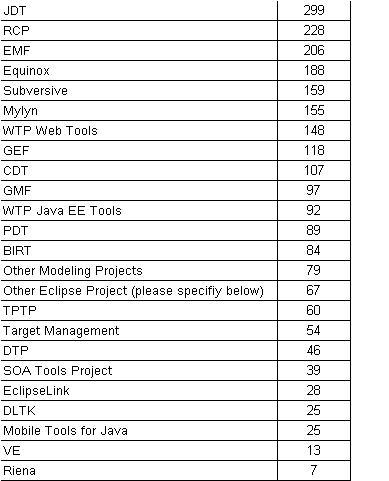