This post examines some of the details of how environments are handled in the ECMAScript 5 (ES5) specification [1]. In particular, there isn’t a single “current environment” in ES5, but two: the LexicalEnvironment and the VariableEnvironment. A piece of code at the end exploits these ES5 internals to produce different results on Firefox and Chrome.

Note: You will have a much easier time understanding this post if you already know how environments work in ECMAScript 5.

Let us start with a quick summary of environments and execution contexts in ECMAScript 5:

Another concept that is important to understand is hoisting: In JavaScript, any variable declaration var x=v; is split into two parts: That means that even declarations made inside blocks such as for loops are made at function scope. This dominance of the function scope is the main motivation for keeping two current environments, as we shall see below. 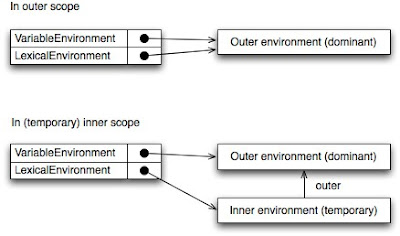 LexicalEnvironment and VariableEnvironment are always the same, except in one case: When there is a dominant outer scope and one temporarily wants to enter an inner scope. In the inner scope, a few new bindings should be accessible, but all new bindings made inside of it should be added to the outer scope. This is done as follows: These differences matter for with statements and catch clauses, which create temporary scopes. In both cases, the dominant scope is the surrounding function.

Functions and their scope: declarations versus expressions

Another area where the difference between LexicalEnvironment and VariableEnvironment can be observed are function definitions: function declarations use the VariableEnvironment as scope, while function expressions use the LexicalEnvironment. For function declarations, the motivation is to move the declaration to the (dominant) function scope. They should thus only see what exists at that level. The following code example illustrates how that works. Console output is “bar” on Firefox and Rhino, “abc” on V8 (Chrome, node.js). The latter more closely mirrors the specification, the former is probably what most programmers would expect.

If you instead use a function expression, the output is “bar” on all platforms.

[Thanks to Allen Wirfs-Brock for helping me understand some of the finer points of LexicalEnvironment and VariableEnvironment.]