This post describes a proposal for making classes and inheritance simpler in ECMAScript.next: “Prototypes as classes”.

JavaScript prototypal inheritance is hard to understand, especially for people coming from other languages that are used to classes. This post explains that it does not have to be that way: There are plans to simplify things in ECMAScript.next. What’s intriguing about this simplification is that it isn’t a radical departure from current practices, but rather a clarification of them.

This post explains how the new language features work by introducing a hypothetical programming language called “NextScript” that has the new-style classes, but without JavaScript’s legacy baggage. Then we examine how JavaScript currently handles classes and conclude with transferring NextScript’s classes to JavaScript, while remaining compatible with legacy code.

NextScript is JavaScript without constructor functions. The prototype relationship between objects works like in JavaScript, but there is an operator for setting the prototype. When you think of a class as being a construct that produces instances then the closest thing to a class that JavaScript has are constructor functions. In contrast, NextScript uses plain old (non-function) objects: That is, those objects are very similar to classes in many programming languages (such as Python, Java, or C#), but there is no need for a new construct, an object becomes a class by being the operand of the new operator. Example: Interaction: The instance jane has the prototype Worker which has the prototype Person. That is, prototypes are used for both the instance-of relationship and the subclass-of relationship. The following diagram shows this prototype chain: 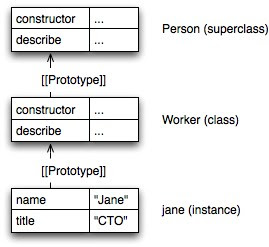 Things become even simpler if we add one more feature: super-calls. They make it easier for an overriding method to call the method it overrides (its super-method). There are two ways of looking up methods: Note that this does not change during a super-call, only the search for the method starts later in the prototype chain. The tricky thing with super-method lookup is to find the super-object. This can be done manually, by directly naming it, as in method Worker.describe() at (*). Or it can be performed automatically, via a language construct of NextScript: The statement at (**) is a super-method lookup and syntactic sugar for Now Worker can be simplified as follows.

Let’s look at how classes work in JavaScript. Example: We replace the default prototype and thus have to set Worker.prototype.constructor [3]. Note that super-calls are orthogonal to new-style inheritance and would be just as useful in the above code. The same holds for the prototype operator <|.

The new approach leads to several simplifications: All in all, the prototype feels like the natural construct to represent a class.

Note that the internal structure is still the same as before. The only difference is that the variable that names the class refers to the prototype and not the constructor. 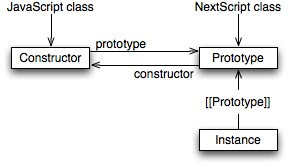 The proposal “Object Literal Extensions” has been accepted for ECMAScript.next. It complements the idea of prototypes as classes. Highlights: