eclipse is a good ide. at a first glance, it does the job. good enough. at least for myself, i was not that much excited when i used it the first time. i came from the microsoft visual studio world, and have used many other proprietary ide’s. so eclipse was just ‘yet another one’. but what eclipse makes really great is the incredible wealth of functionality which is not visible right away. yes, this is the same for any other software tool: it takes time to explore, and once you know things well, you do not want to switch or even consider something different. same for me.

the other thing is: after some time, i get used to things, and i do not appreciate it that much any more. only until someone reminds me that maybe things are not that well-known? this is what happened to me two days ago: i did some editing in eclipse, while a colleague was watching me doing this. then he said something like this

i do not remember his exact words, as i was surprised as well. i did not do anything special? kinda standard eclipse thing. well, maybe not.

warning: using this eclipse feature here might be highly addictive

and now the magic: i pressed ctrl+space to open the content assist:

pressing ctrl+space reduces the list of items to template proposals only.

i selected the ‘ for – for loop ‘ item and hit enter. this adds the code for the loop:

notice the blue boxes. my cursor stays on ‘var’, and i can simply type my variable i want to use, and it changes all loop variable instances automatically (!!!):

next i press tab which moves me to the ‘max’ variable:

i type in my loop max variable and press tab again: this moves me to the body of the loop:

now i enter my loop body:

is all what i needed

it is possible to apply a template on a selection. for example i can select one or more source lines:

then i press ctrl+space and select the for-loop template. this wraps a for() loop around it:

for loop around selection

let’s have a look at the stage when i pressed ctrl+space and selected that template:

the eclipse editor templates are configured using the menu window > preferences > c/c++ > editor > templates. the template example i was using above looks like this: 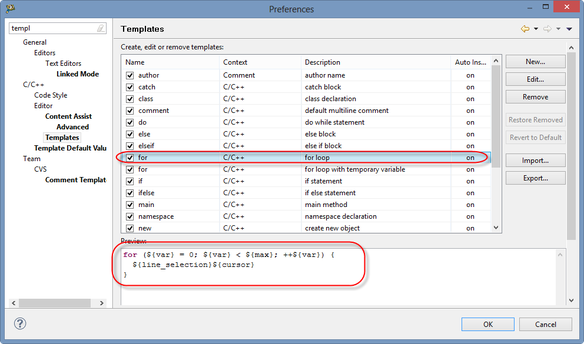 if i do not like a template, i can create a new one or edit an existing one: 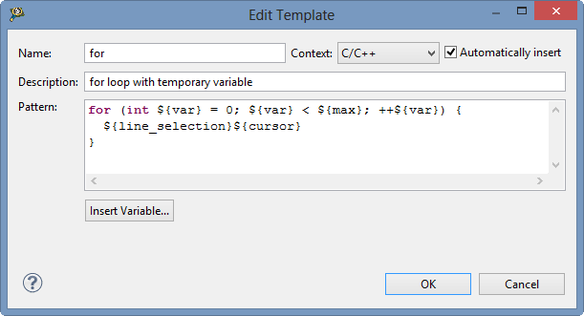 variables are of the form: 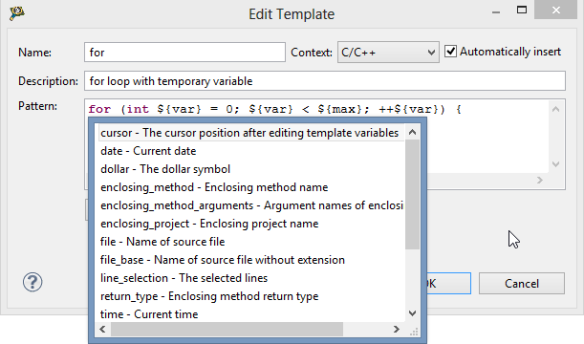 use ctrl+space while editing the template to get a list of built-in variables.

anything not a built-in variable is a custom variable (e.g. ${var}). using the variable name multiple times references the same variable content.

it is possible to use an ‘empty’ variable as well with ${} . that way i can have things which are not replaced with anything if i want to have it that way.

adding new templates is really easy. for example i have a template ‘taskcreate’ to create the source code to create a freertos task:

or another template to implement the framework for a task function:

and within seconds i have created the framework for a new task:

another way to use templates is for comments. for example i can define a comment like this: 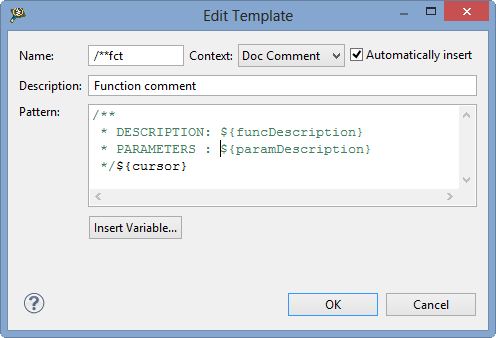 and press ctrl+tab, and it will replace it with my template

eclox for doxygen comes with other built-in comment templates.

to share templates, i use the import and export buttons: 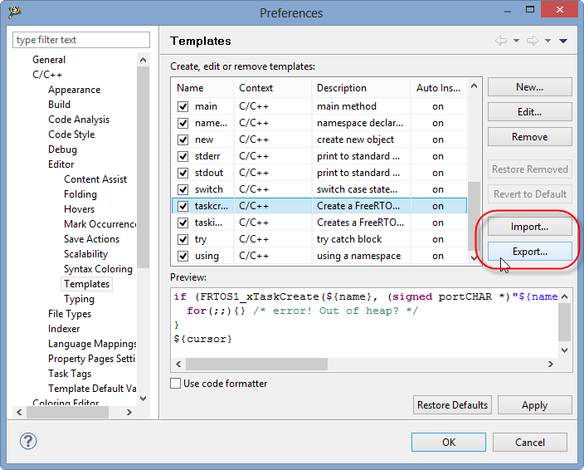 import and export of editor templates

editor templates are a powerful way to extend the eclipse editor and to improve productivity. this is one of the greatest eclipse features in my view.