Elasticsearch is a full-text search engine where JSON documents are stored, indexed, and are searchable.

Our Elasticsearch cluster consists of 14 nodes. The current scale we operate at is around 54,000 documents per second, a total of 4.6 billion records or 5TB of data per day.

b. If the number of messages sent is much higher than the indexing rate, Elasticsearch rejects those messages and responds with TOO_MANY_REQUESTS (429) response codes.

We need to handle the following cases:

Use a Distributed Queue

Introducing a distributed queue will help to deal with the huge number of incoming records. The application can dequeue a limited number of records that it is able to process. This avoids the application receiving an overwhelming amount of data.

Use Multiple Instances of an Application

Using a distributed queue like Apache Kafka, we can scale up by spawning additional instances of the application to handle the increase in data load. As long as they have the same consumer group id, every newly spawned instance will start dequeuing messages from Apache Kafka.

If the application is down, messages can be queued up until the system is ready to process them and push them into Elasticsearch for storing and indexing.

While dealing with huge volumes of data, a bulk request is preferred. Start by pushing a batch of roughly 5MB and keep increasing the size until there is no more performance gain.  If Elasticsearch sends a TOO_MANY_REQUESTS (429) response code or EsRejectedExecutionException with the Java client, that's an indication that the indexing rate is higher than what the cluster can handle. When this situation arises, pause indexing for a bit and try with exponential backoff.

Use Multiple Workers/Threads to Send Data to Elasticsearch

In every application, use multiple threads to push bulk messages concurrently. 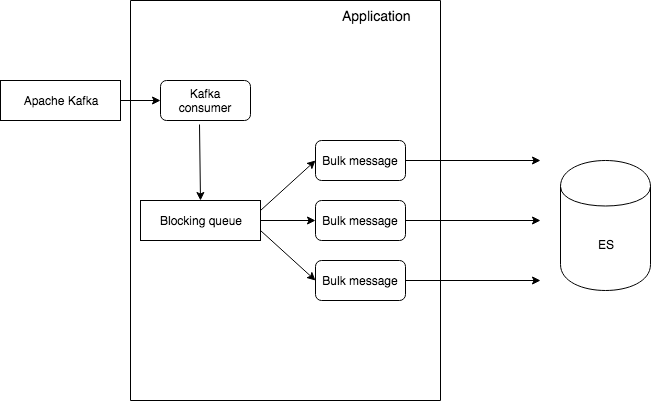 For example, if you want to push 20 parallel bulk requests containing 5,000 messages each, 20 * 5,000 = 100,000 messages in total. The worker threads will automatically pick up messages from their respective queues and start pushing them to Elasticsearch.