Today, performance is one of the most important metrics we need to evaluate when developing a web service/Application. Keeping customers engaged is critical to any product and for this reason, it is extremely important to improve the performances and reduce page load times.

When running a web server that interacts with a database, its operations may become a bottleneck. MongoDB is no exception here, and as our MongoDB database scales up, things can really slow down. This issue can even get worse if the database server is detached from the web server. In such systems, the communication with the database can cause a big overhead.

Luckily, we can use a method called caching to speed things up. In this paper, we’ll introduce this method and see how we can use it to enhance the performance of our application using Spring Cache, Spring Data, and Redis.

Caching is a strategy aimed at tackling the main storage problem, which means: the bigger the storage is, the slower will be, and vice versa. In a computer, we have a hard drive which is big but also relatively slow. You then have the RAM which is faster but smaller in its storage capabilities, and lastly, the CPU registers which are very fast but tiny. The following chart showcases the memory problem: 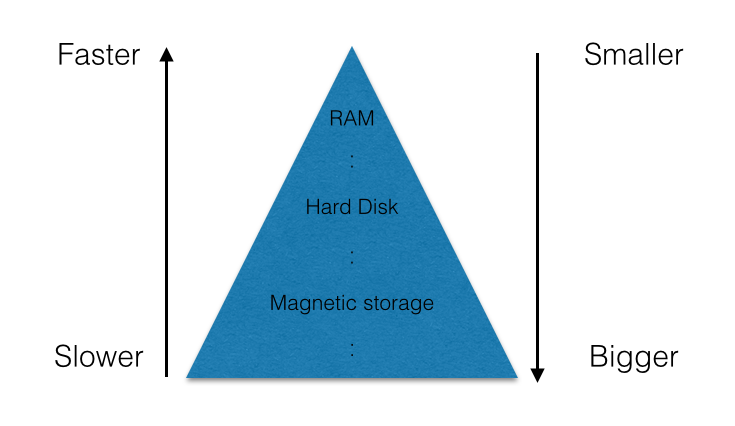 A cache is a component that stores recently accessed data in a faster storage system. Each time a request for that data is made, it can (with some probability) be pulled from the faster memory. The underlying assumption behind caching is that data which have been recently read, have a higher chance of being read again. Thus, they should be stored in a faster memory so that even the next read will be quicker.

To gain a better understanding of this concept, think about a group of people sitting in a library. The library itself represents a huge storage system, but it’s hard to find some books there. In our imagination, the library is a big and slow storage mechanism. Suppose that these people, whenever they find a book, read it but don’t return it since they rather prefer to keep it on their desks. They have this behavior because they are sure they’ll need it again soon, and it makes sense to keep that book on the table where it is more accessible. In this example, the library is the main storage system, while the table is our cache.

In this paper, we’ll build a web service that we’ll call “fast Library”. Here we’ll implement the concept of caching for a virtual library. MongoDB will be the main storage system, and we’ll build the cache using Redis. Our web server will work in Tomcat code written using Spring Boot, Data and Spring Caching Architecture

As the first step, we’ll build a basic web server that stores data in MongoDB. For this demonstration, we’ll name it “fast Library”. The server will have two basic operations:

POST /book: This endpoint will receive the title, the author, and the content of the book, and create a book entry in the database.

GET /book/ {title}: This endpoint will get a title and return its content. We assume that titles uniquely identify books (thus, there won’t be two books with the same title). A better alternative would be, of course, to use an ID. However, to keep things simple, we’ll simply use the title.

This is a simple library system, but we’ll add more advanced abilities later. 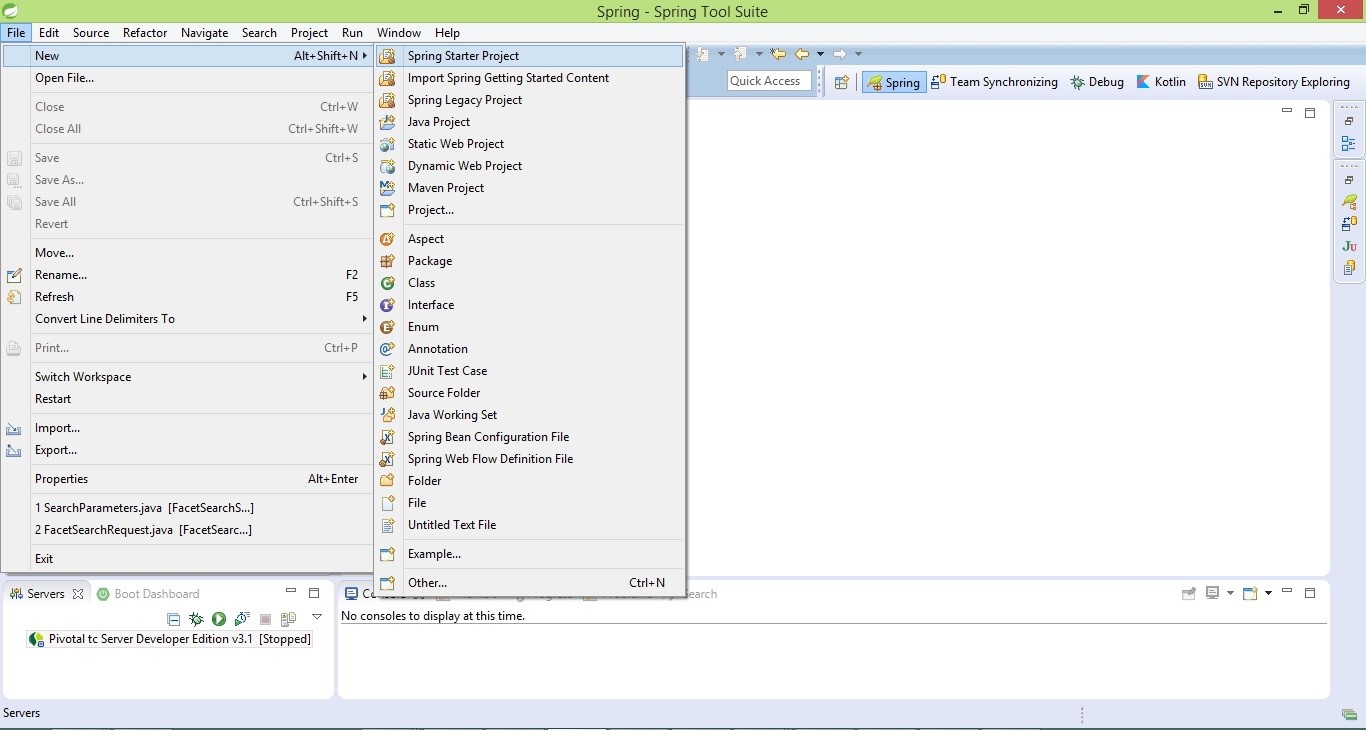 We are building our project using Java and to build we are using maven, select values and click on next 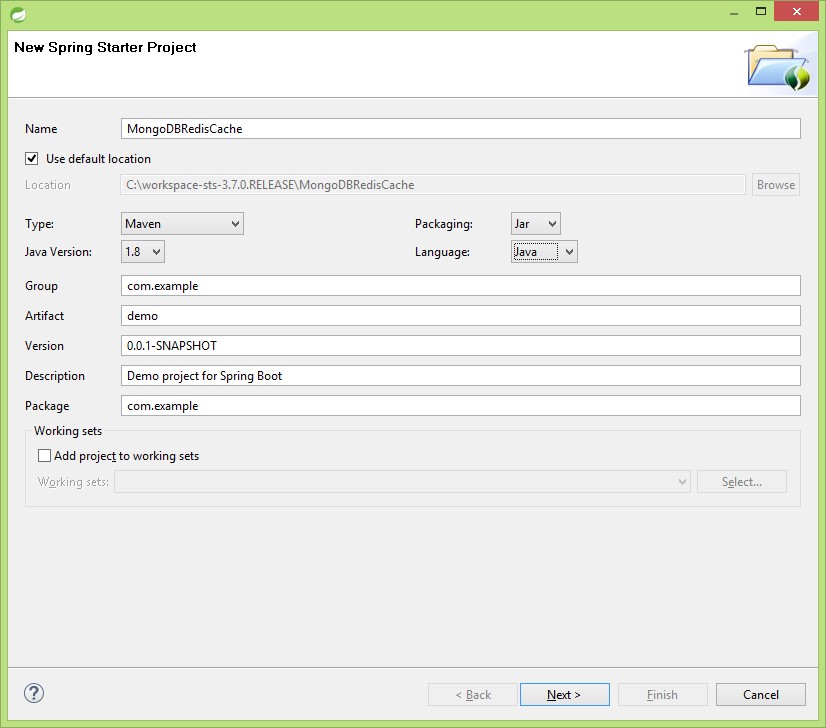 Select MongoDB, Redis from NOSQL and Web from the web module and click on finish. We are using Lombok for auto generation of Setters and getters of model values so we need to add the Lombok dependency to the POM 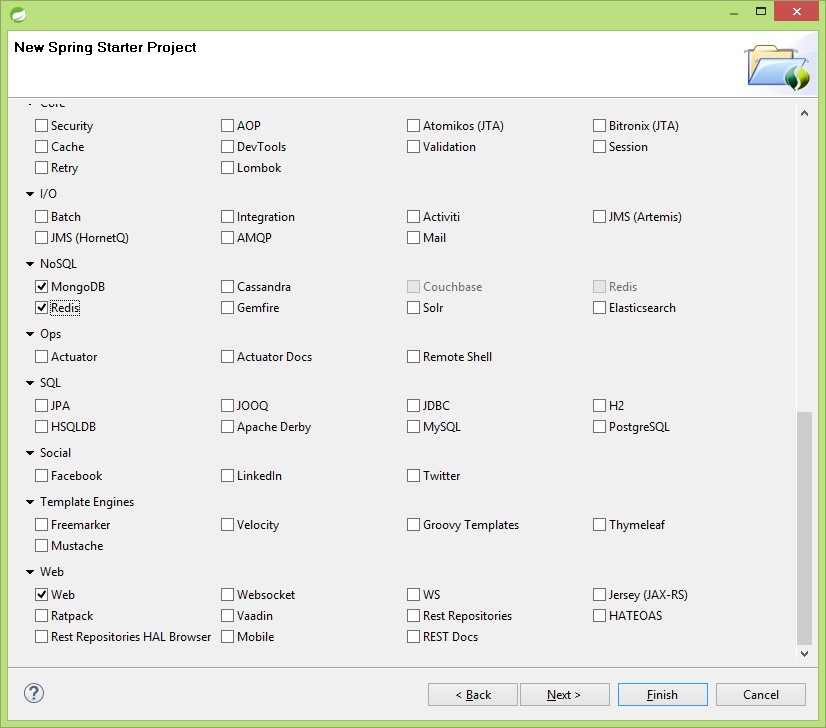 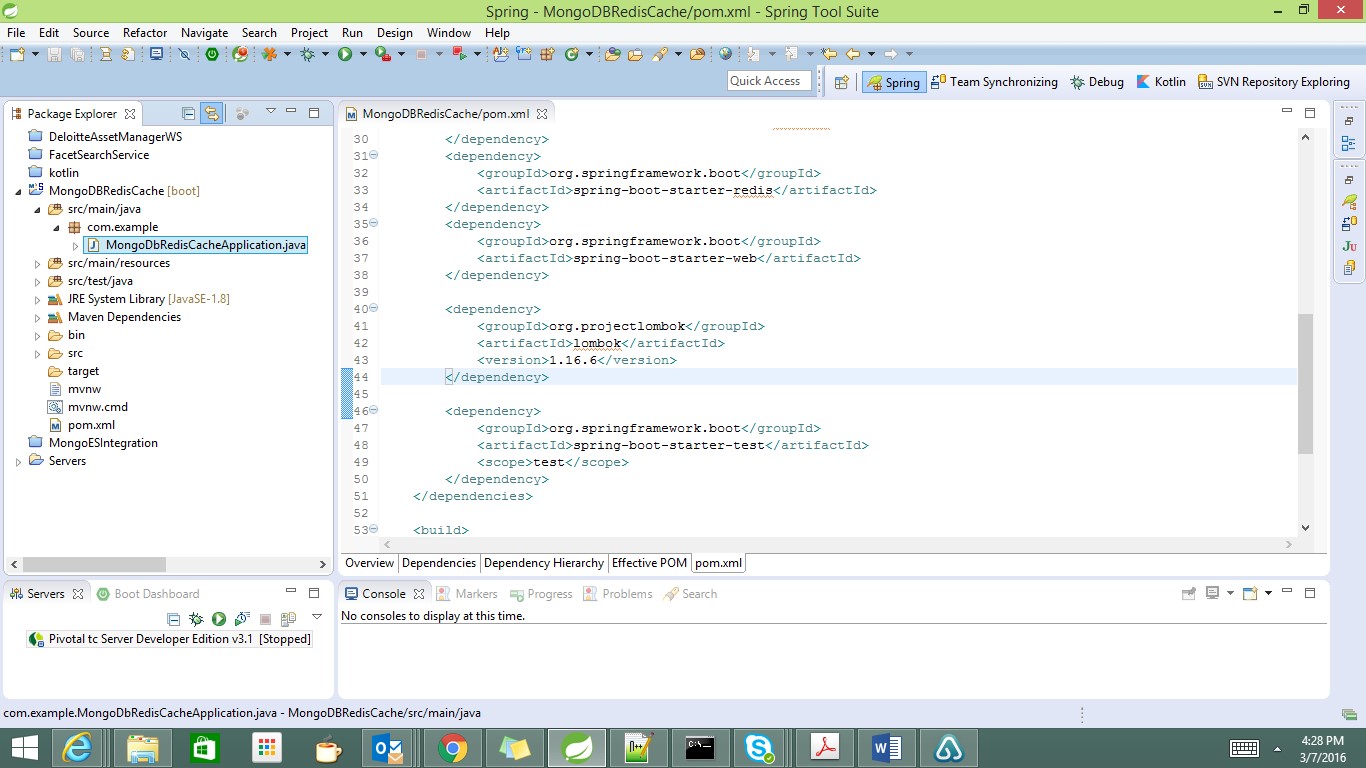 Spring Data creates all basic CRUD Operations for us automatically so let’s create BookRepository.Java which finds book by title and deletes book

So far we’ve created a basic library web service, but it’s not astonishingly fast at all. In this section, we’ll try to optimize the findBookByTitle () method by caching the results.

To get a better idea of how we’ll achieve this goal, let’s go back to the example of the people sitting in a traditional library. Let’s say they want to find the book with a certain title. First of all, they’ll look around the table to see if they already brought it there. If they have, that’s great! They just had a cache hit that is finding an item in the cache. If they haven’t found it, they had a cache miss, meaning they didn’t find the item in the cache. In the case of a missing item, they’ll have to look for the book in the library. When they find it, they’ll keep it on their table or insert it into the cache.

No changes are going to take place in the saveBook () function as it has no effect over the cache. We need to change the findBookByTitle (), which will have the following flow:

If we need to install Redis, we can learn how to do here. Once done, run Redis locally on your machine using command

In above code cache, manager bean is used to configure Redis Cache in our application usage, along with spring boot’s intelligent configuration.

If we want to use already stored cache we need to turn flag under cacheManger to true for the value setLoadRemoteCachesOnStartup. Let’s now write the method

To delete from the cache when a record is deleted just annotate with below line in BookRepository and let Spring Boot handle cache deletion for us.

We’ve created a basic system that works with Redis to cache all the query results from the database. However, we must admit that it’s not a smart system. It just saves each result to the Redis cache and keeps it there. In this way, the cache will slowly overload the computer’s RAM until it fills up.

Due to this memory limitation, we must delete some of the items in the cache and only keep a few of them. Ideally, we would want to keep those with the highest chances of getting read again only. To select the items we want to delete, we have to establish a sort of caching policy. Deleting random items would probably be a valid policy, but it obviously won’t be very effective. We’ll use one of the most popular policies: the LRU (Least Recently Used). This policy deletes the cache items that were (as the name implies) the least recently used.

Luckily for us, Redis has an LRU mechanism implemented within it, so we don’t have to bother with it on the application layer. To that end, all we have to do is to configure Redis to delete items on an LRU manner. To achieve that, we’ll add two arguments to the command starting Redis. The first will limit the amount of memory it can use (in this example we chose 512 MB) while the second will tell it to use the LRU policy. The command will look like that:

One of the issues that caching introduces is that of keeping the cache up-to-date when data changes. For example, let’s create the endpoint PUT /book/{title}/{author} that enables us to update the text of a certain book. For that, we shall implement the method updateBookByTitle (title).

The natural thing to do would be to simply update the record in the main database containing that book. But what if the item is in the cache? In that case, the next time we read it, we’ll get a cache hit and read the item from the cache. But that item would be the not updated version of the book, which means that a user might not get its latest version. Not all the systems can tolerate this inaccuracy. Thus, we’ll update the cache with the new, updated data.

In that case, the implementation of the update method will be the following:

Just by adding @CachePut annotation to the database update method, spring boot will handle refreshing cache for us.

Now that we have a nice working cached app, it’s time to enjoy the fruit of our work and test the performances of our application. For this test, we have first inserted 1,000 books into the library and then read them randomly. Now we’ll measure how fast the server response times are in the cached application versus the non-cached one. At the end of the test, these are the results in a graph: 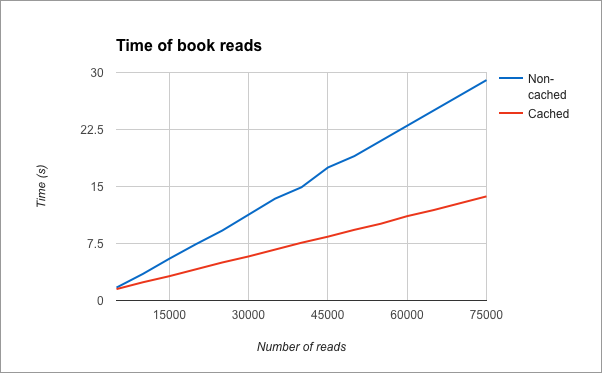 In this paper, we have seen how to speed up a web server connected to a database by caching the data it accesses to. Although here we have used Redis as the cache, we can use other key-value stores for the purpose. An example of another popular database is Memcached. I chose Redis mainly because of its popularity, its detailed documentation, and ease of use.

While caching is a great performance booster, it isn’t a good fit for every application. Here are some considerations you can think about when thinking about caching:

Lastly, it is worth keeping this idiom in mind:

Premature optimization is the source of all evil

This should remind us that optimizations have their proper time and place.

You can find full Project code at GitHub