I already had the Anniversary Update on my Windows 10 installed, and I needed to SSH into one of my Raspberry Pis. I normally do this from my Mac, but since I was in Windows 10 working on something, I thought, "this would be a great opportunity to install the new Ubuntu Bash support, and then I can SSH from there, right?" (I could just install Putty, but then I wouldn’t have a reason to check out the Ubuntu Bash support, right?)

On the first attempt, I followed instructions here. The Bash windows opened and closed too quickly to read whether there was an error or not.

On the second attempt, from a Command Prompt, entering Bash, I got this:

I enabled Developer Mode, went into Settings, and clicked the radio button under "Use Developer Features": 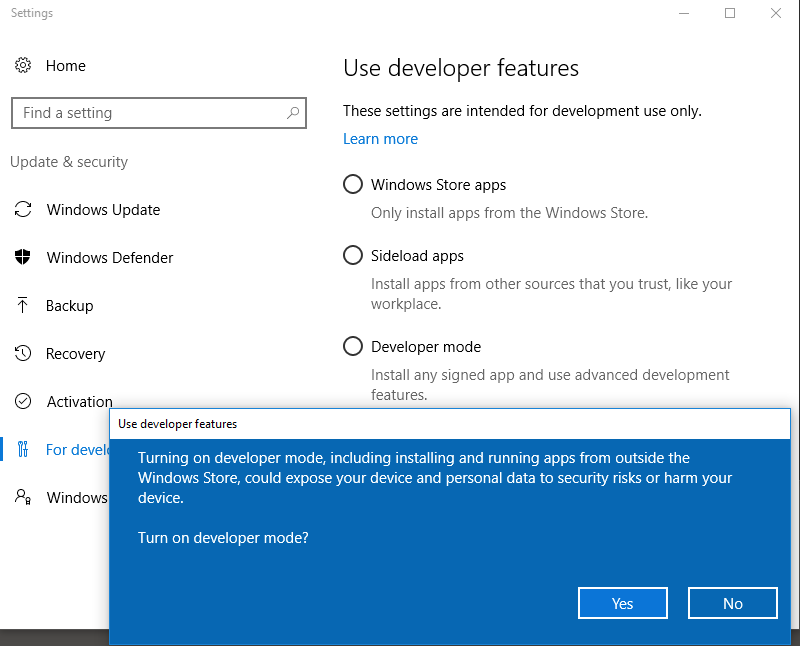 Then I got this error:

Hmm. Not very helpful. Clicking on "Learn More" opened a browser to a help page, but it didn’t load. I’d reconfigured my IP address to a static address on a local network for testing and I didn’t have internet access. 0x80004005 probably could be a little more helpful, but I enabled DHCP to get an internet connection and then tried selecting the Developer Mode option again. It downloaded and said, "some features may not be available until your PC is rebooted." I rebooted and ran Bash from Command Prompt. Next, it prompted to download the Ubuntu Bash support. Why it couldn’t have done this already is beyond me - I’d already rebooted once - but answering "y," it started downloading:

After it completes, you create a Unix username and then you’re all set. It even has SSH included.

Bash aka The Solution for Everything — The ''Special Files''