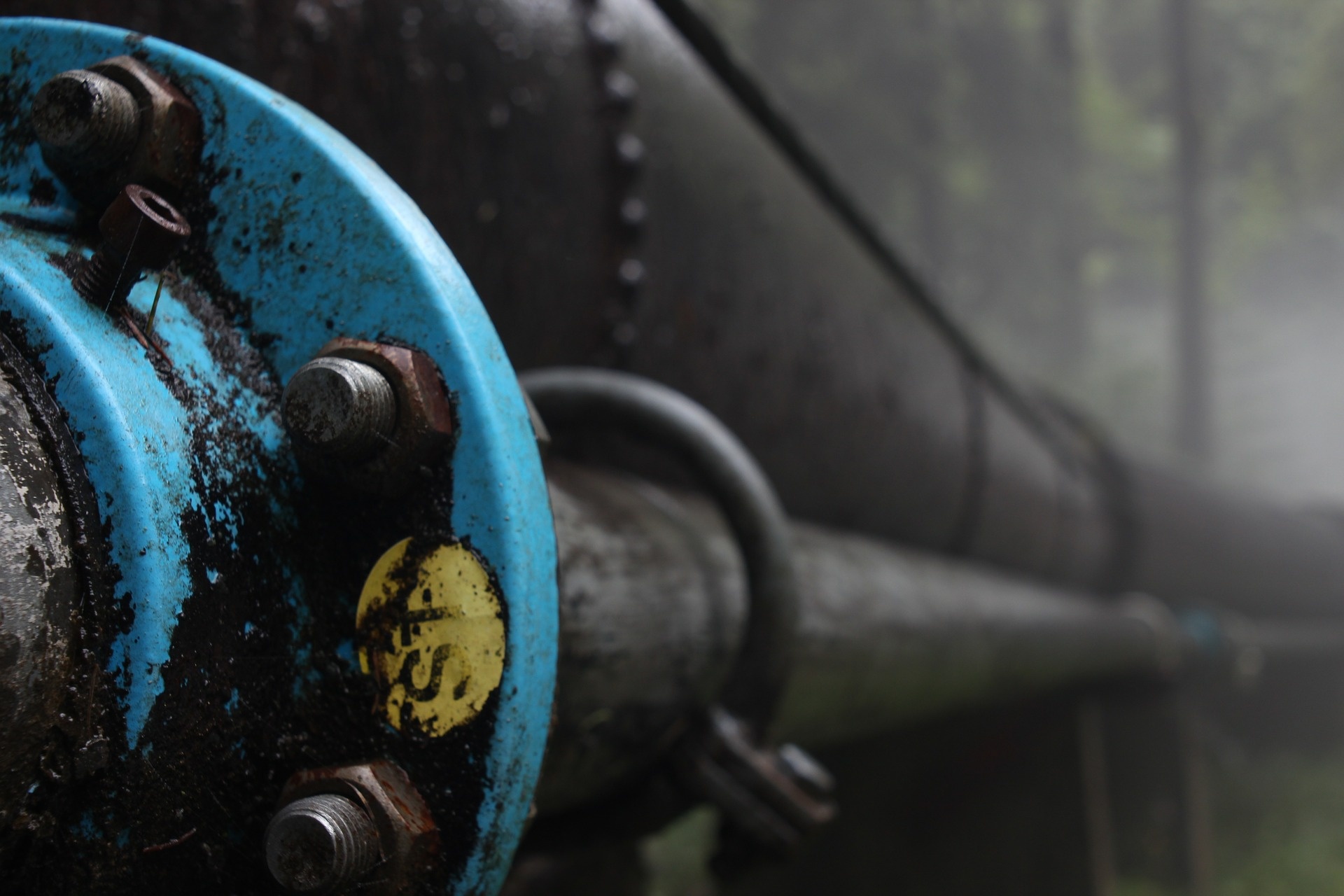 If you are using Azure DevOps for building and deploying your .NET core applications, then you should consider the following.

To demonstrate the concepts that we discussed, we will build an integrated CI/CD Azure Pipeline which will build and deploy an Azure Function to Azure. Let’s first briefly discuss the utilities that I mentioned above.

For most of us, the MSBuild process is a black box that chews source code and spits out application binaries. To address concerns with the opaqueness of build logs, MSBuild started supporting structured logging since version 15.3. Structured Logs are a complimentary feature to the file and the console loggers, which MSBuild has been supporting for a while now. You can enable binary logging on MSBuild by setting the /bl switch and optionally specifying the name of the log file, which is  build.binlog in the following command.

The binary log file generated by executing the previous command is not human readable. The MSBuild Structured Log Viewer utility helps you visualize the logs and makes navigation through the logs a breeze.

Coverlet is a cross-platform tool written in .NET Core that measures coverage of unit tests in .NET and .NET core projects. The easiest way to use Coverlet is to include the Coverlet NuGet package in your test projects and use MSBuild to execute the tests. You can use the following commands to perform the two operations.

Report Generator is a visualization tool that takes a code coverage file in a standard format such as Cobertura and Clover and converts it to other useful formats such as HTML. Due to its integration with Azure Pipelines, you will be able to see the code coverage results alongside build results in the same pane.

I created a simple Azure function named GetLoLz that returns a string with as many occurrences of the text “LoL” as requested by setting the query parameter named count of the HTTP request as follows.

You can download the source code of the sample application from my GitHub repository. I used .NET Core 3.0, Visual Studio 2019, and Azure Function v2 to build the application.

Launch the application now and visit the following URL from your browser or send a GET request from an API client such as Postman. Since your application might be available at a different port, check the Azure Function Tool CLI console for the address of your HTTP function.

Let’s now add a few tests for the function that you just created. Create a xUnit test project in your solution and add the coverlet.msbuild and coverlet.collector NuGet packages to it. Now, add a few tests to the project. For details, check out the AzFunction.LoL.Tests project in the GitHub repository of this application.

Let’s use the AZ CLI utility to create a Resource Group and an Azure Function App for our project. The following commands will create a Resource Group named FxDemo, a storage account named lolfxstorage, and an Azure Function named LoLFx. You can choose other names for your resources and substitute them in the commands below. Remember to use the command  az login  to log in before executing the following commands.

Log in to the Azure portal and verify the status of all the resources. If all of them are up and running, then you are good to go.

Azure Pipelines automatically picks the build and release definition from the azure-pipelines.yml file at the root of your repository. You can store your code in any popular version control system such as GitHub and use Azure Pipelines to build, test, and deploy the application. Use this guide to connect your version control system to Azure DevOps. We will now define our integrated build and release pipeline.

Create a file named azure-pipelines.yml at the root of the repository and add the following code to it.

I like to adopt the Single Responsibility Principle (SRP) everywhere in my application code. Azure Pipelines extends SRP to DevOps by giving you the flexibility to write the definition of individual steps that make up your pipeline in independent files. You can reference the files that make up the pipeline in the azure-pipelines.yml file to compose the complete pipeline.

You can see in the previous definition that this pipeline will be triggered whenever Azure Pipelines detects a commit on any branch of the repository. Next, we defined two stages in the pipeline named Build and Deploy that will kick off to build and deploy the application, respectively. We used the same type of agent (VM with Ubuntu image) to carry out the tasks of building and deploying our application. Even if you are using an XPlat framework such as .NET core, you should always use agents that have the same OS platform as your application servers. A common platform ensures that tests can verify the behavior of your application on the actual platform, and any platform-related issues get surfaced immediately.

As you can see, I have stored all the templates in a folder named .azure-pipelines at the root of the repository. Let’s go through the templates that we used for the build stage. The first step that will execute is restore-packages, which will restore the NuGet packages of the solution.

The next step in the sequence is build, which will build the solution. We will set the  /bl flag to instruct MSBuild to generate a binary log. Since we want to investigate this log file later in case of issues, we will publish the file that contains the binary log as a build artifact.

The next step of this stage is test, which will execute all the tests. There are three individual tasks in this stage. The first task executes the tests in the AzFunction.LoL.Tests project with necessary flags set that generates code coverage report in Cobertura format in a folder named Coverage. The next step installs the Report Generator tool. The Report Generator tool takes the test report and converts it to an HTML report that would be visible in the Azure Pipelines dashboard. The final task publishes the Cobertura report that you can download later.

In the previous listing, the first step executes the  dotnet publish command and emits the application binaries in a folder named out. The next step copies the contents of the out folder to another folder named function in the ArtifactStagingDirectory. The final step publishes the function folder as a build artifact so that the contents of this folder can be deployed to Azure Function by the next stage.

Before we discuss the Deploy stage of the pipeline, we will take a detour to connect our Azure Pipeline to our Azure subscription to deploy our function. 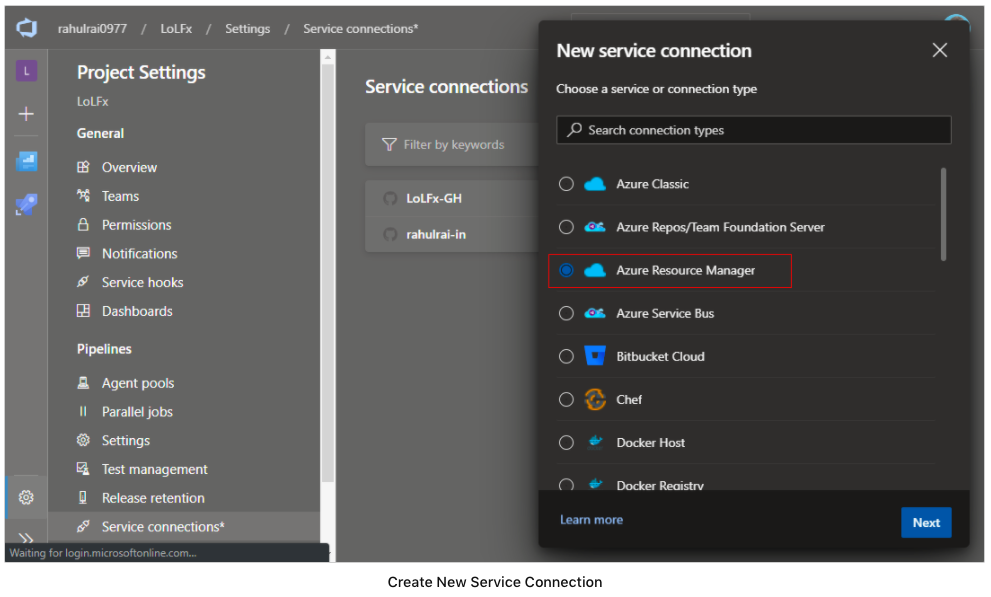 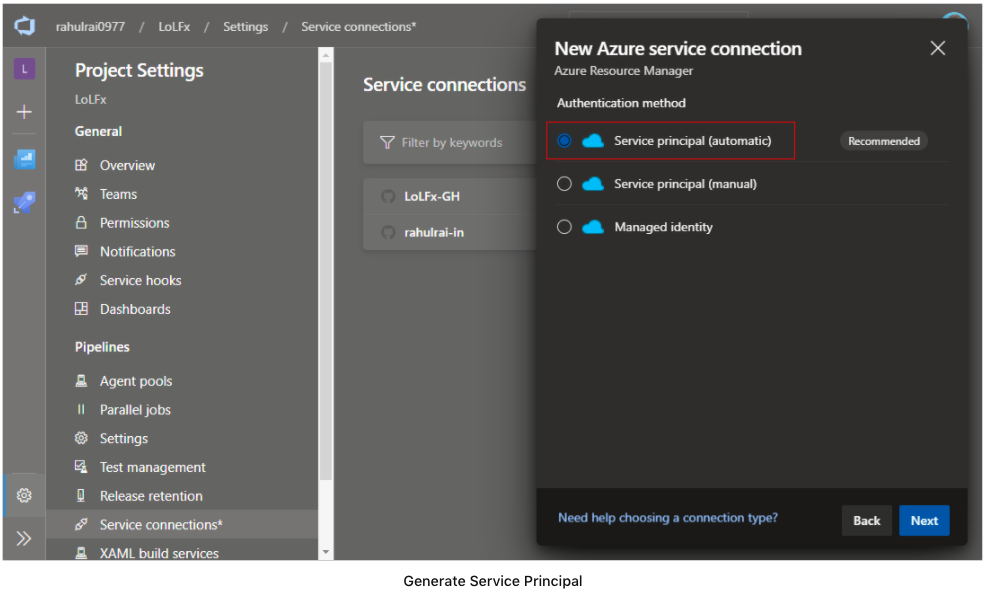 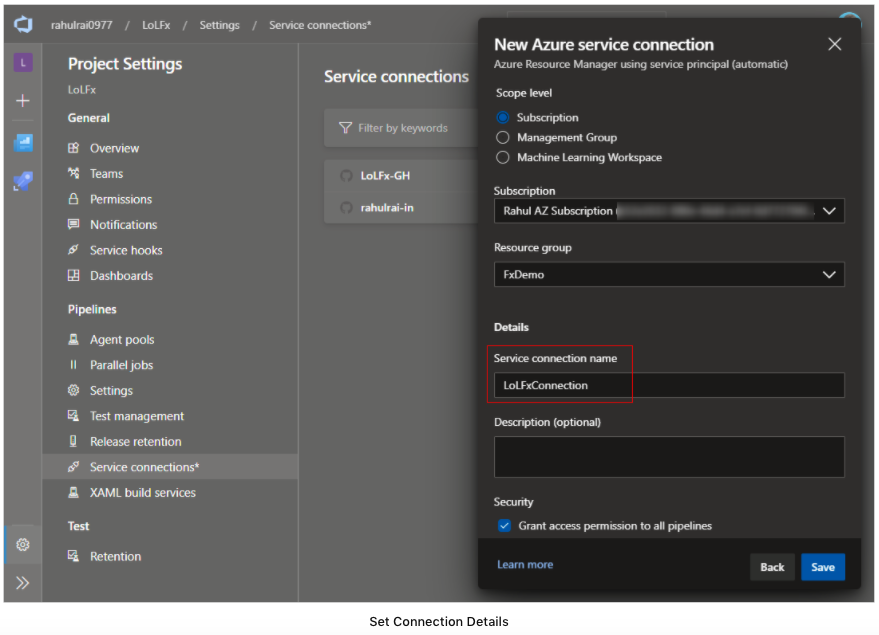 After saving the information, we will be able to use the name of the connection LoLFxConnection to connect to Azure from our pipeline.

Let’s discuss the steps that make up the Deploy stage of our pipeline. The first step in this stage is download-artifact, which downloads the Function artifact from the artifact produced by the Build stage.

Finally, the last step in the pipeline named deploy is responsible for publishing the release artifact to Azure function.

Note that we referenced the Azure subscription using the name of the service connection that we created previously.

We are done with the setup now. Commit the changes and push the branch to GitHub so that Azure Pipelines can initiate the CI/CD process.

After the pipeline that we defined runs to completion, navigate to the Azure Pipelines dashboard to verify whether both the stages defined in our pipeline succeeded. 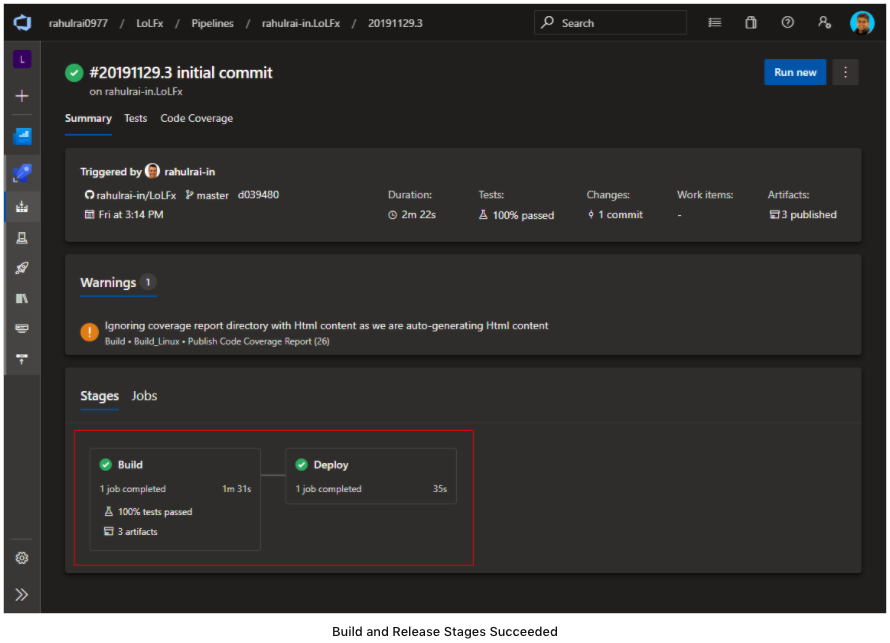 After the Build stage of the pipeline completes, you will find that a new tab named Code Coverage appears on the Azure Pipelines dashboard. The Report Generator tool generated the report that appears under this tab. 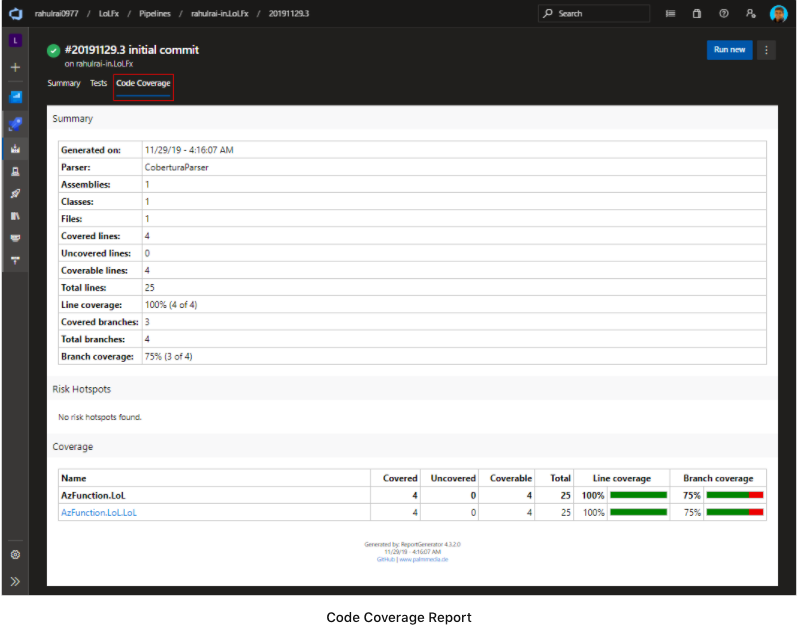 Let’s now download the binary logs generated by the build and study it with the MSBuild Log Viewer tool.

Navigate to the Artifacts published by the Pipeline and download the build.binlog file produced by the build stage of the pipeline.

You can open this file with the MSBuild Log Viewer tool to investigate the build process. Apart from assembly reference conflicts, and the build process, you will be able to see all the Environment variables of the build server in this report and list the build tasks that take the most amount of time. 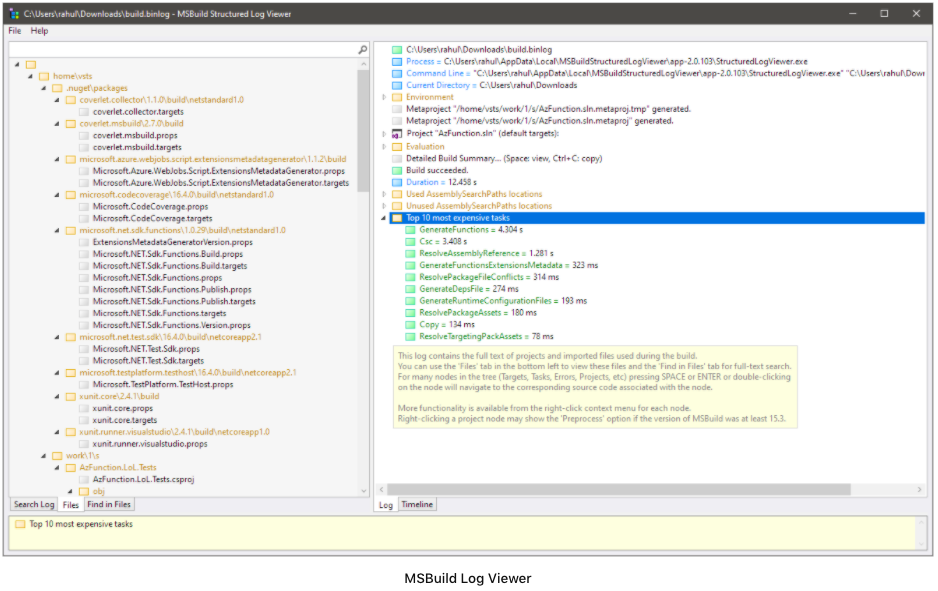 Build logs are critical for assessing issues with assembly conflicts, and diagnosing why the build is taking a long time on the server.

I will use cURL to send a request to the function that the pipeline deployed to my Azure Function resource. This is the command and the output generated by it.

To conclude, we went through the steps to compose an integrated CI/CD pipeline that builds and deploys an Azure Function. We also discussed a few essential utilities that can add value to your CI/CD pipeline viz. Binary logging, MSBuild Log Viewer, Coverlet, and Report Generator. I hope this article encourages you to evangelize these key features of Azure DevOps.

You can subscribe to my blog, The Cloud Blog, to get such articles delivered to your inbox. I am also working on a soon to be released FREE developer quick start guide on the Istio Service Mesh. Follow me on Twitter @rahulrai_in to access it before everyone else.