Sometimes it is necessary to impose certain order on the tasks in a threadpool. Issue 206 of the JavaSpecialists newsletter presents one such case: we have multiple connections from which we read using NIO. We need to ensure that events from a given connection are executed in-order but events between different connections can be freely mixed.

I would like to present a similar but slightly different situation: we have N clients. We would like to execute events from a given client in the order they were submitted, but events from different clients can be mixed freely. Also, from time to time, there are “rollup” tasks which involve more than one client. Such tasks should block the tasks for all involved clients (but not more!). Let’s see a diagram of the situation:

As you can see tasks from client A and client B are happily processed in parallel until a “rollup” task comes along. At that point no more tasks of type A or B can be processed but an unrelated task C can be executed (provided that there are enough threads). The skeleton of such an executor is available in my repository. The centerpiece is the following interface:

Using this interface the threadpool decides if two tasks may be run in parallel or not (A and B can be run in parallel if A.isCompatible(B) && B.isComaptible(A)). These methods should be implemented in a fast, non locking and time-invariant manner.

The algorithm behind this threadpool is as follows: 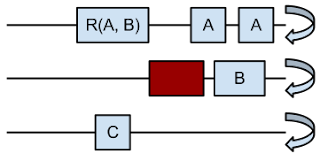 More information about the implementation:

Have fun with the source code! (maybe some day I’ll find the time to remove all the rough edges).

* somewhat of a misnomer, since there are still locks, only at a lower – CPU not OS – level, but this is the accepted terminology

** – benchmarking indicated this to be the most performant solution. This was inspired from the implementation of the ThreadPoolExecutor.