In Episode 1, we looked at how JVM evolved into an optimum VM, with JIT C1, C2 and HotSpot. In this blog, we will see how Graal replaces the C2 compiler and brings in a larger ecosystem of frameworks to support multiple non-JVM languages…

With large enterprises embracing CloudFirst approach, more and more we are building/moving critical enterprise applications on to Cloud. To truly realize the value of the cloud, and derive most optimum TCO, it's important that these applications are built on optimized runtimes.

I had listed a few critical non-functional requirements in Episode 1 (smaller footprint, faster startup etc), The following are a few more, that needs to be noted, before we ask “why graal”

Let's look at the stack that is published by Graal, and go through in detail, how it works… 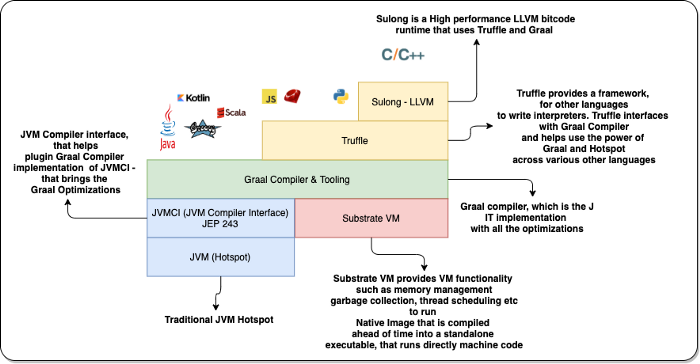 JVM (Hotspot): This is the traditional JVM HotSpot.

I published a detailed blog on the evolution of Java JIT & Hotspot, in Episode 1 Pease go through that here in detail.

The word compiler, I am referring to here, is not the javac type of compiler, this is the compiler within the JVM, (like C1, C2), that converts the bytecode to optimized machine code (instead of interpreter, as explained in the previous section)

Substrate VM: Native Images that are compiled “Ahead of Time(AOT)” into a standalone executable, run on the Substrate VM. Substrate VM builds in all the JVM functionality into the native image (such as memory management garbage collection, thread scheduling etc). 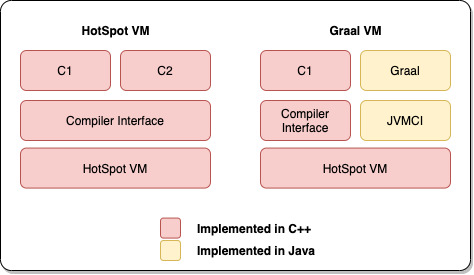 To understand how GraalVM is better than JVM and how it achieves this “Holy Grail” VM for all languages…we need to dig deeper on on 2 key components — Truffle and Graal VM.

Before we dig deeper, we need to have complete clarity on how JVM works, and optimizes the code, using the interpreters and compilers (C1, C2), please make sure you have already gone through Episode 1

Truffle is a language interpreter framework. It's a framework that the language programmers implemented and let their languages run on GraalVM, leveraging the optimizations that GraalVM provides.

To understand this better, if I am a language programmer, what I need to do is to write an interpreter using “Tuffle Language Implementation Framework”, and package them as components, that I can run on GraalVM, not worrying about writing complicated optimizations. GraalVM will take care of running the code optimally. I can choose to compile “Ahead-Of-Time” to Graal Native Image or “Just-In-Time”.

Graal can compile the code Just-In-Time (JIT, like C2) or Ahead of Time (AOT) directly to native image.

There is a general myth that AOT is faster, which is very true in the first few runs, but there is a possibility that the JIT might outperform the AOTs, as JIT is constantly optimizing (Graal VM/C2) based on the feedback it gets from profiling. JIT normally has a larger footprint, than AOT.

For Serverless — it makes more sense to go towards AOT, while for long running container based/VM based deployments, JIT might make more sense. 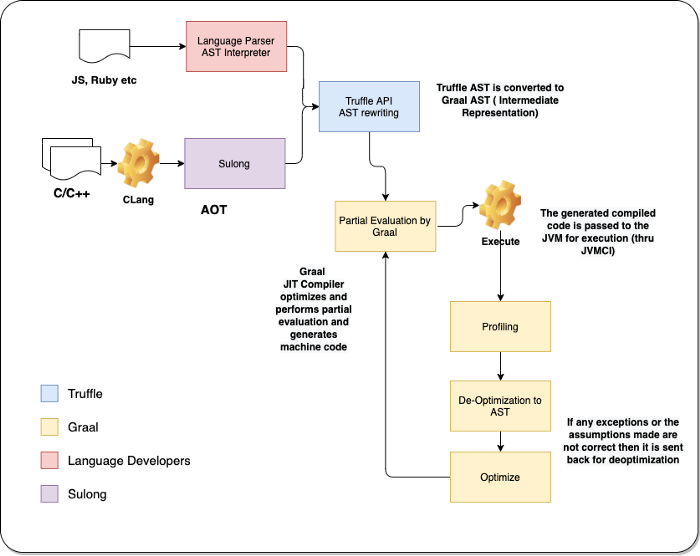 Abstract Syntax Tree is the intermediate representation. AST provides a very optimum way to represent the syntactic structure of the language, where typically the parent node is the operator, and the children node represent the operands or operators (based on cardinality). 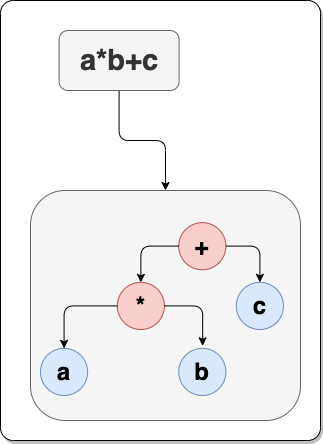 In this statement, a, b c can be any variables (for loosely typed languages). The interpreter starts assuming “Generics”, based on the profiling, of various executions, it starts assuming the specifics & then will optimize the code, using partial evaluation.

Partial Evaluation and De-Optimization: Truffle (language interpreters written with Truffle) runs as an interpreter, and Graal JIT kicks in to start identifying optimizations in the code. Here are some of the optimizations

The above optimizations is based on speculation, and eventually, if the speculation is proven wrong at runtime, the JIT will re-optimize and recompile (as shown in the diagram above). Re-optimization & recompiling is expensive task.

Partial Evaluation creates intermediate representation of the language, from the code and the data, and as it learns, and identifies new data types, it will deoptimize to AST Interpreter, apply optimizations, do the node-rewriting, and recompile. After a certain point, it would have the most optimum representation.

Graal Ahead of Time compilation is very powerful way to create native images, for a particular targeted OS/Architecture. For cloud native workloads and serverless, this is a very powerful option, for lower footprint, faster startups and more importantly embeddable runtimes (providing immutability). Imagine you Tekton/Jenkins pipelines build your code with this option, you already get a super optimum native image (assuming we are running them on a specific container runtime platform — which in most cases is built on linux).

Sulong is a high performance LLVM bitcode runtime that is built on Graal VM. Sulong uses Truffle and Graal as dynamic compiler.

LLVM is an open source project which is a collection of modular, reusable compilers and toolchains. There are lot of languages (C, C++, Fortran, Rust, Swift etc) compilers that are built on LLVM, where LLVM provides the intermediate representation (LLVM-IR).

Sulong pipeline, looks different from what we looked at other language compilers, that are running on Truffle., please refer to the diagram above, on how C/C++ code gets compiled.

There are various frameworks that are developed on GraalVM to provide a further optimizations, for building MicroServices, and go cloud native. Quarkus, Micronaut, Helidon and Spring are some of the popular frameworks, built on Graal.

We will be covering this in the next episode, in our journey towards the most optimum MicroServices architecture…

That's it for the Episode 2, and in Episode 3, we will explore how various MicroServices frameworks take it to the next step…

Please read Episode 3 here (coming soon…link will be updated, once the blog is published)