Usually, I just head to my local office in downtown Ballard, a neighborhood in Seattle that was and still is largely its own city. Today, however, I've boarded the 17x Express Bus into downtown Seattle. While in transit, as I always do, I just sat back introspecting on the day to be and the days of past while reading Jeff's post "From Evangelist to Developer Advocates" on our occupation title changes. Recently, we went from the somewhat inappropriately named Developer Evangelist to the more accurate title of Developer Advocate.

People have written about these titles in DevRel (Developer Relations) in the past, as have I. I wanted to add a few thoughts about these titles in this particular situation, and draw out some recent events where others seem to incorrectly, albeit with reason, conflate actual evangelism with advocacy. I'll wrap up with another specific word that is important — activism — and how that comes to play in the tech industry also.

Alright, let's get down to the real meat of the definition of the word "evangelism."

Evangelism: 1) "the winning or revival of personal commitments to Christ" and 2) "militant or crusading zeal." So yeah, wow. Not the actual intention.

Most uses of the word all center around spreading the gospel, specifically the gospel of the Christian God in the Bible, often in a militant fashion, with prospectively genocidal eradication of peoples. Somewhere in the late 80s, 90s, or something, some tech company (I think Microsoft, if memory serves) partially tongue-in-cheek dubbed an occupation position "evangelists" that would go out and "spread the good word" of the technology. I only know parts of the myth and origin story, but suffice it to say, it was kind of a joke that stuck. At this point, it's just been a title for well over a decade or two now. One that sincerely should probably not be used anymore, as I hope nobody is militantly pushing technology on others.

Another note, many of us referred to officially or unofficially as "evangelists" have gotten hit with this association in often negative ways. For example: 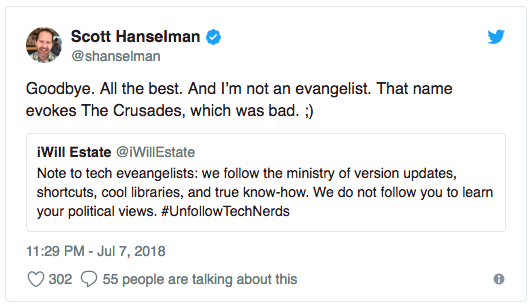 Follow that thread for the trash fire it becomes and the horror of the iWill Estate troll account. But I digress.

This is one of the dangers of tech appropriating titles and such. It tends to create societal blowback that is more than unwelcome. But on toward a better future and a better title, right?

But seriously, evangelists in technology aren't preachers, so being called an "advocate" is exponentially better in so many ways. It really is an occupation involved with the act of advancing, working with, and showing others certain tools, languages, or related technologies within the technology industry. In this way, using the word "advocate" in the title is simply a more accurate and effective choice. It isn't a word derived from jest; its definition aligns with the occupation, and in my not-so-humble opinion, it sounds a lot better. I am, and always will be, an advocate for many different things.

Over the years, I've done far more than merely advocacy work. I've worked in everything from labor, cooking, software development from startups to enterprises, security, teaching, enterprise desk jockey (I mean software engineer, but the difference is sometimes minimal), and a host of other work. Each had various ranges of activities that needed to be done that went far beyond the actual occupation title. A title is merely a poorly designed window that one can look into to see what an occupation entails. The real details need to be written down, and really thought about in detail outside of the title itself. The following is a list of the key things I do as a developer advocate.

One More Word: Activism or Activist

I added this word as often, when one advocates, one also gets to work with people who are and will be activists. Before I continue, the definition.

Activism: "a doctrine or practice that emphasizes direct vigorous action especially in support of or opposition to one side of a controversial issue."

There's a reason I bring up activism. It isn't specifically because of the current political climate in the world, but I'd lie if I didn't mention it's part of it. Activism is also interwoven into the software industry, from open-source software itself to the free software movement. It's a very important and distinctive activity in the software industry. I bring this up because of the important parallels and some of the callouts I wanted to make. Get involved — anybody can — here's the details.

Beyond this, I've been involved in a number of activist projects that are often convergent with advocacy, albeit they often involve parking, bicycle advocacy, safe streets, urban city design, and related transportation and urban planning work.

References, AKA More Reading on the Topic

An interesting post that simply asks the question and looks at some recent conversations on the topic.

This is a comment thread on Hacker News that is pretty insightful on the various opinions surrounding the various titles. It also has some interesting anecdotal information about what people have seen among Apple, Google, and other companies, and how they orient these positions to work with the community.

This is a post that popped out at me. What does this even mean? Based on the meaning of the words, it actually sounds super creepy.

Another post I dug up on the topic reminds me why we have so many hard issues with the actual definitions of words being drastically different from their general meaning in daily use. For example, this post seems to just skip over defining the words from the dictionary as a point of reference, and just runs with the writer's assumed definitions of what they've observed of the occupations using the word.

A few of my past posts.

It's complicated. There's no TLDR. So just read and keep learning.