Evolution can be cited as a metaphor for iterative development: every new iteration (or commit at an ideal smallest scale) produces a shippable, new version of the software that has evolved from the previous one.

Really simplifying the process, and skipping some steps for simplicity, we can see something like:

as a metaphor for:

Every metaphor has its limits: for example not all software descends from a common ancestor; variations in the new generations of software are not necessarily produced by randomness nor selected by reproductive ability of the software itself.

Still, we can take some lessons where patterns observed over million of years of evolution apply to a software development scenario.

If by any chance you happen to be a creationist it's better for you to stop reading this post.

Lesson: each step has to keep working

My father is a human, working organism. His father was too - and also the mother of his father. We all descend from an unbroken line of ancestors who were capable of staying alive and, during their lifespans, reproduce. This line goes up until ancestors 4 billion years ago who were unicellular organisms.

Thus evolution has to keep all intermediate steps working. Evolution cannot produce current versions who do not have value in the hope that they can be turned into something valuable later.

Value here is not necessarily money as it can be a user base or market share that can be monetized later: the investors market puts a price tag on a large user base but often not on a sound software architecture.

In fact, this lesson is a reality in capitalism-based companies whose funding is received through demonstrating business results; again, not necessarily profitability but acquisition, retention, growth metrics (Twitter) or revenue (Amazon):

No wonder tech is going the way it's going. People need something tangible in 3 months or no founding http://t.co/f370JW4C9W

Short-term capital investments are a very common business model in companies adopting Agile software development. They're not the only possible model to develop wealth: the Internet and GPS were created through generous public funding by the US government (which had its own military reasons).

If you take a look at the timeline of evolution on Earth, you'll see that it took a long time for more and more complex organisms to appear:

We can argue that flowers are simpler than dinousaurs, and I'm going to address this later, but we widely believe that modern age humans express the most complex abilities ever seen on Earth: speaking, reading, writing, and tool-building. It can take a long time too for a complex software and an adequate design to emerge purely from iteration.

Lesson: we may not be capable of anything else

Evolution has been wonderful at producing animals that can run while for robotics it was an hard problem to control artificial legs on disparate terrains compared to ordinary computation.

But, if we believe Gall's law, there may not be another way to get to complex systems than to pass from simple systems first. In a sense, robotics engineers have not designed robot dogs from scratch but evolved them from simpler artificial beings at a faster pace than natural selection.

Exercises on evolving a product in thin slices such as the Elephant carpaccio are often made fun of because of the triviality of the slices in a controlled exercise: "add an input field", "support two discounts instead of one". However, in a real environment the slices become more "launch the product in France for this 10 million people segment" and "launch for another segment of the population". To believe we can design the perfect solution and never slice the problem into steps really is a God complex. 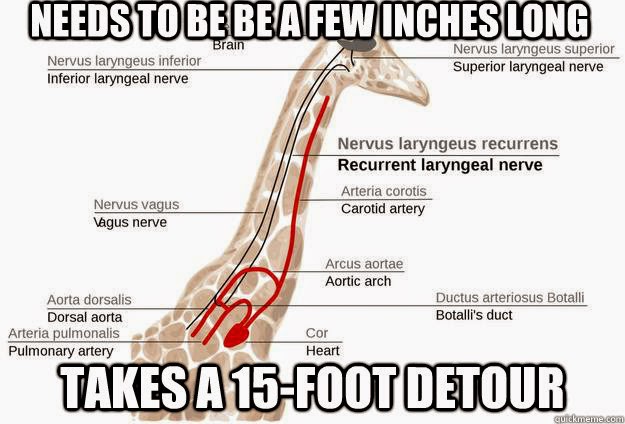 Humans and in general vertebrates have variants of the recurrent laryngeal nerve, which connects the brain to the larynx or an equivalent organ. This nerve developed in fishes, where it took a short route around the main artery exiting from the heart. It still takes this route today in humans.

However, giraffes have undergone a series of local optimizations (boy-scout rule anyone?) where the giraffes with longer necks outcompeted the shorter ones, raising the average length of their necks up to what we see today. The nerve grew with the neck as the only possible local modification that keep the new giraffe capable of living and reproducing itself was to lengthen the nerve, not to redesign it.

Longer nerves have a cost: the more cells they are composed of, the easier it is for them to develop diseases or to suffer injuries. An engineer would never do such a design mistake when trying to build a giraffe.

It is open to speculation whether it is possible to develop a giraffe with a nerve taking a shorter route: an engineer would surely try to simplify the DNA with this large refactoring.

But there may be, for example, embryological reasons that prevent giraffes from being able to be grown from an embryo if the nerve takes a different route. We often estimate the time for a new feature as a critical path where nothing goes wrong, but what if you have to take offline and migrate your database for hours in order to deploy this brand new, clean object-oriented design? Your perfectly designed giraffe may be destined to be stillborn.

Nature isn't bad or good: it just is. Local minima are a fact of life and software. We should take care not to preach local improvements as the silver bullet solution, nor to jump into too large refactorings which will kill the giraffe.

Lesson: you don't necessarily get better 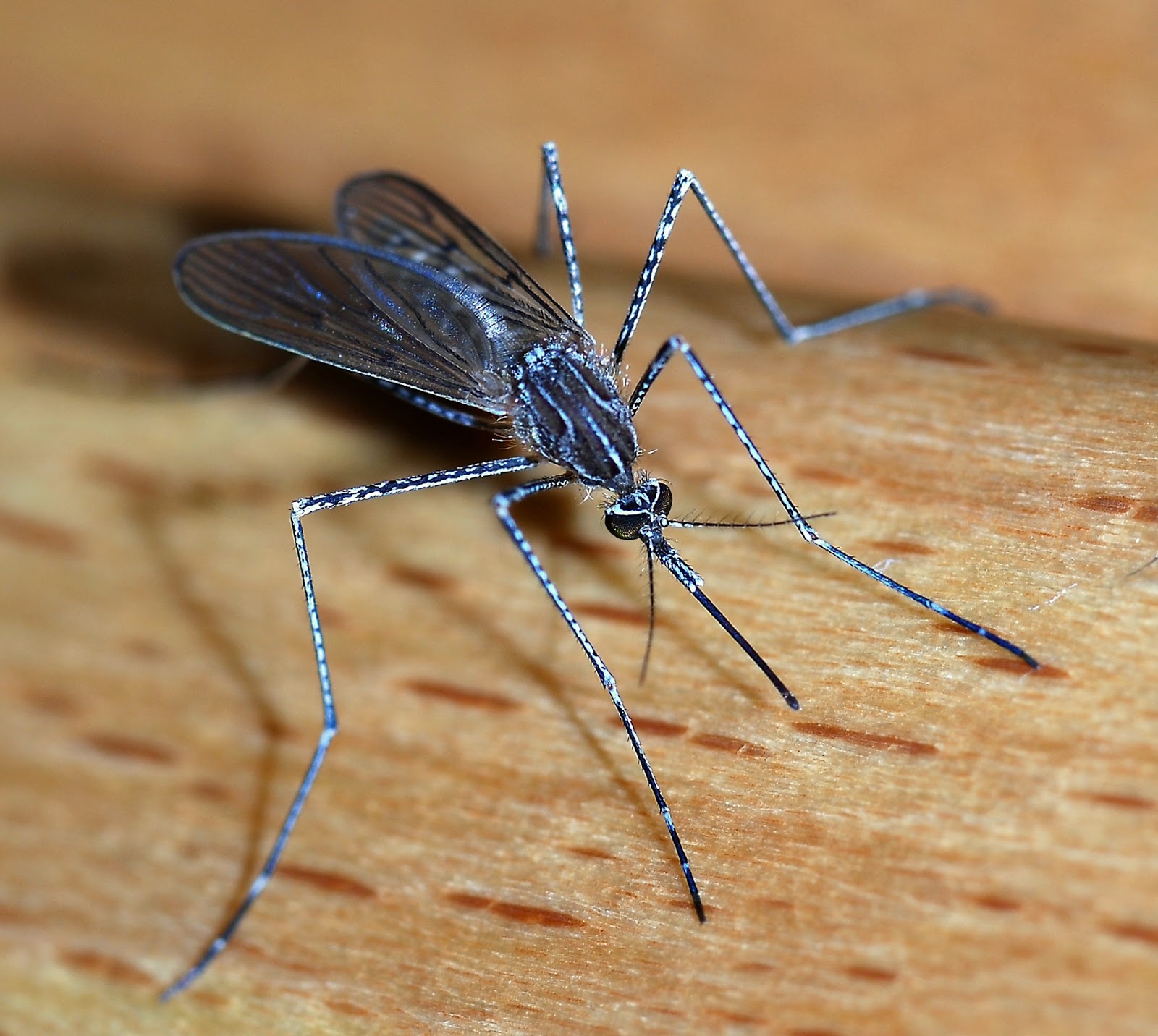 Fitness functions describe how well-adapted an organism is to its environment, and evolutionary pressure selects the organisms with the better fitness to survive for the next generations. Even when selective pressure is very slightly skewed in one direction, over many generations a trait may very well disappear or appear due to a cumulative effect.

Depending on your choice for fitness, you may get a different result. Modern-day mosquitoes evolved from the same tree of life as humans, so our evolutionary projects can either become humans, elephants, cats, cockroaches or mosquitoes depending on which direction the forces in play are selecting.

In fact, there are so many legacy code projects around that you wonder what has produced them. One line at the time, they evolved into monsters to satisfy the fitness function of external quality: add this feature, make more money, save server resources, return a response to the user faster.

Worse is better is another example of philosophy where for software is more important to be simple than correct. Simple software is produced and spreads faster than cathedral-like software, taking advantage then of network effects such as the newly created community to improve. We have seen that at work with C and x86 (and so many other standards), we are seeing it now with JavaScript and MongoDB.

Again, I'm not saying this is good or bad: I'm saying this is happening and that if you want to replace JavaScript with a better language you have to take this into account instead of complaining about it. One wonders how many extinct animals we have never heard about, which leads us to the last lesson of evolution.

Lesson: extinction is around the corner

Much of this article is a deconstruction of iterative development, as a way to swing the pendulum on the other side of the argument for once. There has to be a devil's advocate.

I will leave you instead with a final point on why iterative development is a crucial part of Agile. After all, even this post is iterative: written, edited and reviewed at separate times, I didn't write it with a pen and paper in fact but on a digital medium very easy to modify.

Why a species goes extinct? It may evolve into another species, but this happens very slowly. What usually happens is the member of a species are no longer able to survive in changing conditions or against superior competition. Which sounds like something extracted from a management book.

In fact, one of the fundamental maxims of Agile software design is to keep software easy to change. Resist the over-optimization of today to survive and thrive tomorrow, as we can't foresee the future but we can foresee that we will likely have to change.