Developers and DevOps teams considering the efficiency, scalability, and cost benefits that serverless functions have to offer shouldn’t be daunted by the challenge of securing serverless applications throughout development and into production. They should take it very seriously. In this article, I will cover how to begin developing serverless functions using AWS Lambda and the best development tools to use, as well as the most effective serverless security strategies and best practices.

As soon as an invoked serverless function begins its runtime, the clock starts on security risks. This is especially true when it comes to user input, which is a serverless function’s largest attack surface at runtime. Malicious user input can include SQL injection, designed to exploit (or even delete) data. Similarly, cross-site scripting (XSS) attacks can inject scripts onto the microVM running a serverless function. While the microVM will spin down once the function is finished executing (or times out), XSS attacks can gain a foothold within the serverless environment and launch other processes to escalate dangerous attack kill chains.

Runtime security protections that safeguard serverless functions can run either as a layer of the function or as a parallel process. These protections can verify the integrity of user input, and monitor files, processes, and connections for any abnormal or malicious behavior.

However, protections that activate with each invoked function add to the length of running time and, with serverless, every 100ms that a function runs add to the cost. Loading larger code packages and added latency also have negative impacts on performance. While I can see for some applications, for example, those responsible for financial services or critical infrastructure use cases may find the runtime security for serverless is indispensable.

In general, serverless functions already have many secure mechanisms going for them. Malicious efforts cannot alter a function’s code at runtime, because it runs only as an instance. With serverless functions running on cloud services such as AWS Lambda, the cloud service provider ensures protections from DDoS attacks, DNS attacks, TCP SYN attacks, and session hijacks. Just by following coding best practices and keeping the logic of each function simple, it’s possible to render runtime security all but unnecessary. At some future point when functions feature longer timeout values and larger code sizes, runtime protection for general serverless functions may become more necessary.

Pre-execution examination should adhere to the following security checklist. The first three points are unique to serverless security needs:

These safeguards must be integrated within the CI/CD pipeline and protect functions and resources at a scale far beyond what human interventions can keep up with – and thus security automation is necessary.

As for the second phase, post-execution forensic analysis is enabled by an array of cloud provider tools. For example, AWS Lambda serverless functions can be monitored and analyzed using AWS CloudWatch, AWS X-Ray, AWS Security Hub, AWS GuardDuty, or the more-recently-added Amazon Detective.

In the following examples, we will use AWS Lambda, which features native support for Java, Go, PowerShell, Python, Node.js, C#, and Ruby. If using Python, Node.js, or Ruby, it is possible to create a serverless function through the web-based AWS console, as in the screenshot below. Note that the text editor that AWS provides for writing a function is not suitable for creating larger functions that leverage multiple files, libraries, and dependencies.

Another option is to use the AWS Command Line Interface tool (CLI) to submit functions developed locally. AWS CLI installation and configuration instructions are available here.

All source code files for a locally developed function can be placed in a zip file and uploaded to the AWS CLI, as shown below. 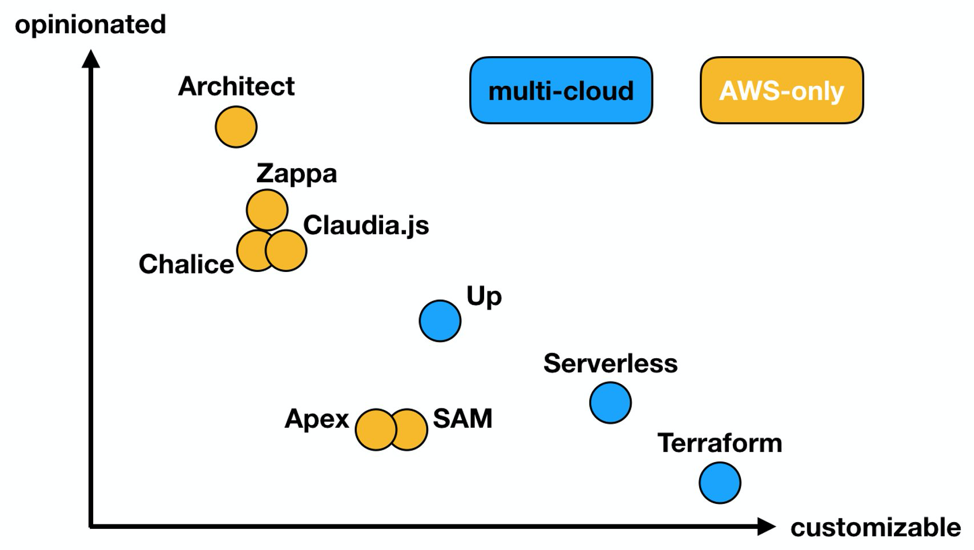 Serverless Framework (SLS) is the most popular development tool currently, having earned over 38k stars on GitHub. AWS Serverless Application Model (SAM) is another popular choice. These tools enable developers to build a serverless project in a serverless.yml file, and translate the project to a CloudFormation template that AWS will use to create all needed resources. Specifically, both SLS and SAM offer:

SLS also features a list of more than 1000 existing plugins ready to vastly improve and simplify serverless function development, while also making it simple to write new plugins as needed. Below is a small sample of the plugins available.

Here are six rules to follow in order to develop secure serverless applications:

1. Keep your code base well organized. Separate resource definitions from your functions. Leverage resources as parameters, not as hardcoded strings. Utilize code sharing, and reduce package sizes as much as possible.

Here we have another example (provided by Serverless Stack):

2. Restrict identity and access management (IAM) roles to each individual’s function, adhering to the principle of least privilege.

3. Use a service such as AWS SSM Agent to manage secrets properly.

4. Each single serverless function should perform a single task. If the output of a function requires further processing, save the output to a data store and have that save action trigger a new function. Do not use a current function to call another function.

5. Minimize remote connections as much as possible. A function should mostly process input locally no matter how complex, and return the result. Remote connections add to latency and create debugging and scaling issues.

6. Reduce dependencies as much as possible. Place them in a shared layer and perform regular security scanning.

There you have it – the benefits of serverless functions and peace of mind of knowing they are secure.