No, these aren’t the words of some anti-recycling freak trying to popularize anti-recycling manifesto over social media. This whole thing is written using a language model…an algorithm…an AI if we are being crass.

GPT-2 is a generative model, created by OpenAI, trained on 40GB of the Internet to predict the next word. And OpenAI found this model to be SO good that they did not release the fully trained model  —  which some say is against their founding motto of making AI open to all  —  due to their “concerns about malicious applications of the technology”.

What Malicious Applications Are We Talking About?

Open AI says, “We can also imagine the application of these models for malicious purposes, including the following (or other applications we can’t yet anticipate):

“But Is This Model REALLY That Good?”

Or are the above concerns merely the opinions of some paranoid people?

This model did not present some big leap on the algorithmic front. It is just a larger version of the GPT model that was published by the team months ago.

What it did do was show how capable our current language modeling techniques are in text generation. It is a massively scaled up version of its predecessor. GPT-2 has a whopping 1.5 billion parameters (10X more than the original GPT) and is trained on the text from 8 million websites.

You can understand the feat of this model once you compare it with other “popular” generative language models.

But First, an Aside —  A Very Simple Explainer on Language Models

For example, just watch this (hilariously genius) sci-fi short film released in mid-2016 whose script was created by a generative model using LSTM architecture trained on the scripts of a lot of sci-fi movies and tv shows:

They got Thomas Middleditch  —  Silicon Valley’s Richard  —  to star in this!!

Or how about this Harry Potter AI-generated fanfiction that shot to popularity in the end of 2017 and: 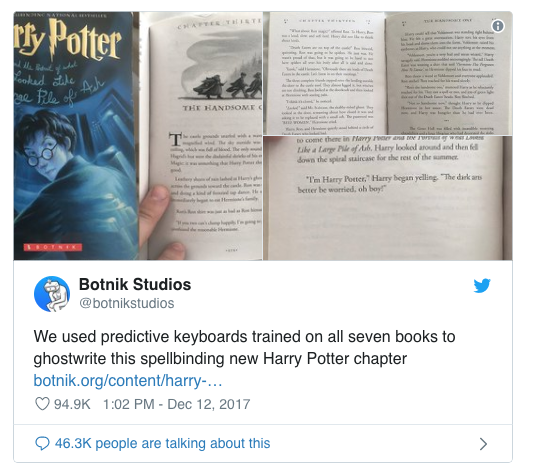 As you can see, both of these are much inferior in quality as compared to the GPT-2 example. Open AI has cherry-picked and published a few more samples on their blog post — Better Language Models and their Implications. 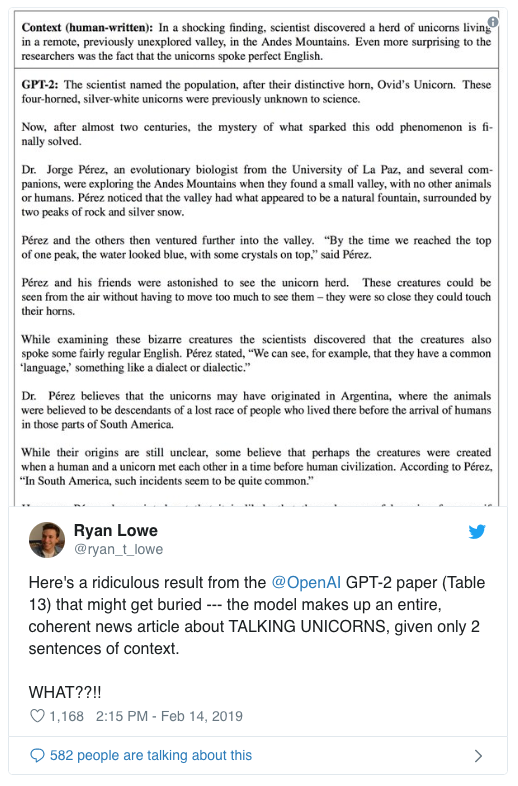 And it’s not just these 8 cherry-picked examples. Open AI also provides us with a dump of hundreds of raw GPT-2 samples, which can give us a clearer picture of the model’s capabilities.

This article argues that “if you skim text, you miss obvious absurdities. The point is OpenAI HAS achieved the ability to pass the Turing test against humans on autopilot.” So if you aren’t really concentrating and just skimming through, you won’t be able to spot that this was generated by a language model. Now, that is definitely not true for the other examples that I presented above. Even “reading like” normal human-generated content is a big feat.

So, yeah. I would say that this model is really good.

The Effect Of Not Releasing The Weights Of The Model

The fact that Open AI did not release the model came as a huge shock to the AI community and the media.

Some people argue that this was just a publicity stunt on part of Open AI because there was no algorithmic feat. And another group of people believes that this attempt would be futile since the code is open-sourced and big-companies/ people-willing-to-spend-enough-bucks-on-compute-resources would be able to replicate the results in just a few months’ time.

But there is another group of people who are applauding Open AI for trying to create awareness among the researchers about the effects of the results of their research. As AI techniques become more and more powerful, the world will face an important challenge to fight synthetic content and misinformation. 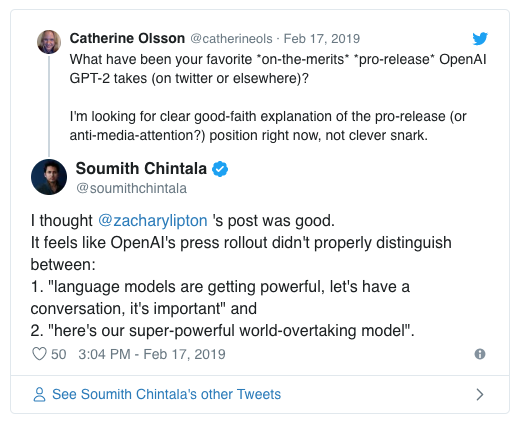 Soumith Chintala is the creator of PyTorch. This is a thread between him, Jack Clark, and Jeremy Howard!

So wouldn’t it be cool to know how it works; to know the algorithm that powers it? Stay tuned for part 2.