We Have the Data, But Can We Use It?

It is no secret that the wearable technology market has been growing since the early days of fitness tracking. Consumers bought fitness bands and smartwatches in droves, but many of those devices have ended up in sock drawers due to a broken user experience. Now, wearables are evolving past smartwatches into shirts, tattoos hats, shoes, and more, as sensor technology improves to eliminate the need for wrist worn devices. The value of wearable technology is not in the hardware, but in the data that is collected from the devices- and consumers are experiencing trouble trying to make sense of it all.

The sheer volume of personal data collected from wearable devices is impressive, but the true value comes from interpreting it all. The use cases for wearable data are extensive and diverse, ranging from athletes tracking performance to doctors tracking patient recovery to everyday people tracking steps, sleep, heart rate, and calories. It is the applications that are the pathway to interpretation, allowing data to be understood and useful. However, looking at over 136,000 consumer reviews of Wearable devices and applications from November 2015 to February 2016, there is a clear difference in delight reported for devices and applications, as shown in the graph below. Devices are surpassing the associated apps in terms of consumer delight.

Consumers are far happier with their Wearable Devices than the apps they use to interpret the data they collect, as shown in the chart below. Samsung and Lumo Body Tech see the highest delight ratings for their hardware, while consumers are generally disappointed with Jawbone devices. Despite this discontent with Jawbone bands, consumers prefer the company’s app to other popular options. The presence of a gap in delight between hardware and software is not specific to Jawbone, as other companies see higher delight for their devices than their apps. Even when consumers are happy with the device and all the things they can track and monitor with it, consumer satisfaction falls when looking at feedback about the apps people are using to store, track, and interpret this data.

This gap brings up a question wearables manufacturers have been trying to answer for years: how is this information useful? Wearables are aspirational devices, especially when being used for fitness and personal health. They do a wonderful job of collecting data, but without interpretation of this data to inspire action and promote change, the devices become dispensable. 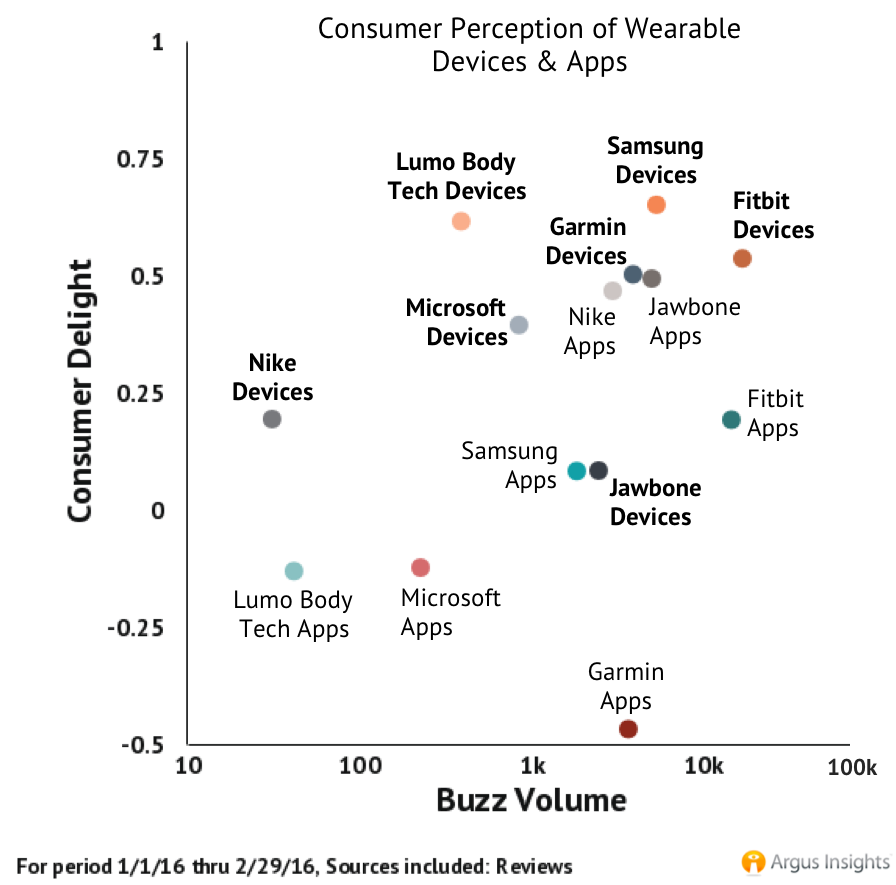 There is a gap in delight between wearable devices and apps.

Consumers are enjoying Nike and Jawbone apps, though complaints of a fragmented app ecosystem span across consumer feedback. Users are looking to have all the information they want and need in one place, so integration among apps is very much appreciated. Jawbone Up is leading delight as users dub it a “great all in one app,” and are especially impressed with the accessible insights from the SmartCoach. The ability to keep track of food intake, calories, sleep patterns, steps, heart rate and even integrate with other apps to track different exercises all contribute to the high rate of consumer approval. While Nike is no longer a big player in Wearable hardware, smartwatch users like to use the Nike+ Running app to track their runs but are frustrated that Nike+ Running does not sync with other apps. While delight for Nike and Jawbone Apps is on the rise, Fitbit, Samsung and other apps are seeing consistently low consumer satisfaction. 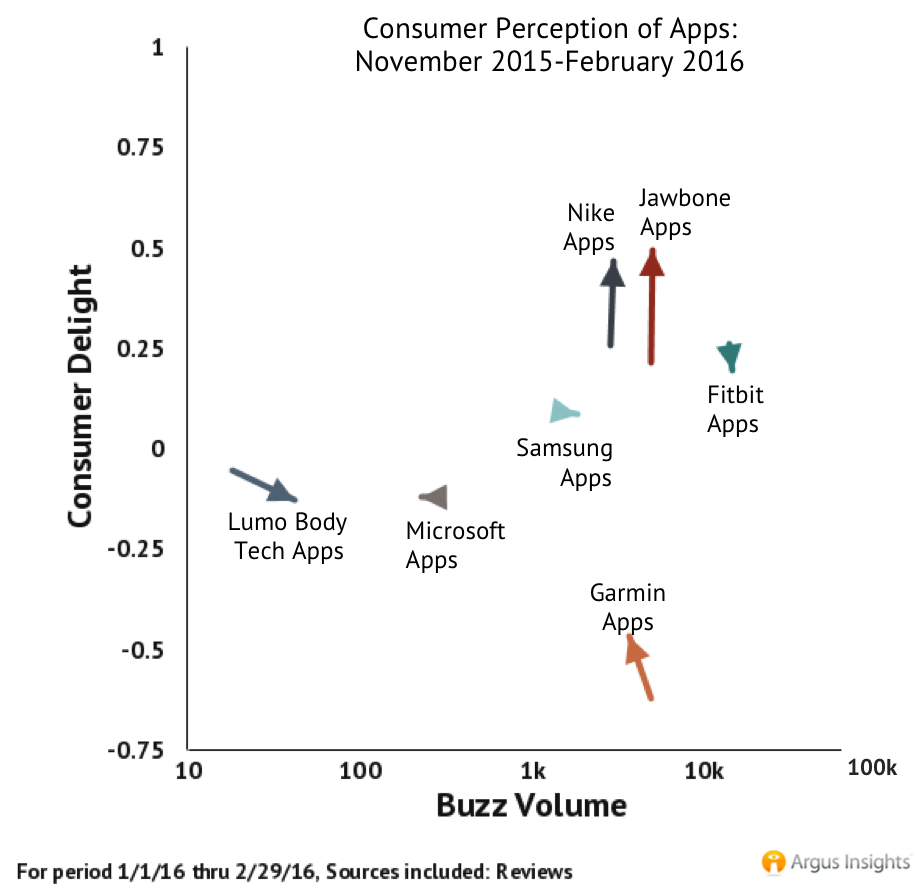 Consumer delight is increasing for Nike and Jawbone apps while users reamin disappointed in apps from other brands.

Consumers are enjoying wearable devices more than the apps they use in conjunction with their fitness bands and smartwatches. Examining the content of consumer reviews of apps reveals what is causing this break in the end user experience. The funnels below are sorted by percentage of sentiment (negative on the left and positive on the right) to display the most frustrating and loved features, topics, and attributes discussed in consumer reviews of applications. While consumers enjoy using wearable apps in their quest to reach personal health goals, logistical problems with syncing bands to apps and data across devices lead to widespread frustration. App functionality is causing frustration as well, as several users complain that their apps crash and fail, leading to infuriating load times and even lost data. 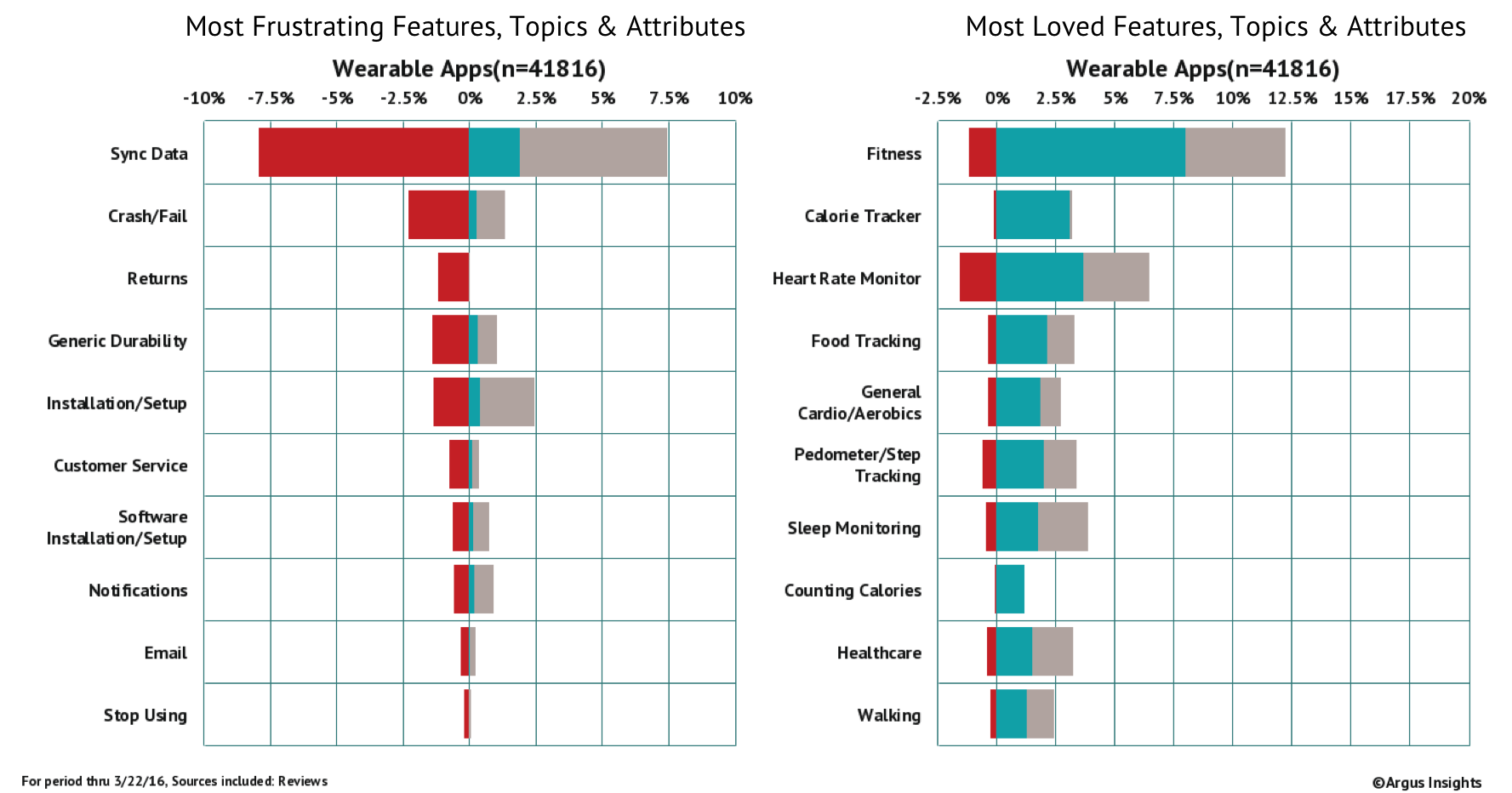 Consumers enjoy using wearable apps to track various metrics and activities but are frustrated with the transfer and interpretation of the data.

As wearable technology continues to improve with better components and design, devices are becoming more standardized. There is a clear need to improve the user experience with the applications used to interpret all the data these devices collect.

While Jawbone consumers are not impressed with the company’s fitness bands, they like the Jawbone Up app because of all the features it offers to make personal data actionable. Other hardware market leaders like Fitbit and Samsung see a discrepancy in consumer feedback with content hardware users, but disappointment for their applications.

As sensors become more prevalent and accurate and even begin to migrate out of wrist-worn devices, corresponding applications will only become more important to the end user experience. Companies must present and integrate all collected personal data in a simple, understandable way and also inspire users to take specific action based on this information.