by reading the article, you will learn the points given below:

let’s begin with an introduction to exception handling mechanisms. when we write some code and execute it in .net, there is a high possibility of one of the following errors occuring:

this error will occur by typing the wrong syntax like missing double quotes, terminators, etc. we as a programmer can identify these minor errors and easily rectify them.

this error occurs when the program is compiled, and the errors, like assigning wrong data to a variable, creating an object for the interface, etc., occur. this error can be identified and rectified before the execution of the program.

this error will occur at the time of executing the program. some typical errors are: entering the wrong data into a variable; and trying to open a file for which there are no permissions, which are trying to connect with the database with the wrong credentials.

what is an exception?

methods to handle an exception:

there are two methods to handle exceptions, which are given below:

let’s see a sample program on how to handle an exception, using logical implementation: 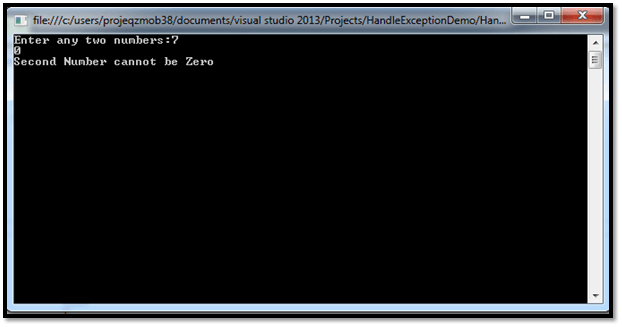 when the user enters the second number as zero, an exception will be raised. this is handling, using logical implementation.

this block contains all the statements in which there is a possibility of an exception occurrence.

this block contains all the statements to handle the exception, which is raised within the try block.

your output should appear as follows: 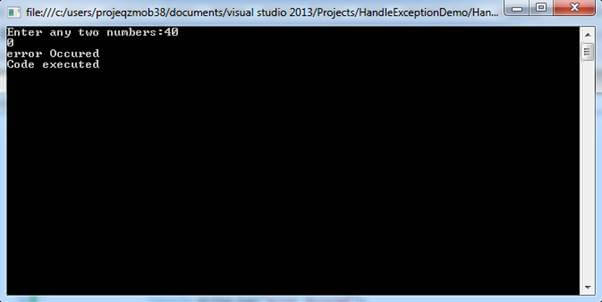 a list of exceptions that occur in real-time scenarios is given below:

i hope this article helps you gain knowledge on an exception handling mechanism in .net.

thanks for reading and let me know your valuable comments.