As the scale of deep learning networks increases, the computational complexity also increases accordingly, which severely limits its application to smart devices such as mobile phones. For example, the use of large-scale complex network models such as VGGNet and the residual network on an end device is not realistic.

Therefore, we need a deep learning model to perform compression and acceleration. We have described two major compression algorithms below.

The Low Bit model refers to compressing consecutive weights into discrete low-precision weights. As we have shown in the image below, the parameters of the original deep learning neural network are float variables and need 32 bit storage space. If we convert them into a state with only three values (0, +1, -1), then storage takes just 2 bits, significantly compressing the storage space and simultaneously avoiding multiplication operations. Only the symbol bit changes to addition and subtraction operations, thereby increasing computation speed.

Next, we will use a binary network as an example to explain the above compression process. First, suppose that the optimized function of the original neural network is f(w), and the limiting condition is that the parameters of the deep learning network are constrained to within C. If C is (-1, 1), then the network is a binary network, as below:

We will use ADMM to solve when the objective function is f(x)+g(z), and where the constraint condition is the optimization of Ax+Bz=c. First, write the Augmented Lagrangian function, and then convert the above problem by solving xyz:

That is, the minimum of xz is solved first, and then the updated value of y is obtained accordingly. The above is the ADMM standard solution. Next, let's see how we can convert the Low Bit Neural Network problem into an ADMM problem. First, we need to introduce the indicator function, the form of which is as follows:

Then, we need to introduce a consistency restraint. Here we introduce the variable G and constrain W = G, so the objective function is equivalent to:

After adding this helper variable, we can transform the optimization problem of the binary neural network into an issue of ADMM standard. Next, we write the formula for Augmented Langrangian and use the ADMM algorithm to reach the optimization goal, as we have described below:

Aside from the binary network described above, there are also the following common parameter spaces: 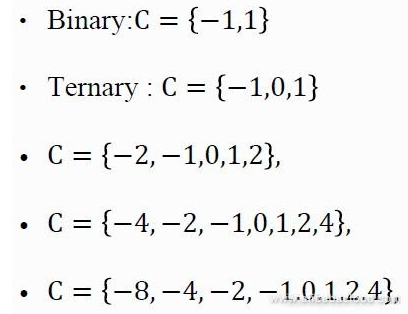 After adding 2, 4, and 8 as values in the parameter space, there is still no need for multiplication. Instead, we need only the shift operations. Therefore, this replaces all multiplication operations in the neural network with shift and add operations.

We have shown the final optimization results after applying the above Low Bit model to ImageNet for classification in the following table:

In terms of detection, the algorithm still features high availability as you can see in the following table:

We drew the data for this experiment from Pascal VOC 2007. According to the data in the above table, the accuracy of the detection results in the three-value space is almost negligible compared to the full-precision parameter space.

The sparse neural network is suitable for cases where most of the parameters in the network are zero. We can simplify the storage parameters using a simple compression algorithm, such as run-length coding, to reduce the parameter storage space significantly. Since we cannot involve 0 in the calculation, a large amount of computation space is saved, which greatly increases computation speed. In sparse networks, the optimization goal is still the same as above, but the restrictions get changed as follows:

We can obtain the falling gradient for f(w) and used it in successive iterations. In each iteration, we will perform connection pruning according to the standard that the smaller the W parameter, the less important it is. When we change small parameters to zero, we can maintain sparsity.

However, there is an obvious problem with the above solution, as we have described in the following figure: 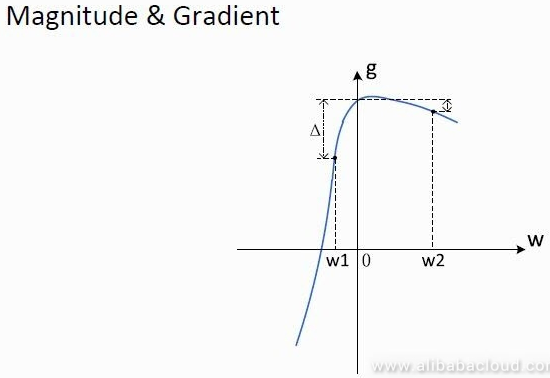 W1 is closer to 0 than w2; however, if w1 is set to zero, the loss to the function is higher. Therefore, when determining the importance of w, consider the size and slope simultaneously. You can set it to zero only if the value of w and the slope are both low. Based on the above criteria, we conducted a rare experiment on Alexnet and GoogleNet, as we have shown below:

We can see from the above image that whether it's a pure convolution network or it's inside a fully connected layer network, it can reach a sparsity of 90%.

We have described the sparse and quantized methods above. In Experiment 1, we have applied the two methods to Alexnet at the same time. The results are as follows:

We can see from the above image that at 3 Bits, when the sparsity is 90% or more, the loss of precision is almost negligible, with a compression rate of more than 82 times.

In Experiment 2, we applied both methods to ImageNet and Pascal VOC. Among them, P was sparse and Q was quantified. From the results in the figure, we can see that the accuracy loss of the experimental process was minimal, and the speed of inference in ImageNet was significantly improved. Pascal VOC can reach a sparsity of 88.7%, quantified in 3 bits with a compression ratio of 40 times. This is only a one-point drop from the full-precision network mAP.

We established a Gauss training platform based on the above two methods. The Gauss training platform currently supports several common types of training tasks (like facial recognition, OCR, classification, and supervision) and models (like CNN and LSTM). It also supports the training of multiple machines and we can set it with the smallest number of parameters possible, reducing the amount of effort required from the user. 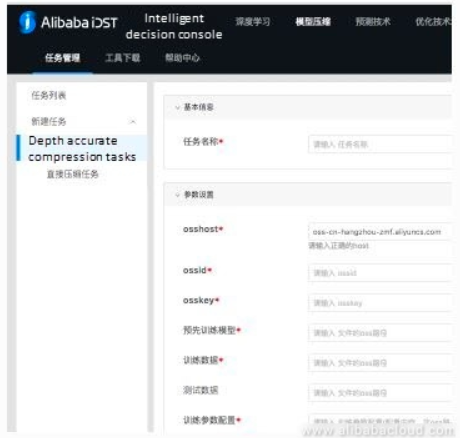 Even after the establishment of the training platform, the actual use of the model still requires efficient forward inference tools. We can implement Low-bit matrix calculation tools quickly using low-precision matrix calculation tools like AliNN and BNN. After implementation, the reasoning tool is 2-5 times faster than competing products on the ARM platform and three times faster on Intel platform.