To implement automation for microservices or applications deployed to a large number of systems, it becomes essential to externalize the configurations to a secure, scalable, centralized configuration store. This is necessary to be able to deploy the application in multiple environments with environment-specific parameters without requiring human intervention and without requiring modification to the core application during automated deployments, scaling, and failover recoveries.

Besides the fact that manually managed configurations involve the risk of human error, they are also not scalable for 24x7 large-scale deployments, particularly when we are deploying several instances of microservices across various infrastructure platforms.

It is a standard security best practice to periodically rotate the application credentials to ensure housekeeping and to avoid misuse over time. Having credentials externalized ensures the reliability of the system and reduces human error/dependency. If the whole accountability of maintaining the credentials lies with few superheroes it is considered a threat to business continuity. There are various tools available in the security domain to handle the federated access to privileged credentials.

In this article, we look at one of the solutions to this problem using the tool called Vault. Here are some of the reasons why we chose Vault:

In this article, I tried to consolidate some of the simplest methods to integrate with Vault with 5 primary programming languages/tools we mostly work with. If I have missed one of the mainstream languages, it is likely API library exists for the same and conceptually can be implemented in a similar fashion.

We will look at the following examples:

Although a lot of documentation exists on this topic, the question keeps coming back to me, as our team found the examples and documentation a bit difficult to get started. So I decided to write these simple kickstarters to get us started with the least amount of steps.

The code for this article is hosted in GitHub.

Ok then, let us get started with setting up Vault first.

In the production environment, you would run Vault in server mode: https://learn.hashicorp.com/tutorials/vault/getting-started-deploy. The high availability backends and HA configurations for Vault are available at Vault-HA.

Once Vault is up and running, we can login to Vault with either the token provided above or obtain it from the console. We would enable the Key Value engine at location kv if it is not already enabled. For this use case, we enabled userpass authentication, although in enterprise environments LDAP authentication would be pretty standard. The user experience does not change. Vault will be able to provide a seamless API experience regardless of the authentication method. We only need to change from /auth/userpass to /auth/ldap in API call.

Now, to manage or read secrets from Vault, we would need to set up the policies to manage/access the secrets. You would want to set up this structure according to our project/applications hierarchy. In this example, we are going to create two simple policies. The Application admin policy can be assigned to Application admin who would be able to login to Vault and generate either a token capable of managing the configurations of the app himself, or a read-only token that allows only read-only capabilities to the configs.

Please note that in all the below examples we are using pretty standard variables which need to be provided according to the location of your vault during the launch of respective samples. 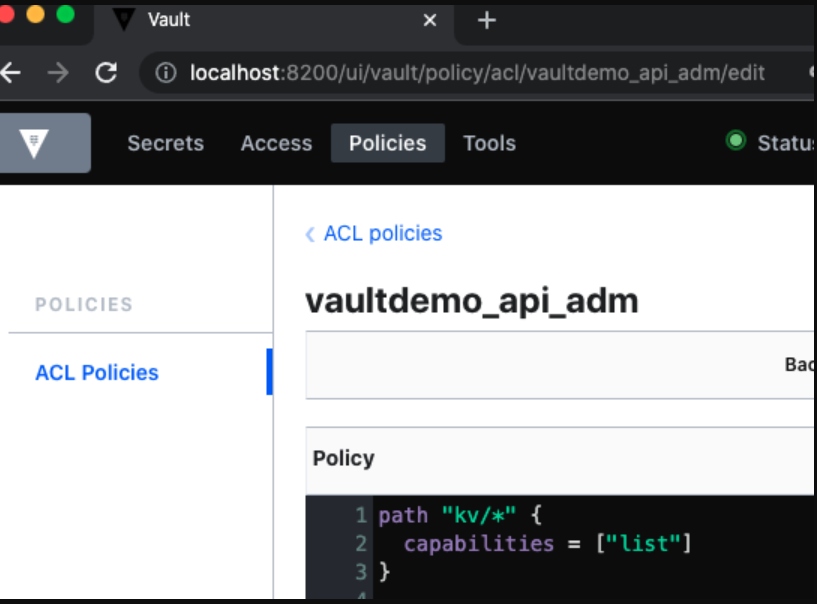 This policy allows the user to, first of all, be able to list the contents in key value store (kv); and then, allows our safe location kv/amitthk/vault-demo/dev* to be editable.

We created a user named vaultdemoadm under userpass authentication method:

Our user vaultdemoadm will then be able to login to the Vault via UI and save the key value pairs as in the below image.

Users can also login from CLI or API interface and update the above values.

This gives us a response as below. Here, our token is client_token:

The following command will be used to generate the token. (Remember to replace <<api_admin_user_token>> below with token from your login above.)

We can also use the above token to generate an API admin token for a longer lease time.

Now let us use the config values stored in Vault above with our apps. We will be using our readonly token to read these values in the below examples.

The most basic way of interacting with Vault here is to interact with the API directly with cURL and then use jq to parse the response. The following code snippet from /shell/vault_draw_kv.sh in the project directory does the same.

Note: You either need to install jq yum install -y jq or use Python and pip install requests.

Take a look at following code snippet from /python/vault_withdraw_secrets.py file in project directory:

For another implementation that we basically use with our LDAP authentication (for the api_readonly user), please check https://github.com/amitthk/vault-intgs/blob/master/python/vault_withdraw_secrets_ldap-auth.py in the project directory.

In the second scenario, we are going to take a look with a Java application. To integrate Vault to our Java application, first let us add following dependencies to our pom/gradle:

Bootstrap is needed to integrate the Vault values during bootstrap of our app using following bootstrap file:

That is all. Now we can use our variables directly in our application.properties as below:

For Python, we have some of the scripts above which interact with API interface. For our Flask API in the example directory https://github.com/amitthk/vault-intgs/blob/master/python/webapp.py, we use hvac client library (remember to pip install hvac ). The below code does the integration:

For Node.js integration, we used the node-vault library npm install --save node-vault . The code in example directory https://github.com/amitthk/vault-intgs/blob/master/nodejs/index.js is a simple HTTP web server which uses following code to fetch config from Vault:

One of the important use cases for our automation is Ansible, which we pretty heavily use across all Linux based systems. Ansible comes with lookup plugin which can directly integrate with vault. In our example, we are setting variables from vault as below:

In this article, we understood why we should externalize our configurations to make our automated deployments more consistent, scalable, and reliable. We looked at how we can use HashiCorp Vault to solve this problem and various integration options available with HashiCorp Vault.

Published at DZone with permission of Amit Thakur. See the original article here.