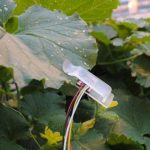 i’ve written a number of times recently about the increasing digitization of agriculture, with huge amounts of data being generated to inform everything from irrigation to the health of livestock. one of the more interesting trends is the use of drones to capture crop data to better inform irrigation and fertilization of the crops.

a recent project from researchers at penn state suggests an alternative method of capturing such data. rather than relying on drones, they utilize plant-based sensors that are designed to capture the thickness and electrical capacity of leaves.

the system would be capable of continuously monitoring plant water stress, which is hugely important in arid regions. it’s a process that has traditionally required laborious work in the field.

by contrast, the leaf sensor system provides the ability to measure leaf thickness and electrical capacitance in real-time, something which the team believes has never been achieved before. their work was tested in a lab environment on a tomato plant, with measurements taken at five-minute intervals.

they were able to detect noticeable changes in the thickness of the leaf as soil-moisture levels began to decline.

the team hopes that the work is an important milestone in the development of a system whereby such leaf sensors can send detailed information to farm managers and support a smart irrigation system that not only improves crop health but also reduces water wastage. they hope to develop the system such that it is powered wireless via solar cells and managed via a smartphone app.