We have been working with TI CC3200 a lot over the past months to make sure that it is fully compatible with our IoT platform Smart.js. We came up against some issues around the file system implementation and wanted to share how we solved this.

TI does include file system support in its SimpleLink SDK: there’s sl_FsOpen,sl_FsRead, sl_FsWrite, and sl_FsDel. In fact, this file system (which we, for lack of a better name, will call TIFS) is the only way to access SPI Flash in CC3200, as it is connected to an SPI interface behind the integrated Network Processor.

TIFS works for very basic file access and actually provides something unique: transparent file encryption and redundant files (at the expense of 2x space usage). This is a really nice to have, however, it has two crucial shortcomings.

Firstly, TIFS doesn’t allow you to list your files. So you can create, write and read them by specific names, but you cannot see all files and select the one you need. Needless to say, there aren’t such things as directories, but even listing files in the one and only directory is not supported at all.

The second issue is around having to predeclare the size of the file. TIFS pre-allocates space and the file size is limited by the size declared at the time the file is created. This means you may not be able to write to a file if it ends up larger than you expected (even if the file system as a whole has space available) or, if it ends up smaller, the reserved space will be wasted.

In Smart.js, we aim to support a POSIX compatible file API. Unfortunately, TIFS does not map well onto that. Especially the lack of file listing was deemed critical, so here is what we did next.

We examined suitable full feature file systems that would work on Flash. One of them is the SPI Flash File System (SPIFFS). This system is designed for raw Flash access and we use it on other platforms where no file system interface is provided by the SDK.

This is where we came up against the hurdle that TI doesn’t provide access to raw Flash. The only way to access Flash storage is through the TI file system. At this point a shout-out to the TI forum engineers who always provide answers to our queries! Unfortunately, in his response, a TI engineer confirmed that there is no way to access the SPI flash directly.

In light of this, we decided to try to implement SPIFFS in a TIFS file container. This way, a single large TIFS file would contain a whole SPIFFS file system and we’d have POSIX API mapped to SPIFFS file functions. This is how it would look like: 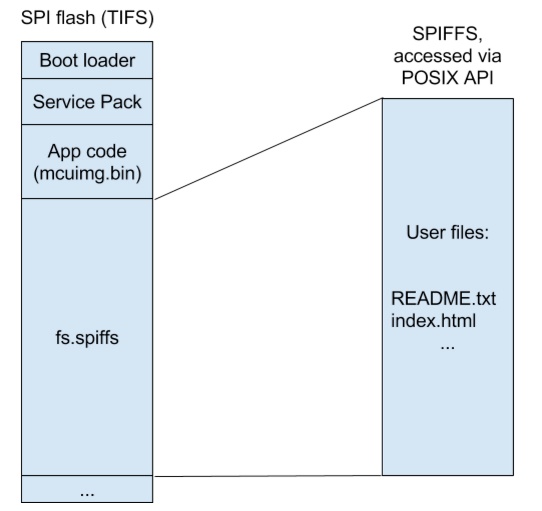 For SPIFFS to work, one needs to implement its block storage access API, which consists of just 3 functions: read block, write block and erase block (reset to all 1’s, the NOR Flash logic). We decided to look closer at the semantics of TIFS and it turned out, that, crucially, TIFS allows random write access to regions of a file and that the regions that were not written before read as all 1’s. Repeated writes to previously written regions can only reset bits to 0. In other words, the semantics are that of the underlying NOR flash (which may be confusing to the end users of TIFS who are not aware of the Flash behavior). This suits SPIFFS well, as it is designed for this exact purpose. There is a major downside, however: it is impossible to reopen a file for writing without erasing the contents (in terms of POSIX open modes, it’s not possible to open for “r+”, only “w”). This presents a major inconvenience, and one that, we think, could be addressed with a very simple change on the TI side, but they said no. There is also no explicit erase function, so it’s not possible to reset regions of a file to all 1’s.

Not being able to re-open an existing container for writing will have significant performance implications for writing files, but it did not completely discourage us. Assuming mostly-read access pattern, but still supporting writes (albeit at a heavy cost), we can still make it work.

The idea is to employ two container files, only one which of which is active at a time (this obviously also doubles the space requirements). Read-only access is possible from the start and no performance penalty, but whenever a mutation is requested (user write or SPIFFS block erase), a container switch operation is performed.

A container switch operation is basically a file copy operation that may optionally skip a specific region, thereby leaving it in all 1’s state.

There are two cases when we need to perform container switch:

There are a number of issues associated with the multi-container setup and the switch operation.

Firstly, on boot, we must be able to identify which container of the two, is the most recent one. This is because after container switch they contain mostly identical copies of the filesystem.

Secondly, we must make sure that an interrupted container copy operation (e.g. due to power failure) does not result in data loss or corrupted file system.

We address both of these by keeping a short metadata structure at the end of the container file. In this structure, in addition to SPIFFS creation parameters (page and block size), we also record a sequencer. Sequencer is a 64-bit number that starts at “all 1’s minus 1” (0xFFFFFFFFFFFFFFFE) and counts down. On every container switch, we decrement the sequencer, and the file system container with the lowest sequencer is considered more recent. When performing a container switch, we write updated metadata last, and because the empty container starts as all 1’s and we count our sequencers down rather than up, an interrupted container switch (which has not written metadata yet) will result in an image with the highest sequencer value (and thus lowest priority), even higher than the initial one for a valid image (which is one lower). There are no provisions made for sequencer wraparound, as even if a program is doing nothing other than writing, that will occur if not after, then not shortly before the heat death of the Universe. The chip will certainly wear out sooner.

After all that, the final picture will look something like this: 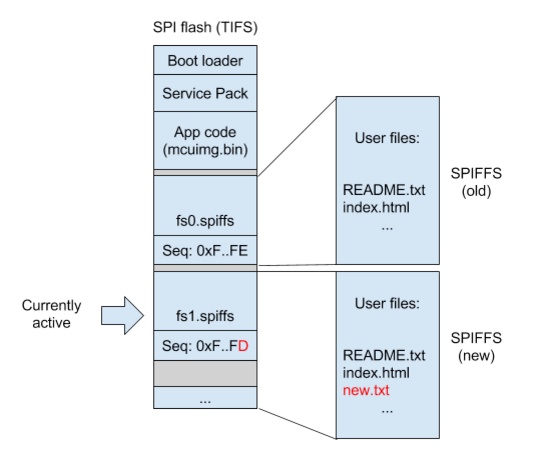 So the end result is a full feature POSIX file system on TI CC3200 and it’s all used in Smart. js.

Since Smart.js is open source, you can find all the source implementing this on GitHub, under the CC3200 platform directory (look for cc3200_fs_* files).

There is a possibility of using smaller container files to store parts of the SPIFFS image. This will help alleviate the performance impact of container switch on larger filesystem images. It’s at idea stage at the moment. We’ll let you know when it comes to implementation.