The Golden Age of malware was in the '80's and '90's — believe it or not. That's when we were first playing around with things like viruses and worms, computer systems were much simpler, and cybersecurity just didn't exist. And, for the most part, malware research was for fun, not for profit or for country. And, the hysteria of the mid-90's hadn't really hit yet (even though the writing was on the wall).

I enjoy going back and looking at some of these old viruses and looking over classics, like Mark Ludwig's Black Book series or Ralf Burger's Computer Viruses: A High-Tech Disease.

And, you can actually still code these viruses up with good old VMWare, if you can find old DOS images on the Internet. I'd like to show you these old versions of malware. But first, we need to install an old computer system.

Now, I will run the VMWare Fusion, but I expect this will work with any version of VMWare and, most likely, VirtualBox, too. Let's get started.

First, create a new VM. On Fusion, you must select a custom VM and then specify that you'll run Windows 3.1. Now, you have a VM, but you have no image on it, and it won't boot. No problem, we can fix this!

Next, take the version of DOS that you're using and place the files in a directory. It doesn't matter where the directory is as long as you can read and write from and to it. Next, add a device — on Fusion, select the "Hard Disk (IDE)" option on the settings menu for the VM, and then select the "Add Device..." option from the upper right. Look! You have the ability to add a floppy disk! Go ahead and add it and select the appropriate IMG file for the disk (usually disk1.img, or something similar).

Great, now, go to "Startup Disk" from the settings menu and choose the "Floppy" option. From here, you can restart the VM, and you're running DOS!

Now that you have DOS up, you can use FDISK to create another DOS partition in your VM, and then, you can XCOPY your files to that partition. Next, you can set your VM to startup from the new hard disk, and you have a DOS workstation running with an integrated hard disk. 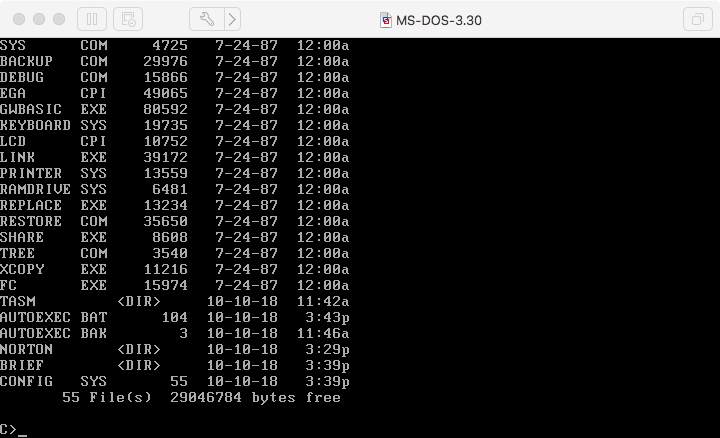 You can use the same technique to load new IMG files as floppies to install any software that you need. Now that you have your own 30-year-old virtual environment, you too can start playing with old malware! And, if you stick around, I'll show you how. Stay tuned!