Hello! To help celebrate the Windows 8 Release Preview and the Visual Studio 2012 Release Candidate, we’re happy to release a preview edition of Programming Windows 8 Apps with HTML, CSS, and JavaScript, by Kraig Brockschmidt (who, some of you might remember, many years ago worked with us on a couple editions of Inside OLE).

This first preview contains the first four chapters of what we think will be an 18-chapter final ebook: 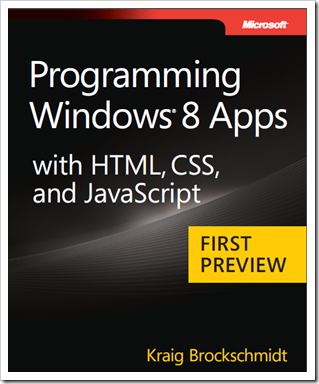 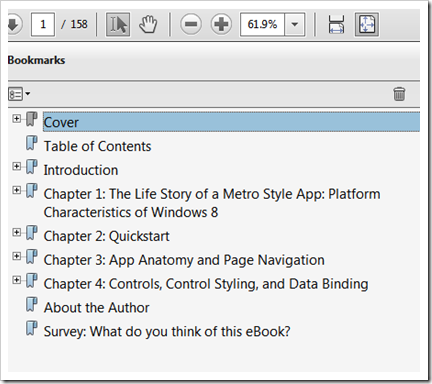 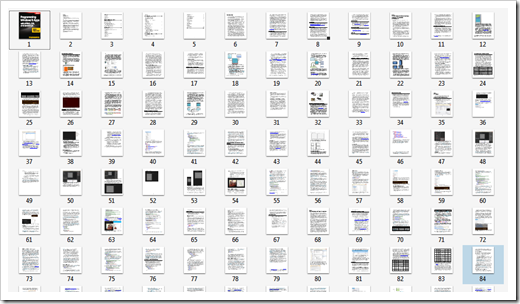 Who This Book Is For
This book is about writing Metro style apps for Windows 8 using HTML5, CSS3, and JavaScript. Our primary focus will be on applying these web technologies within the Windows 8 platform, where there are unique considerations, and not on exploring the details of those web technologies themselves. For the most part, then, I'm assuming that you're already at least somewhat conversant with these standards. We will cover some of the more salient areas like the CSS grid, which is central to app layout, but otherwise I trust that you're capable of finding appropriate references for everything else.

I'm also assuming that your interest in Windows 8 has at least two basic motivations. One, you probably want to come up to speed as quickly as you can, perhaps to carve out a foothold in the Windows Store sooner rather than later. Toward that end, I've front-loaded the early chapters with the most important aspects of app development along with "Quickstart" sections to give you immediate experience with the tools, the API, and core platform features. On the other hand, you probably also want to make the best app you can, one that performs really well and that takes advantage of the full extent of the platform. Toward this end, I've also endeavored to make this book comprehensive, helping you at least be aware of what's possible and where optimizations can be made.

Many insights have come from working directly with real-world developers on their real-world apps. As part of the Windows Ecosystem team, myself and my teammates have been on the front lines bringing those first apps to the Windows Store. This has involved writing bits of code for those apps and investigating bugs, along with conducting design, code, and performance reviews with members of the core Windows engineering teams. As such, one of my goals with this book is to make that deep understanding available to many more developers, including you!

This is just the start of this wave and given the change that is Windows 8, this is going to be a big one...