For a university research project, I need a fast microcontroller with lots of RAM and FLASH memory. I have ordered a TWR-KV58F220M board from NXP which arrived yesterday. The special thing is that it has on of these new ARM Cortex-M7F on it:

The Tower board box comes with USB cables and a quick start guide, so everything to start with. The features of the KV58F1M0VLQ22 on the board are rather impressive: 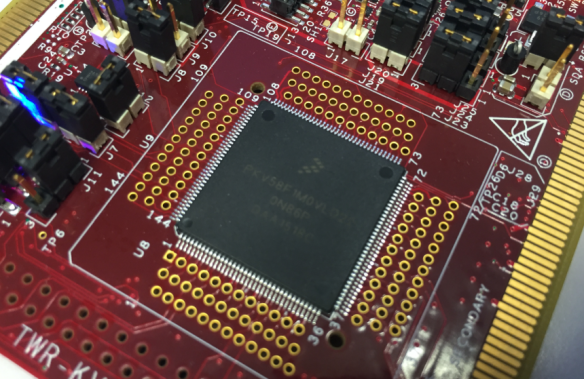 The microcontroller seems to be ideal for motor control, but the performance and features makes it attractive for other high performance applications. Compared to the very affordable price of NXP FRDM boards, the price of this Tower board is very high: US$ 159.00.

The board has four user buttons, four single-color LEDs, a potentiometer plus magnetometer/accelerometer on it. And it has an on-board debugger (OpenSDA V2.1).

The board has an OpenSDA debug circuit (V2.1) on it, similar to the FRDM-K22F, so I can use either P&E or Segger debug firmware on it (I did not use OpenSDA). So I don’t need an external debugging probe.

But if I like, I can use an external debug probe like the Segger J-Link or the P&E Multilink.

If I want to debug the board with an external P&E Multilink or Segger J-Link, I have to *remove* the jumpers J19 and J20: 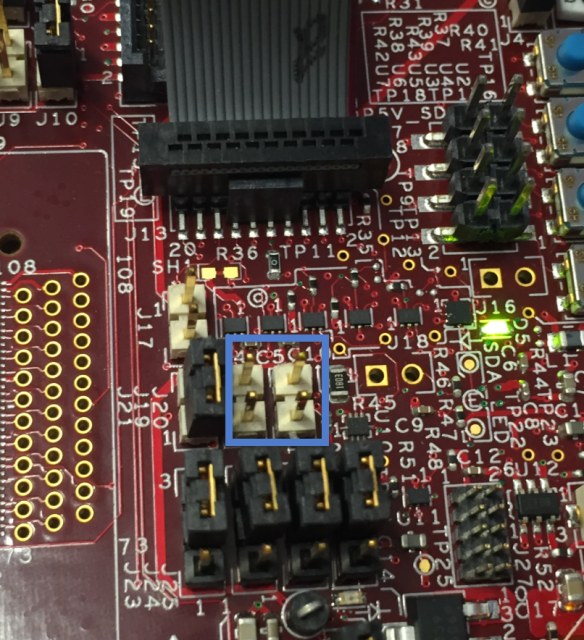 With this, debugging works fine with the P&E Multilink Universal:

The same—it works fine with the Segger J-Link:

So with this, beside of the onboard OpenSDA circuit I can use an external debugging probe with the board.

The target application will run with FreeRTOS, so the first thing I did was running a blinky with FreeRTOS on that board. And because this was the first time using it with an ARM Cortex-M7F CPU, I expected some tweaks and changes, but they were surprisingly minor.

There is a choice in the McuOnEclipse Processor Expert component to support Cortex-M7/M7F:

With this, the FreeRTOS port knows that it has to run on an ARM Cortex-M7 or M7F. I had to tweak a few things in the RTOS port, basically using most of the M4 code for the M7(F) port. So this was surprisingly simple.

In FreeRTOSConfig.h there is a configuration line item which identifies the core:

I’m using the NXP Kinetis Design Studio V3.2.0 with this board. Because the KV58 is a new device, support for the KV58 needs to be added to the IDE. The usual way is to build the SDK for it on http://kex.nxp.com/ (see “First NXP Kinetis SDK Release: SDK V2.0 with Online On-Demand Package Builder“):

As shown above, only the SDK 1.3 is supported (no SDK 2.0 as of today). Which is unfortunate, but the same time I get Processor Expert support for it. I installed the package and added the Eclipse update to KDS, and with I can create a new project in Eclipse for it:

The generated empty project worked fine, except that I had to add cmsis_gcc.h to the project from the SDK folder structure: 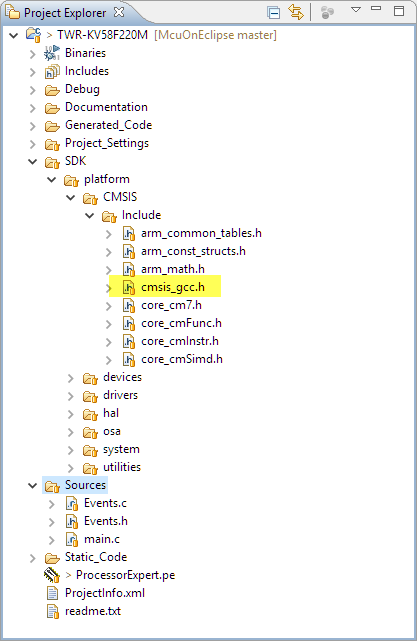 Instead, I used the approach discussed in “Tutorial: Using Processor Expert and FreeRTOS with Kinetis SDK V1.2” and used the McuOnEclipse FreeRTOS:

The default fsl_os_abstraction is set to BareMetal with disabled timer:

FreeRTOS is configured to use the Kinetis SDK:

The Kinetis SDK component is configured to use the V1.3:

As a side effort, I have now enabled the SDK_BitIO component to work with the SDK V1.3 too:

For the SDK V1.2 it is necessary to give the pin a name, while this is not needed for the SDK V2.0:

That makes a simple demo with to blinky tasks really simple:

And here is the blinky running on the board:

FreeRTOS thread awareness with the Segger firmware (see “Adding FreeRTOS Thread Awareness to GDB and Eclipse“) is working too:

I got Segger SystemView working with RTT. The only thing was that the V2.38 was not able to detect the RTT block automatically, so I specified the address of the _SEGGER_RTT symbol in the application manually in the connection settings: 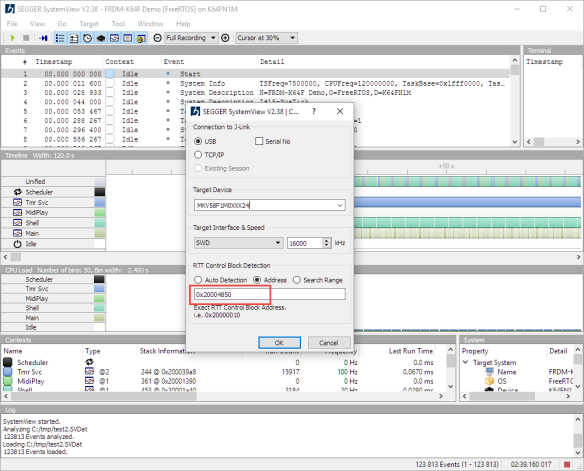 With this, the SystemView is working like a charm:

It was easy to get FreeRTOS running on that new NXP ARM Cortex-M7F. It is a powerful CPU, I only wish there would be an affordable FRDM board for it. For an evaluation, the board provides all the things I need, plus direct access to the CPU pins on the board. Further benchmarks will show if that microcontroller can be used in that project, we will see. But it is a good start to have the software up and running within hours including FreeRTOS.

I have put the project discussed on GitHub.

The updated Processor Expert components to support Cortex-M7 will be available in the next release, probably in a next post.