Growth hacking is a funny thing. The way people talk about it, you'd swear it's something that just happened. Sure, the term was only coined a few years back, but companies have been doing it for years. Although it can be defined in many ways, I like to go with the following:

Growth hacking is any combination of coding and marketing skills, with a little dash of data analysis, to help growth traction for your product.

Pretty simple right? It's all about getting your acquisition levels up, and keeping user retention high. Let's take a look at some of the classic growth hacks that highlight some innovative ways, in their time, to gain traction.

Way back on Independence Day 1996, Hotmail was launched. Although we've seen so much of this type of service now, back then, this was a huge deal. 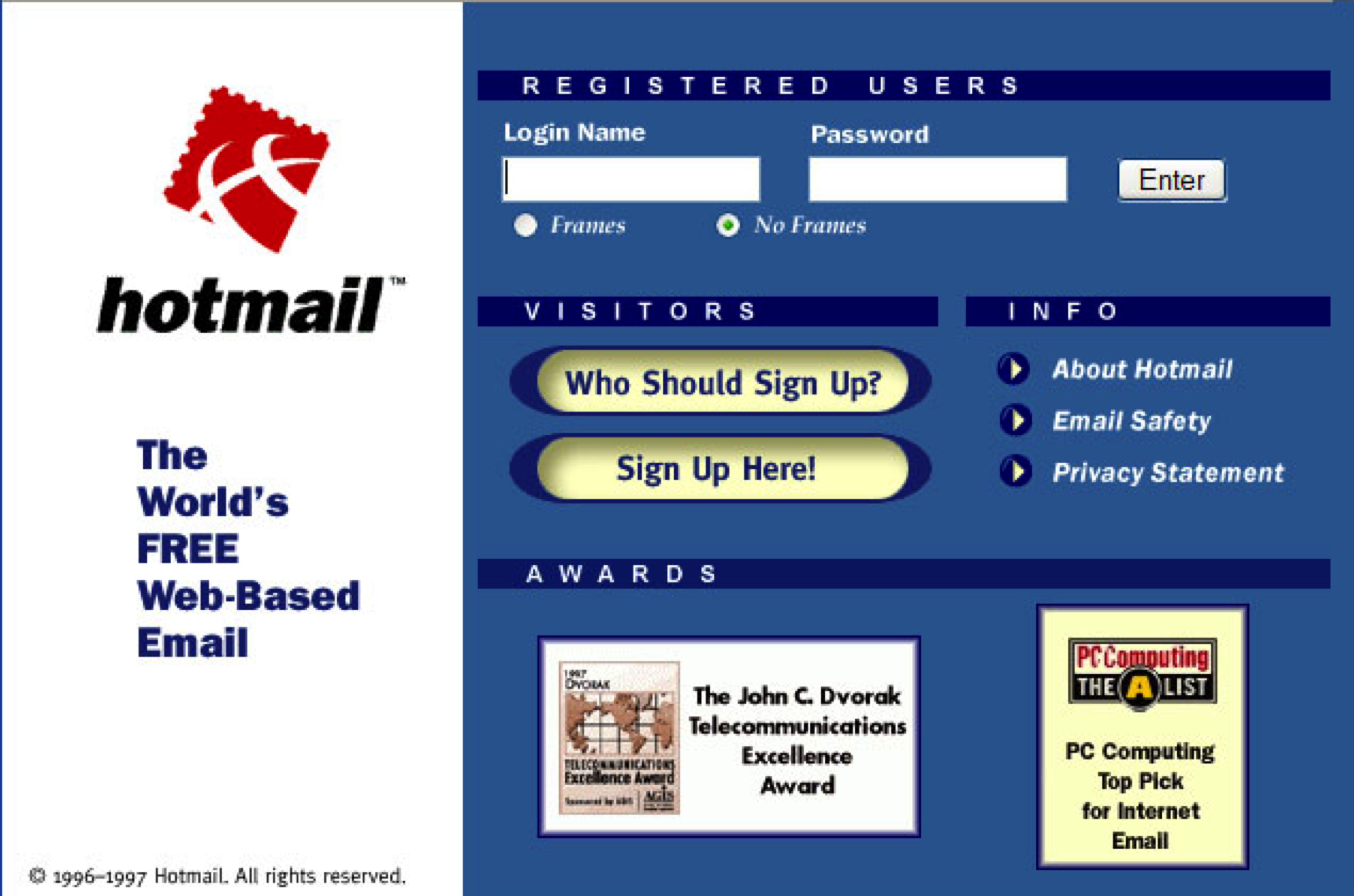 They started out with fairly modest traction of a few hundred users a day. A few weeks after launch the venture capitalists behind the project were getting a little impatient, knowing that the product deserved better traction. So they suggested that a signature was added to the end of each email, encouraging the receiver to get their own hotmail account. It looked a little like this 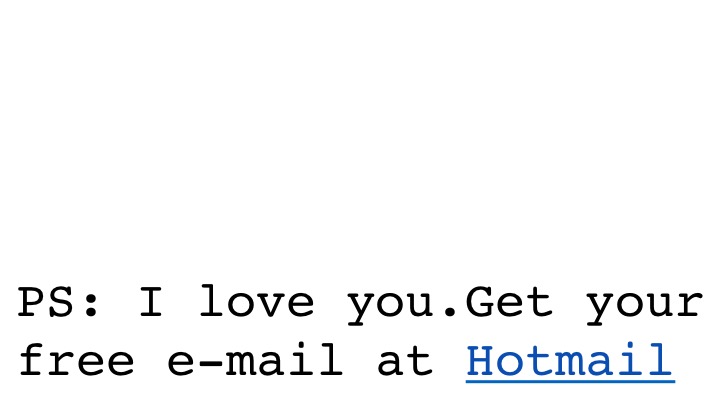 What happened next is the stuff of legend. The growth curve was exponential, now averaging about 3,000 users per day. By Labor Day the service had 750,000 users, and within six months Hotmail hit 1 million users; six weeks later that number hit 2 million. At the stage that the company sold for $400 million to Microsoft in November 1997, they had 10 million users. This was at a time that the internet had only about 70 million users.

These days you still see variations of this acquisition strategy, such as the default email signature for your iPhone

When Airbnb was starting out, it wasn't the powerhouse that it is today. At the time, Craigslist was still the most visited site for short term room and house rentals. Being completely aware of this fact, the engineers at Airbnb created a simple system where users who posted on their site were encouraged to re-post a link to the listing on Airbnb.

This created huge awareness of Airbnb. The impressive thing from a developer point of view is that this was at a time when there weren't any APIs open for integration to Craigslist (the loophole eventually got shut down).

Airbnb went one step further though, and contacted people who left listings on Craigslist, encouraging them to post it on Airbnb. 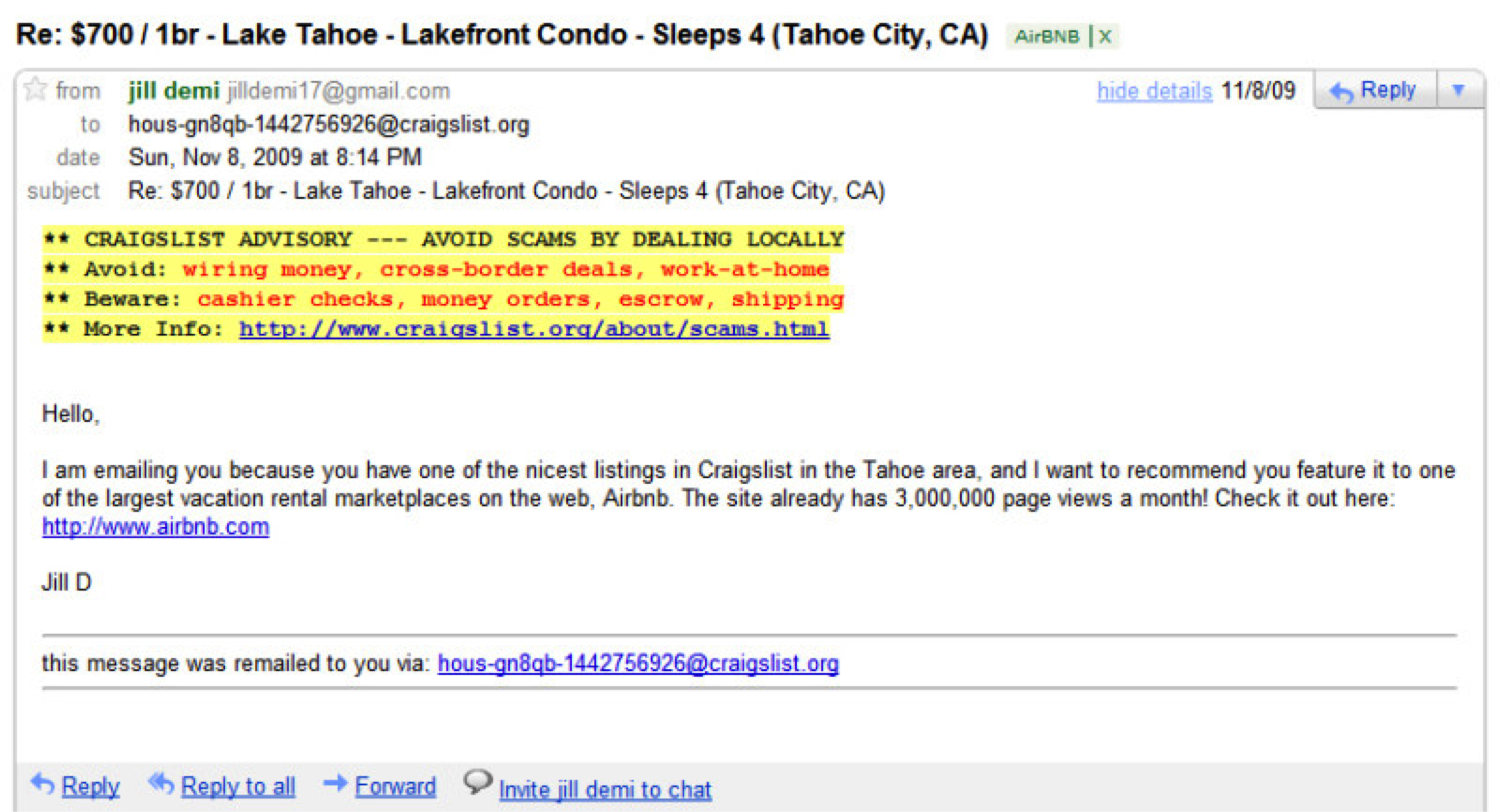 By thinking a little differently about the problem, and with awareness of what potential customers were using, Airbnb found one of the best acquisition modes ever.

I'm sure if you asked anyone why they love Dropbox, they would cite the fact that you can get a lot of space on their system at no cost. They've probably forgotten how they got all that free space—by referring it to their friends and family.

Dropbox has this really powerful strategy that, by inviting your contacts to use Dropbox, you will earn some more space for yourself.... up to 16GB of it! 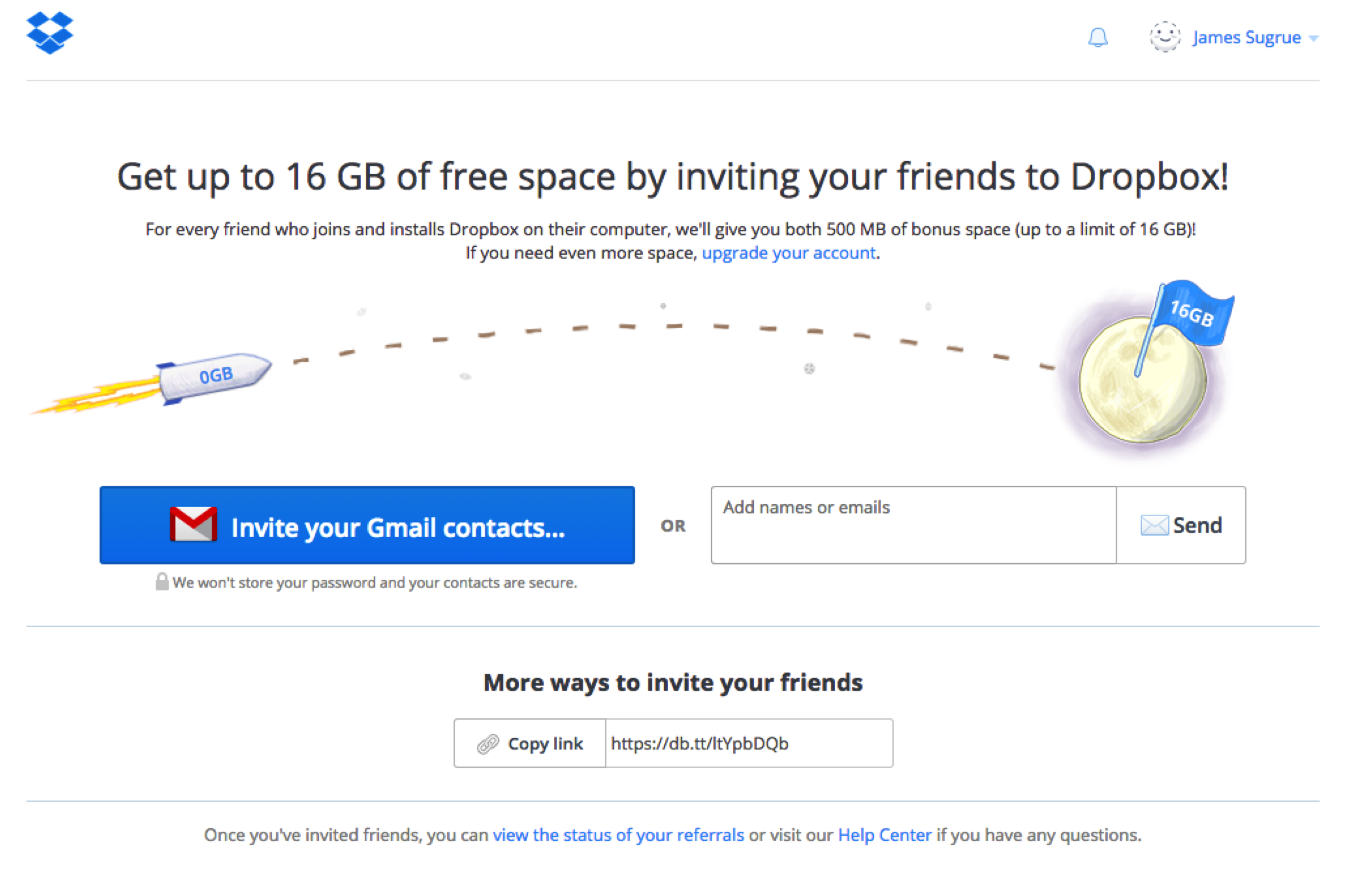 Compare this to when Dropbox was starting out with paid advertising. The team found that the amount they spent on this advertising negated the lifetime value of the customer; a surefire way to burn through any money they had.

Another great technique was the Dropbox Space Race, which is a competition between universities worldwide to see which university could win. The students and staff at the institution would gain from the amount of free space, and the prestige of being top of the leaderboard. The genius of this program was that the students would use Dropbox by default when they went out into industry, thus increasing the amount of enterprises who subscribed to the service.

#4 Twitter Learns From Its Users to Increase User Retention

For a long time Twitter was having a retention problem. Users would sign up, but would not remain engaged with the service. They sent out no tweets, didn't revisit the site... they had effectively lost interest.

Instead of depending on advertising campaigns or email shots, the team looked at their current user set. By analysing their active users, they found that once someone followed between 5 and 10 other accounts, they were more likely to engage.

To get this to happen, they tweaked the signup process so that once you had chosen your username and put in some basic details, you were presented with popular accounts to follow. These days this is amped up by magically delving into your real life social network and picking out friends or people you may have contacted that you should follow. 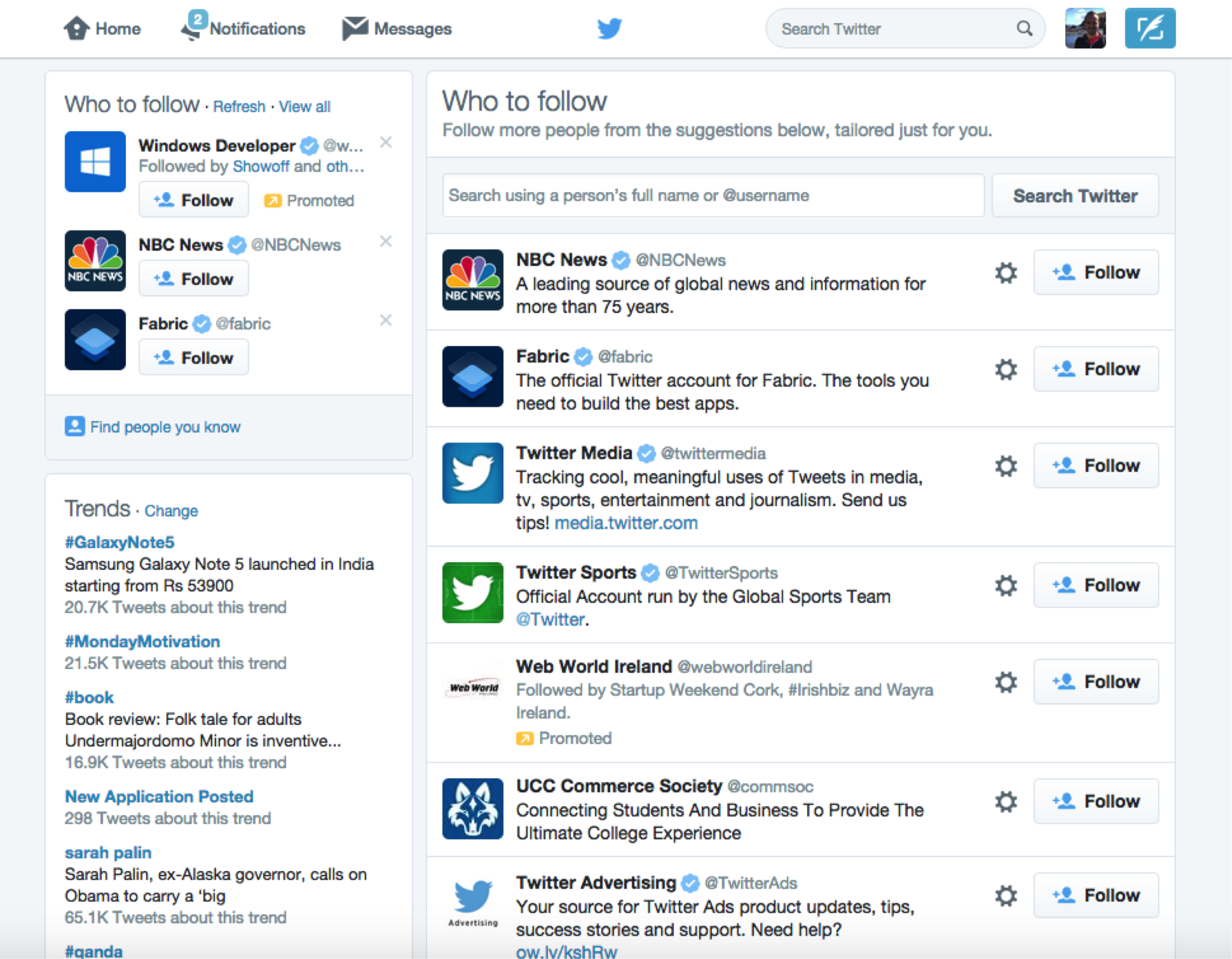 The final example is Mailbox, an app that provided a new way for dealing with your email. Straight away it made itself a product that people would want by solving a common problem—a tidy inbox. However, if you downloaded the app, you were simply added to a queue of people waiting for the full functionality.

The strange thing is that people were so proud of their position, that they would share it on their social networks. Nothing attracts a crowd like a crowd, and soon there were hundreds of thousands on the waiting list.

These days a lot of new services use a similar technique, although the act of sharing and having people sign up through the link you share will often move you further up the queue. 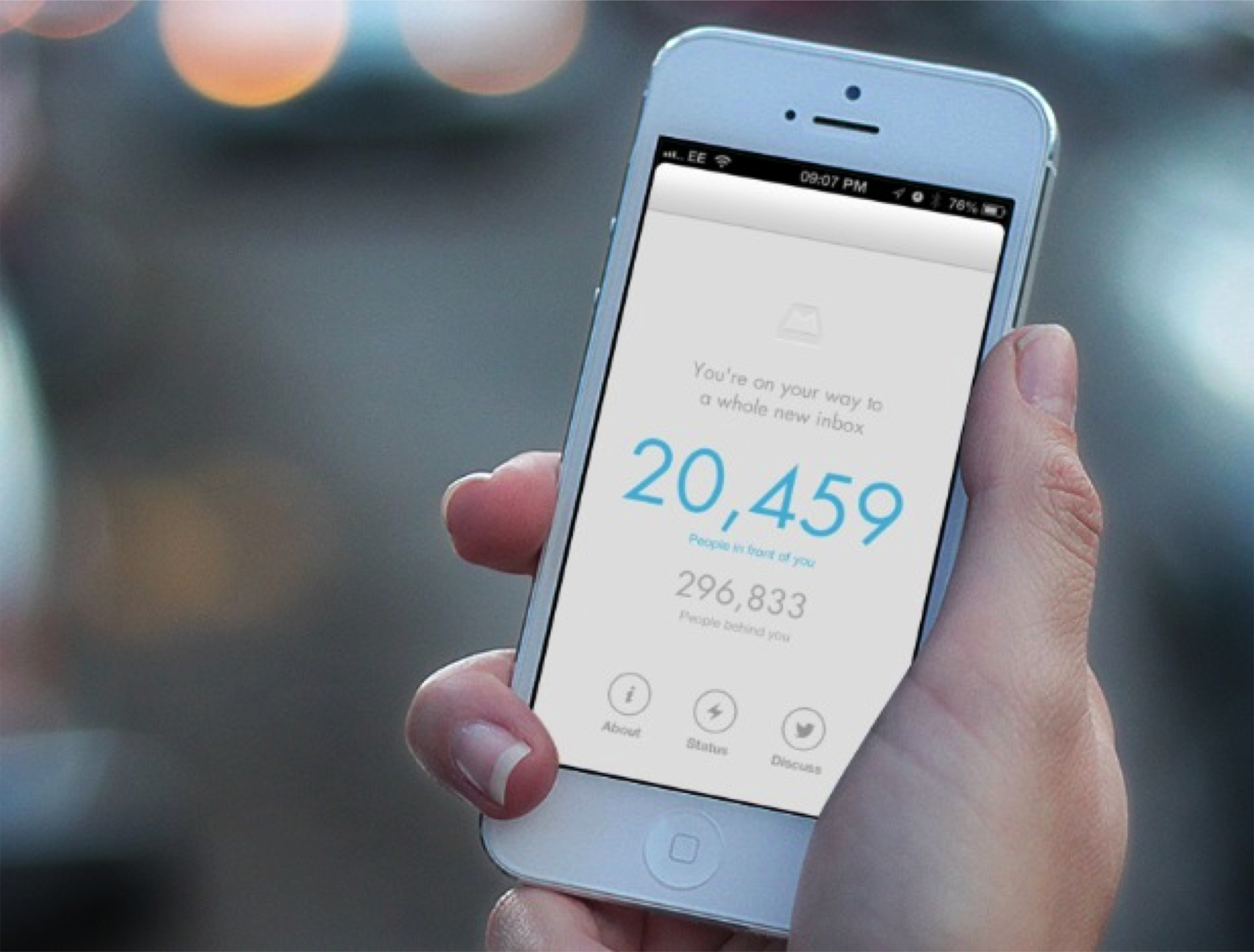 These are just five of the most famous growth hacks that have lead to huge growth for companies. As customers become more aware of copycats using the same techniques, it gets more difficult to think of new ways to engage with customers. But that's the fun of growth hacking!