TechEmpower Framework Benchmark (TFB) is a web application frameworks comparison platform. It is now the de facto reference point when anyone talks about web framework performance. In this post I will talk about some facts that you might not notice about TFB.

1. The Completeness of TFB

There over 1800 tests of 464 frameworks in 26 different languages running on TFB, and the numbers keep growing. You can literally find most frameworks in many languages in this platform. If you don't, that's fine; you can either open an issue or make your contribution and submit a PR to team

2. The Community and Project Activity

The community is very active, the team is now closing in on their 3,000th PR, and the number of commits has already exceeded 10,000. Thanks to the TechEmpower team for their diligence and awesome work to make this happening!

3. You Don't Need to Compare Apples With Oranges

At first glance, when you landed on TFB website, it might have confused you to see that this benchmark is apparently comparing apples to oranges. You see a long list of throughputs comparison of all frameworks in all different languages, and you see the performance of MySQL, Postgresql, and MongoDB in the same page. Some tests use raw database connection, others might use a full ORM layer, and it doesn't really look right. However, TFB is a platform designed to host all these varieties. The same thing happens to a farm in which apples and oranges can be planted. As you don't necessarily compare apple with orange, you don't have to compare the performance of different types of system. All you want to do is to open the "Show Filter Panel" button: 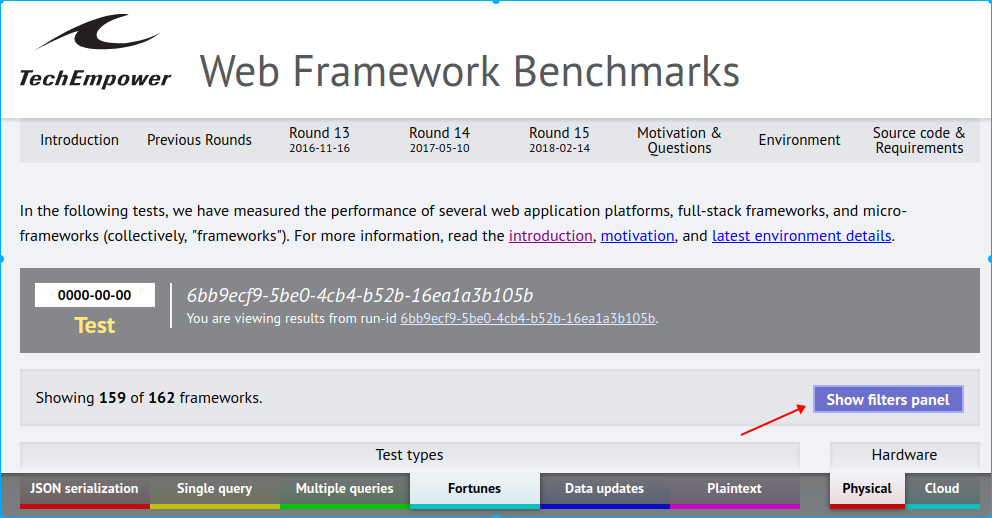 Then you get a filter panel allows you to turn on/off options of multiple dimensions including the Classficiation, Language, Database, ORM type etc: 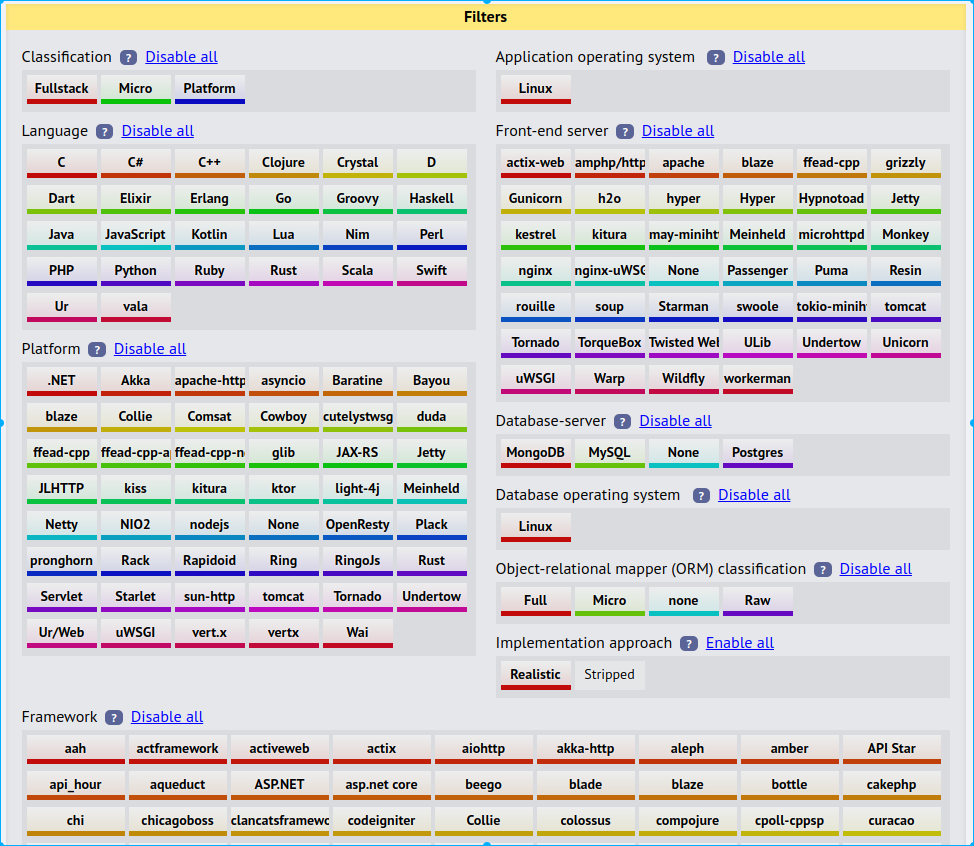 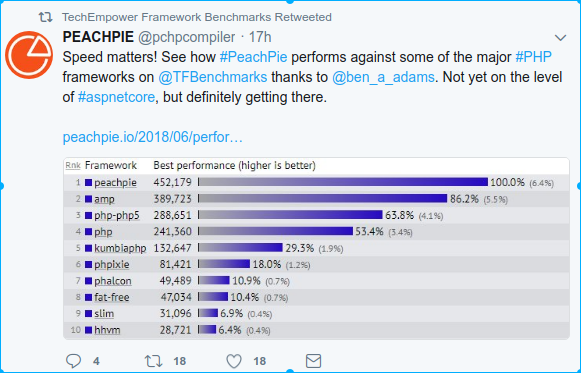 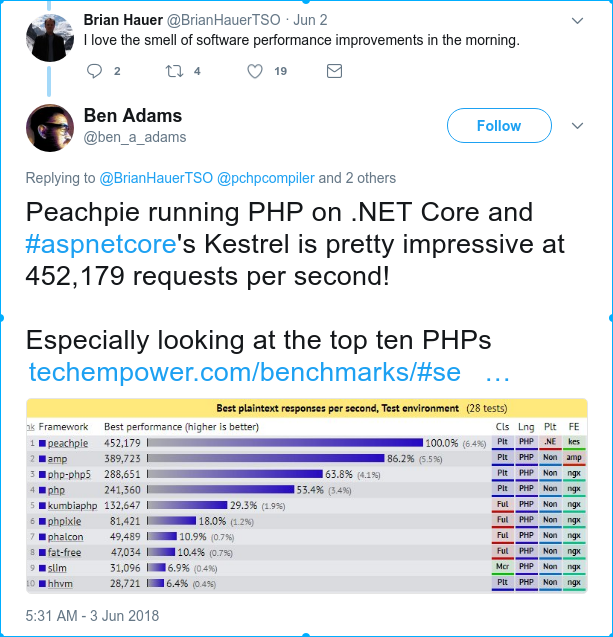 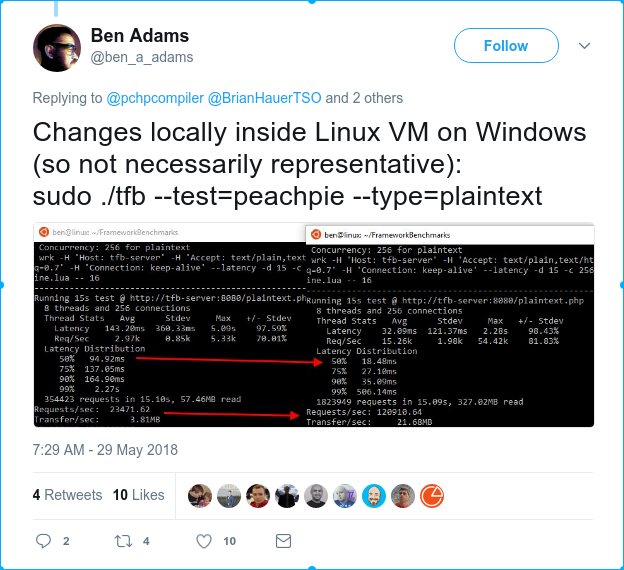 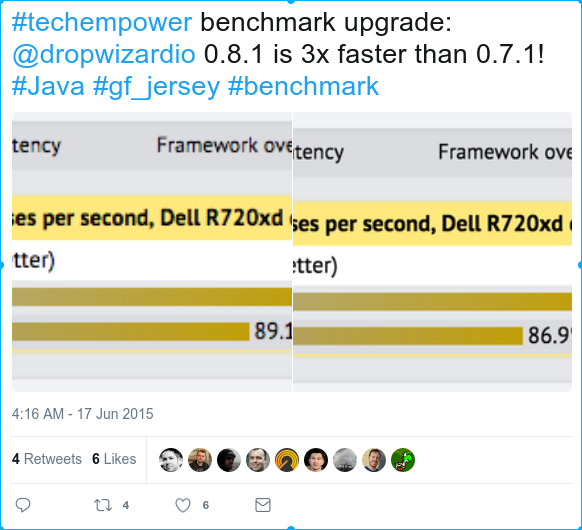 TechEmpower has implemented a fully automated process, running TFB continuously with each framework testing instance inside a separate Docker container. The TFB status shows the current and historical report of each test rounds — including both published and internal rounds. Doing this really benefits framework developers because they can now get quick feedback (in about 70 hours instead of months) when they have a new version with the performance tuning fixes in their product.

TechEmpower Framework Benchmark as a web framework benchmark platform creates great value for both application developer and framework developer. It makes a significant contribution to the industry in terms of facilitating the development of faster framework and application.