Join For Free
Next Tuesday (June 8th) there will be an interactive webinar on Xtext at Eclipse Live. Here are the best 5 reasons for you to show up:
Reason I : You want to learn how easy Domain-Specific Language (DSL) development can be
People state that developing external DSLs is much more complicated than internal DSLs. With Xtext the opposite is the case. Xtext itself provides a concise language to describe DSLs, so that it takes only minutes to create a first draft of your language. You don't have to deal with complex meta programming or multiple syntax alternatives as you do in internal DSL development. With Xtext your language definition is concise and declarative and you get language specific IDE support.
Reason II: You want to see the new Helios features in action

In the Helios release Xtext graduated to version 1.0. It has grown up from a tiny little editor generator to a mature language development framework. Still simple things are simple, but you now get much more out of the box. Features like namespace-based scoping, a workspace index, a builder infrastructure, validation and linking against dirty editor state, quick fixes, linking to any Java elements and tight integration with JDT, enhanced serialization and formatting support and much more.
Reason III: You'ld like to see how "Modeling 2.0" looks like 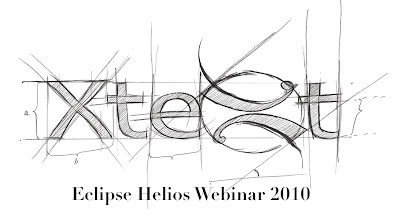 The days of heavy weight, dogmatic modeling approaches are over. In 2010 Modeling technology is mature and a pragmatic solution to many problems. Xtext and EMF are a dream team! Models are now also code and integrate seamless with common development environments such as version control.

Reason IV: You need a decent IDE for a particular programming language

It's astounding how many programming languages are used in the different industries. There are so many languages I'm sure you haven't heard of. Most of them have one thing in common: They lack decent tool support. I'm not talking about syntax coloring for Vim, but something close to what modern Java IDEs offer. We at itemis have already successfully implemented a couple of IDEs for various programming languages. We will show something in the webinar.

Reason V: The webinar is free and interactive

As usual with Eclipse Live webinars, the event is free of charge and the integrated chat application allows us to communicate. The Xtext committers will attend and be happy to answer any questions. Unfortunately Sebastian won't be able to join (for personal reasons). But Jan was so kind to jump in and do the presentation with me. We are looking forward to meet you online!
Have fun.