this is the first in a 3 part blog series i am doing on flash mobile technology. with the release of flash builder 4.5 , flash and flex now have support for building mobile applications that target android and, with an update coming out on 6/20, also iphone and blackberry devices. in my opinion, this is now the best platform for building cross-platform mobile applications available today.

when targeting applications for mobile development you both have different constraints due to screen size and limited cpu/memory, as well as additional opportunities for enhancing your application by taking advantage of features like multitouch, the accelerometer, and the gps. in this blog i chose to focus on multitouch, because it is something that every application should take advantage of.

flash supports 5 different multitouch gestures. the following table describes the gestures and includes a figure demonstrating the multitouch action needed to trigger it.

to discover if the device your application is running on supports gestures and to query the gesture capabilities dynamically, you can call the following static methods on the multitouch class:

flash has two different modes of multitouch recognition that are mutually exclusive. you can either get the raw multitouch events by setting inputmode to touch_point or can recognize gestures by choosing an inputmode of gesture. before using gesture events, you should ensure that the inputmode to gesture input mode like this:

this is also happens to be the default input mode, so if you haven’t explicitly set it to touch_point then you should be fine.

to both demonstrate the use of gestures as well as to test the availability of different gesture events on your device, we will create a simple flex application called gesture check.

the first thing we will do to create the application is to build a declarative xml layout for the ui. for this we are going to use some of the basic layout and ui classes of flex, including the following:
h/vgroup: the hgroup and vgroup classes let you arrange a set of components in a simple vertical or horizontal stacked layout. the components are laid out in order, with the distance between set by the gap property.

using these layouts and controls, we can put together a simple user interface that displays the status of whether a particular multitouch gesture is enabled on the device and whether the user has successfully tested the gesture. the code for the first gesture of “swipe” can be created declaratively as follows:

next, we need to add some actionscript code that will set the checkbox to enabled if the gesture is supported and will tick the tested box once the user successfully performs the gesture. to find the list of supported gestures we will use the supportedgestures variable described earlier, which we can iterate over to mark the checkboxes.

to test for successful gesture actions, we can add event listeners programmatically using the the addeventlistener() function. it takes two parameters, the gesture to listen for, followed by a callback function.
the completed code is shown here:

upon running this example you will see the following: 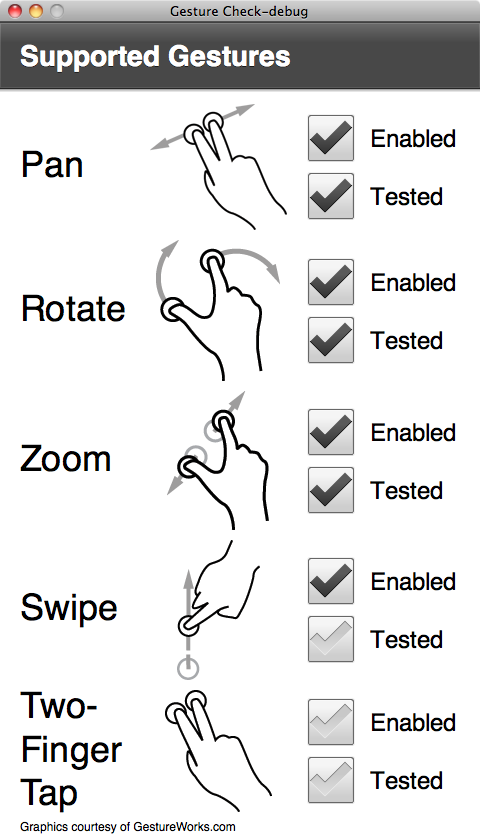 most modern android devices support the full complement of gestures, so you will get back 100% enabled when running on device. however, running in the emulator it will depend on what platform you are running on.

try testing all 5 gestures and see if you can successfully test them on your own device.