This article is inspired by the JUG talk I gave about utilising Java Flight Recorder to profile Kotlin applications deployed into the cloud. It's a very interesting subject that deserves definitely more attention.

The goal of this article is to examine the possibilities of profiling a Kotlin and a similar Java application with JMC/Java Flight Recorder to get a better understanding of their behavior compared to each other. Nowadays the IT world often spells terms like SRE  (Site Reliability Engineering) or latencies, but how to measure this in an accurate way without relying on “random” samples. The exact answer to this question is out of the scope, but we can show what possibilities there are for understanding and measuring the behaviour of an application in regard to these aspects based on simple examples using the JFR.

Starting slowly: what is the JVM? The JVM stands for Java Virtual Machine. The JVM enables a computer to run Java programs, but not just that. JVM supports all languages that are able to be compiled into the Java byte-code. All good so far, but what is the JMC/JFR?

The letters JFR stand for the Java Flight Recorder, which is an event-based toolset build directly into the JVM.

Exciting, isn't it? The JFR can provide a view to the JVM internals through emitted events and more…

The purpose of this article is to compare a Kotlin and a Java app and touch “hidden” compiled code compositions.

Let’s briefly introduce Koltin first as Java has been around for quite a while. I would even bet a couple of million articles have already been written about Java, so it’s fair to have just a short Kotlin introduction.

Kotlin belongs to the JVM language family. It was introduced in 2011 as a new language for JVM and has been developed by JetBrains. The communicated goal was to become a “better language” for the JVM. Kotlin has since been successfully adopted by the Android community and is gaining ground on the backend as well. In short, Kotlin is an object-oriented statistically typed language. It offers a set of quite handy features and traits such as: data classes, concise, safety, smart casting, functional capabilities etc.

Perhaps because of these often spelled Kotlin "benefits",  nowadays more companies are thinking about or are already using a Kotlin stack for backend development. The reason for this may seem obvious,but there are different perspectives for this choice and a discussion about it may turn into chicken-egg arguments. This is also out of the scope of this article.

I have put the word "benefits" in the previous paragraphs between apostrophes intentionally as some nice concepts may look very neat in Kotlin, but they may not be as optimized as Java’s counterpart (considering latest Java builds)! The Java Ecosystem evolves pretty fast and Java stays the 1st JVM language and also the most optimized one. But nonetheless Kotlin has many nice constructs ( an usage of when-smart-casting or type references). Such constructs can help teams move faster without causing unwanted issues. An example of such an issue is the well-known NPE  (Null Pointer Exception).

The introduction is done. Let’s now compare the characteristics of a comparable Java & Kotlin app using the JMC/JFR! First, we share the setup.  For each measurement we use the current development state of the JMC/Java Flight Recorder - Early Access [1].

Each measurement is done in a 45 seconds time window. All examples use OpenJDK 17 [4].

We used the following 2 examples [2] to get some measurable data:

Each example uses similar JMC/JFR Events. Such events wrap equivalent sections of the application (Java/Kotlin) to obtain comparable results. The application Threads are also reduced in both cases in order to -again - obtain comparable results. This means any detailed platform configuration is avoided as the goal is to compare basic platform configuration.

The idea of this simple app is to have two “containers” held by the individual "worker". Those two containers each hold their own collection of numbers. The worker tries to find an intersection of those paired containers (see Img.1. in Kotlin, similar in Java) 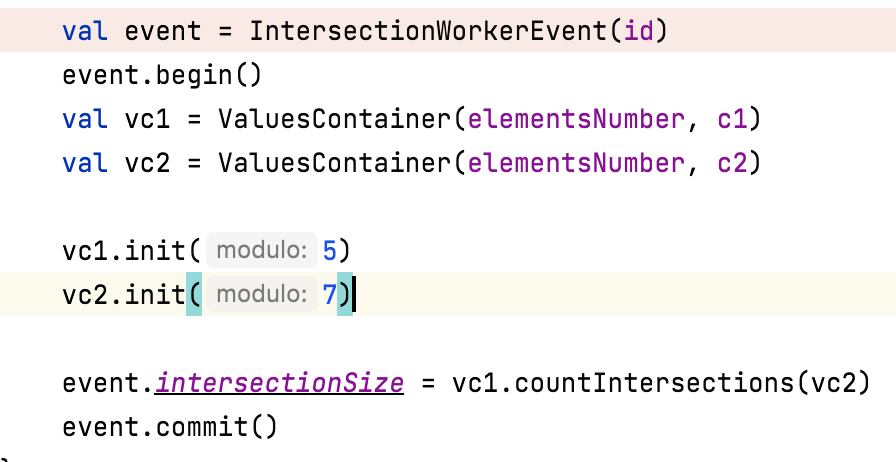 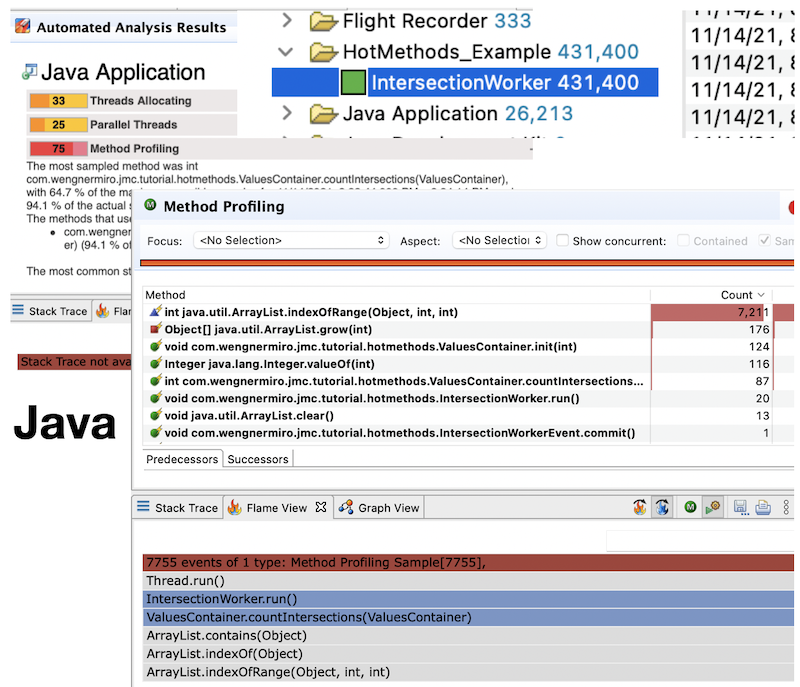 We now repeat this process for the Kotlin version of the similar application for 45 seconds and obtain the following results (see, Img.3.) 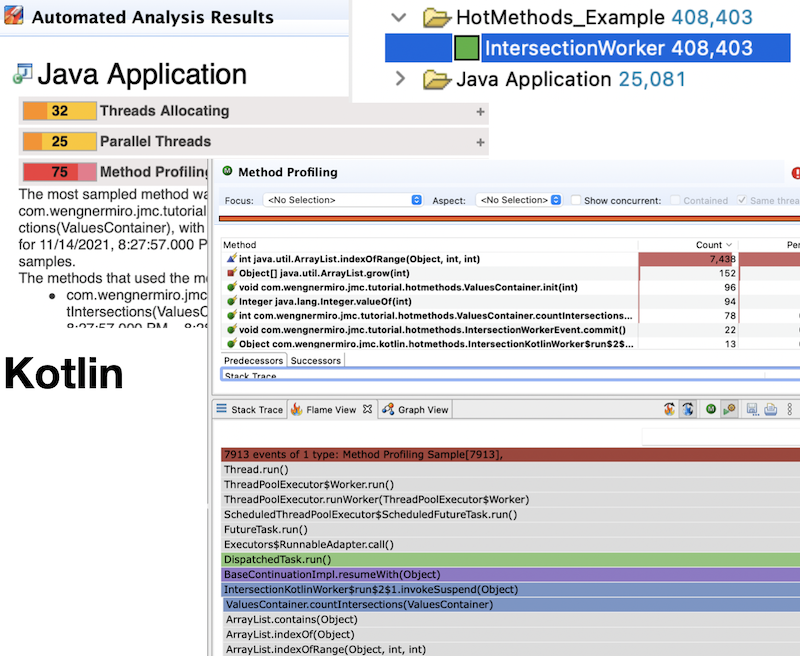 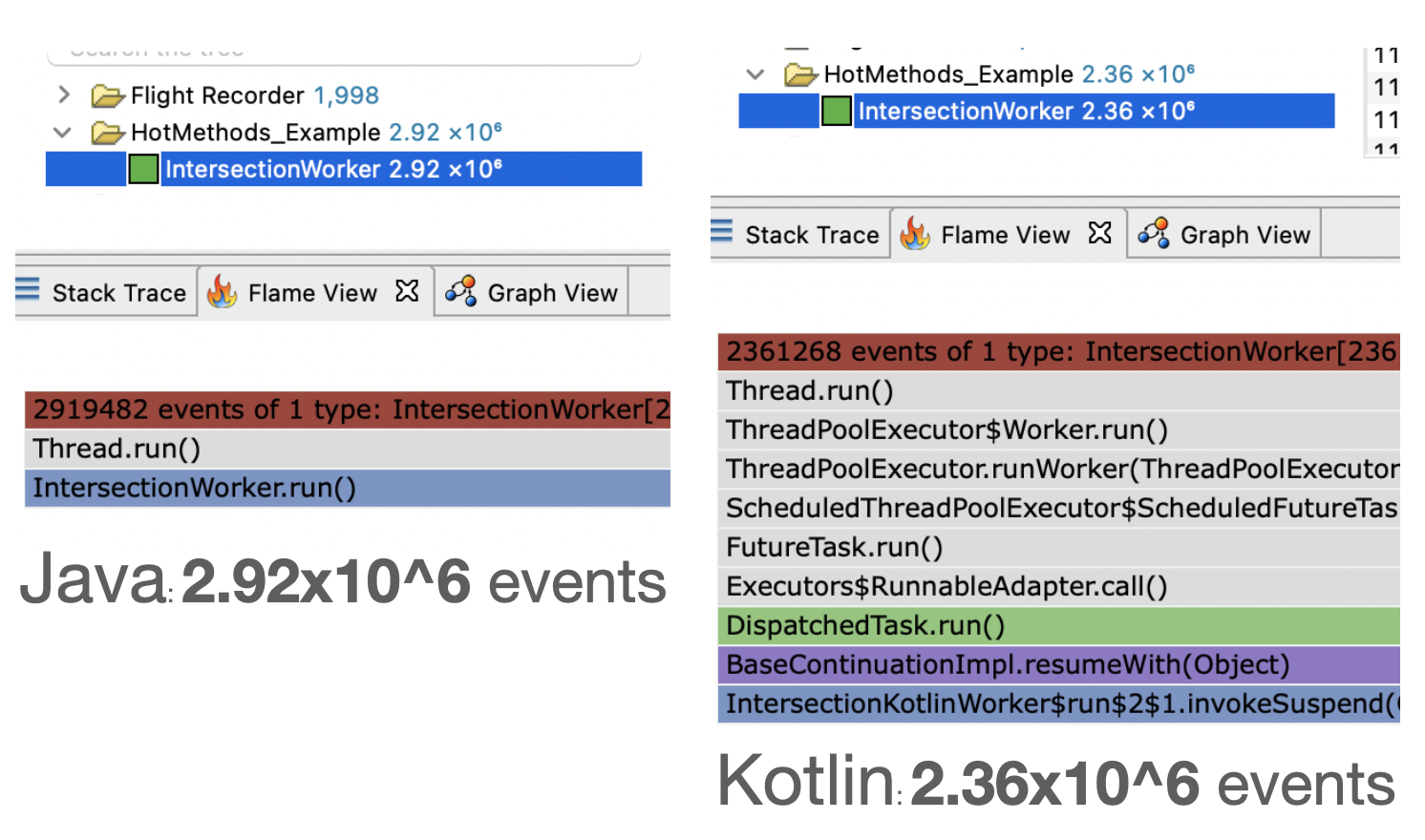 Well, pretty interesting, don’t you think. Before making conclusions, let’s go to the next example.

The second example is based on getting insights into latency that can be caused by many factors. It could be unnecessary garbage collection, network issues, or improper synchronization inside the application. In our current example, we consider a problematic logger (Img.5.) that has a corrupted method "log" that is synchronized. It means it forces each thread to wait for it. 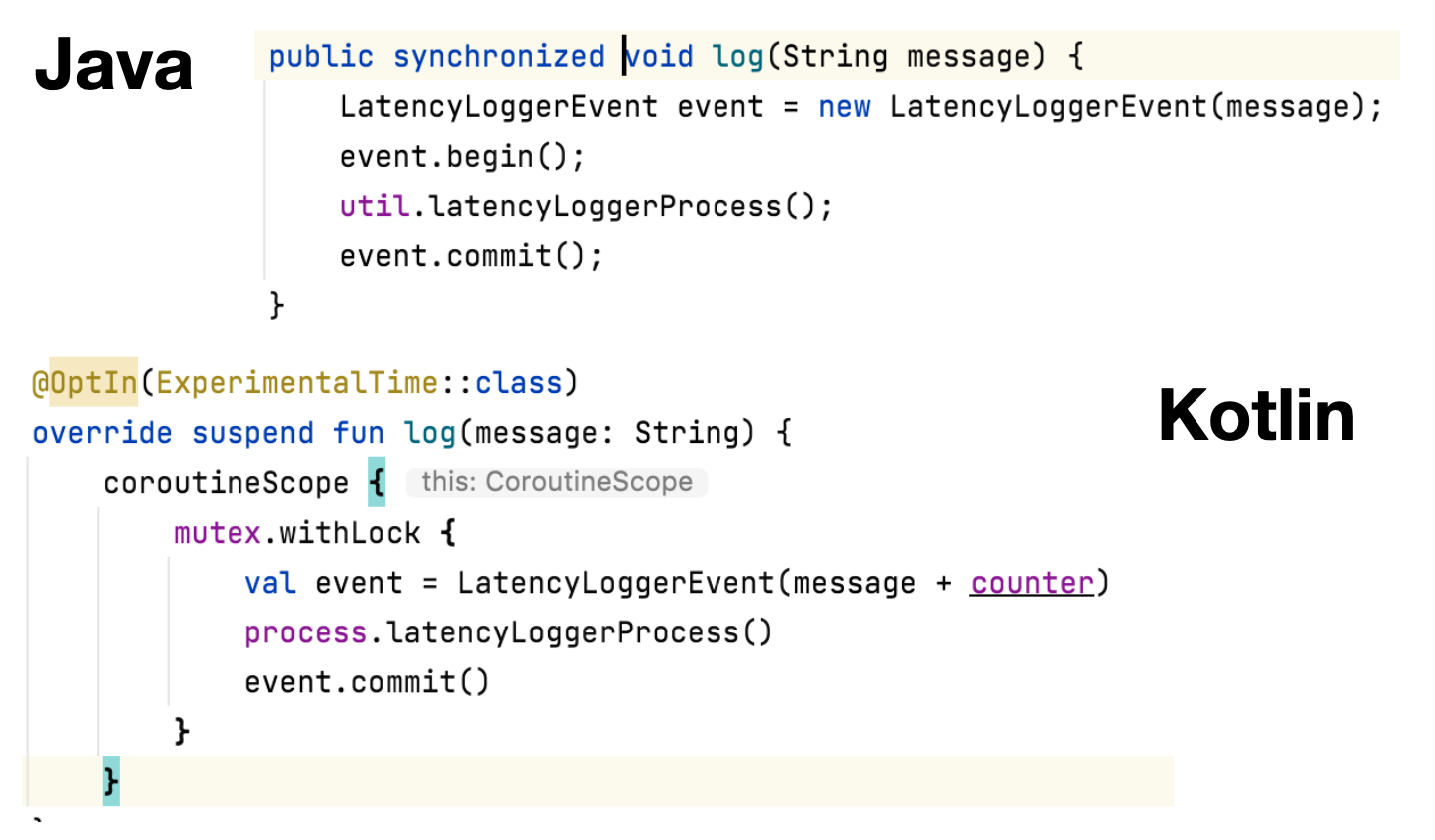 The Kotlin application uses the concept of Mutex (Kotlin Interface, coroutines library)[6] to enforce synchronization. Let's take a look at the measurements. We try to answer the question of how many events can be emitted from the corrupted code in a 45 seconds time window (Img.6.: Java, Img.7.: Kotlin) 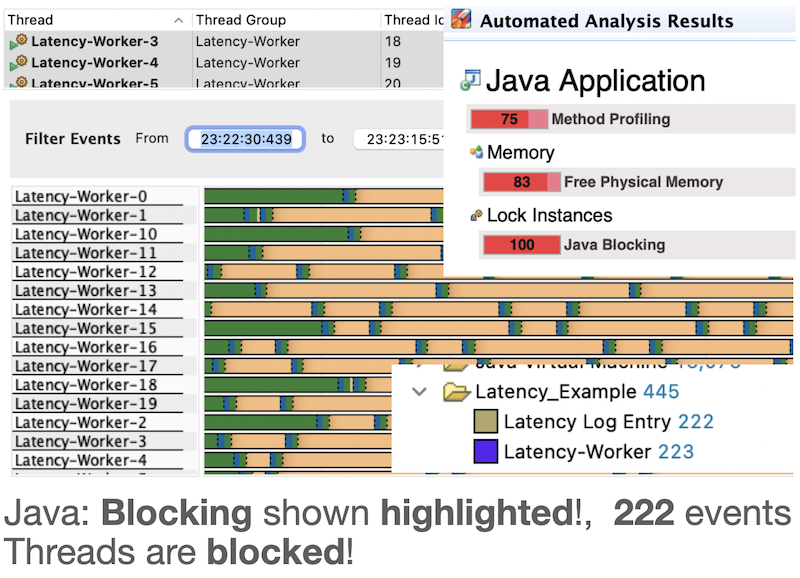 When we run the Kotlin application we receive almost identical results (Img.7.) 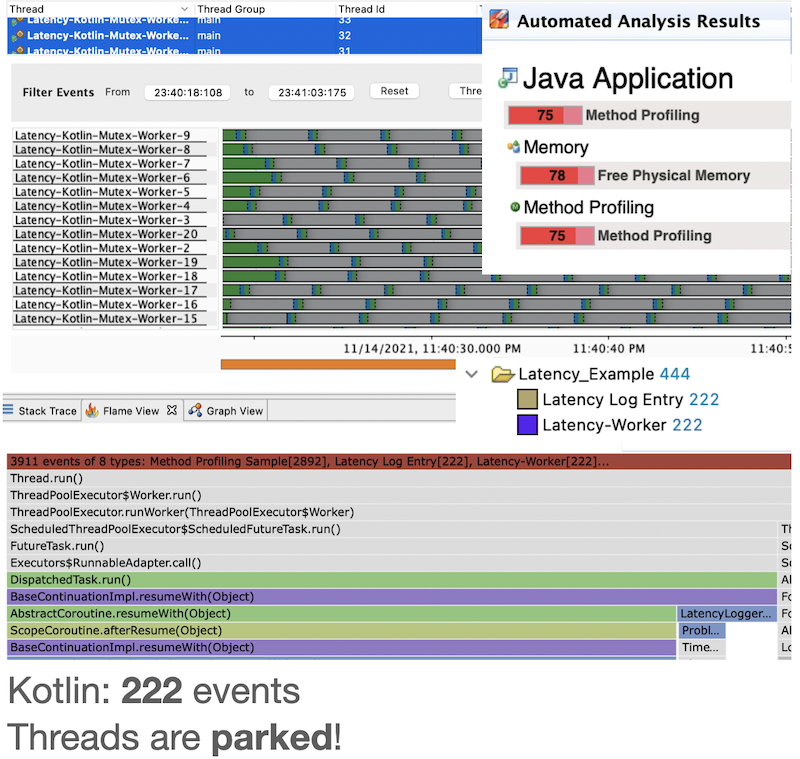 After fixing the problematic logger we obtain the following results (Img.8.: Java, Img.9.: Kotlin). The results show that the blocking issue has been removed. 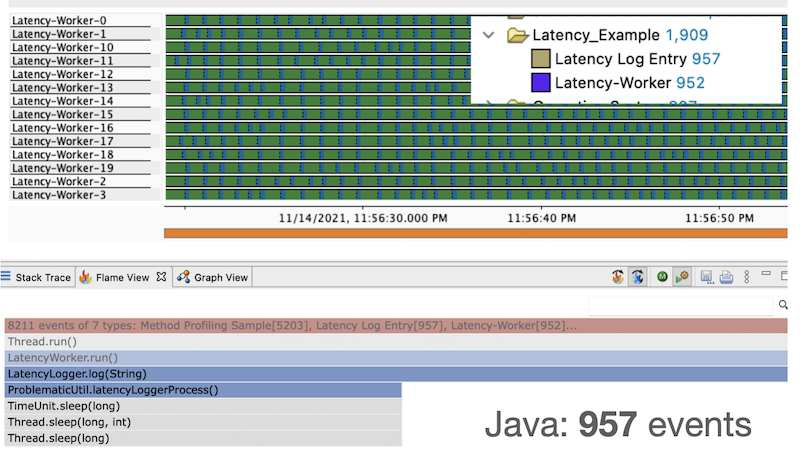 How is the Kotlin app doing? 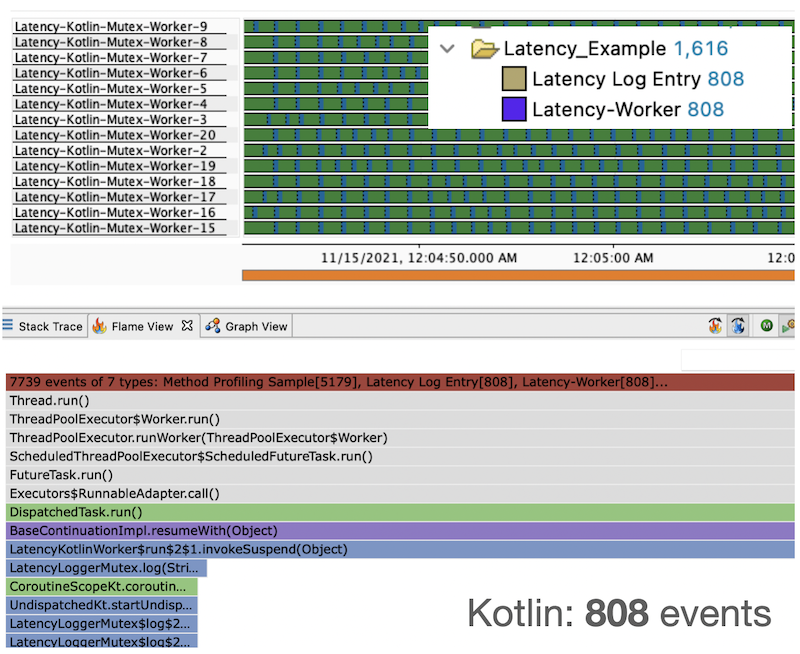 Watching the results we can observe that the results in both applications are very comparable!

Important to note: the time window for the examples was just 45 seconds and the examples were more set up from a research perspective to highlight a specific issue.

We have also discovered, in a bit more detail, a composition of the Kotlin coroutines framework[7] (asynchronous and non-blocking library)

Hope that the article helped to increase an awareness about JMC/JFR[1] possibilities, how it can be utilized in app development and you had fun comparing Java and Kotlin along the way.

Note: All examples are available on my GitHub account [2]