This write-up is especially for those who want to try their hands at coding an Artificial Neural Net. How it is done mathematically doesn’t need an explanation from someone like me who is a programmer and not a scientist or a researcher. There are numerous training videos that you can go through and learn. I have gone through Prof Patrick Winston’s class as part of MIT OpenCourseWare and understood how the feed-forward and back-propagation technique works.

Through this article, I will explain the steps that you will need to follow to build a fully configurable ANN program (with N number of input features, N number of hidden layers, N number of neurons in each hidden layer, N number of output neurons). I would encourage to write your own custom program following the steps. As long as we adhere to the best practices of programming, test its efficiency, performance, we are good to go.

I did the same when I wrote my own program. I had the math with me and built the program one function at a time. The best way to know that your program is somewhat working is to pick an existing example/dataset from the internet and compare your program's output with that.

Take the following as an example. Input features = 3 (extra neuron is the Bias), Hidden Layers (5 Neurons, extra one is the Bias), 2 Output Neurons 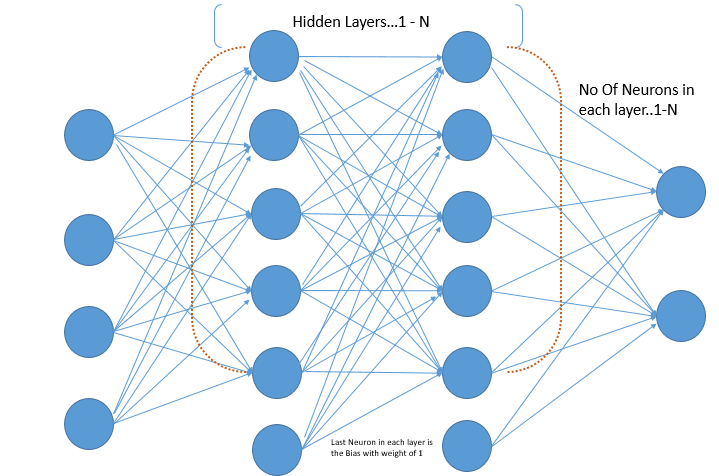 It is very important that we first understand how the weight data structure works. Every Neuron in each layer will have a connection from every neuron from the preceding layer (including the Bias neuron). That would mean the following:

The Weight Array will look like this, and I will explain in the next steps how to build this Weight Array.

Weight Array for this example with ‘Input features = 3 (1 extra neuron for the Bias), Hidden Layers (5 Neurons, extra one for the Bias), 2 Output Neurons will look something like this

Define a function to train the network. It is always advisable to start with training one sample and then extending it to your complete dataset. It is easier to debug, and what you will do for one sample will be applicable to all samples (running in a FOR loop the same steps for each row in the dataset)

--RUN for N Number of Iterations in a FOR Loop

-- For each row in the Input Array of Sample Data, do the following operations

Initiate the Weight Array as per the structure given above:

You will have to take care of sub_arrays, main_arrays, and Dictionary objects, while you are building the weighted network, as this is the most important initialization step

In the Forward Propagate, we will be trying to calculate the output by first multiplying each input by the corresponding weight of each neuron and then passing each neuron output through the Activation/Sigmoid function. We will do this for each neuron in each hidden layer, including the output layer.

The hidden layer data structure post-processing will look like this. Explanation on how to program the function is given below

The high-level programming steps are as follows:

The final output that will come out of the Output Neuron layer will have an array size the same as the number of output neurons. (In this example that I am running, the size will be 2.)

This is the simplest of all the functions.

This is the most complex piece of the whole program, and you will have to take special care of how you are traversing the weight network, hidden layer outputs, and calculating the Delta_Error of each neuron as you are traversing backward

How the partial derivative is derived at and the calculation is explained in various courses. What we have to remember is the following chain rule and the same process of calculating can be extrapolated to N number of hidden layers and all Neurons.

The picture above shows the back propagation calculation for 1 neuron. Like the forward path, where every output from each neuron of each layer connects to every other neuron in the next layer, the delta error of each neuron in the next layer will have a contribution to the error calculation of each neuron of the preceding layer. I have explained the steps below. I am pasting the hidden layer output again below. This array will now be traversed in the reverse order

Loop through the weight network in the reverse order.

For the very first time, the if block below will be executed; then subsequent iterations will execute the else block until we reach the first hidden layer. With every iteration of the, reset the error array:

Finally, outside the IF-ELSE, we will have to write the following

The Delta network after the calculation will look like this:

This is the step to update the weight network again. All we need in this step is the Weight Network, Hidden layer output array, and the Delta Error Network (all three, we have calculated above).

Before we proceed, we need to replace the last element of the Hidden layer output array, which is the output Layer output with the input elements (because if you look at the hand written calculation above, the partial derivative of the Performance w.r.t the first layer weight is X1-the input value)

I ran the program with 200 iterations with a learning rate of 0.5 and got the following output.