This tutorial introduces machine learning and data science concepts for developers. On the web, we already have many excellent resources for learning data science, however, the sheer amount of material can, in itself, be daunting. This is based on my insights from the Enterprise AI course and also the Data Science for IoT course which I teach at Oxford University.

This tutorial draws on the content on the web and adds three new elements:

I also address a broader question: Which maths and stats techniques do you need for data science?

A knowledge of algorithms (maths and stats) is the main differentiator between traditional programming and analytics-based programming.

Having said that, it helps to start with programming and approach the maths (initially) through APIs and libraries. I find that this technique works better because more people are familiar with programming than with maths.

Here is a list of maths and stats techniques useful for data scientists:

Data science includes a formal set of steps. Hilary Mason and Chris Wiggins describe a process called OSEMN which is summarized as:

Broadly, we will also follow this sequence in this tutorial.

What Is Machine Learning?

As we see above, Machine learning can be seen as a step in the wider data science process. Tom Mitchell says this in his book Machine Learning:

“The field of machine learning is concerned with the question of how to construct computer programs that automatically improve with experience.”

The formal definition of machine learning is as follows:

“A computer program is said to learn from experience E with respect to some class of tasks T and performance measure P, if its performance at tasks in T, as measured by P, improves with experience E.”

Visually, we can see this process as: 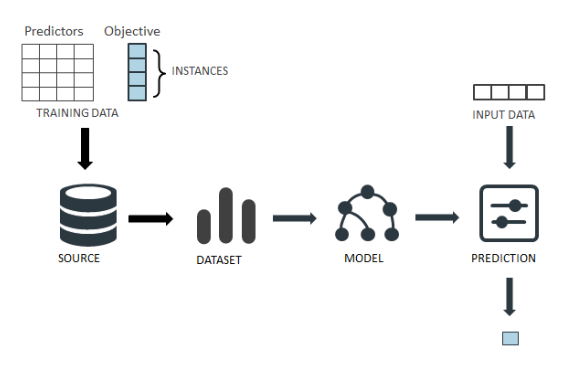 Check out the tutorial here.