Thanks to Scott Sellers, President and CEO at Azul Systems, for taking me through their collaboration with Microsoft to make fully compatible and compliant commercial builds of Java SE available for Java developers on Microsoft Azure.

Azul Systems will provide fully-supported Zulu Enterprise builds of OpenJDK for Azure for all long-term support (LTS) versions of Java, starting with Java SE 7, 8, and 11

The new Azul and Microsoft initiative is designed to ensure that Java developers and Java-based businesses using Microsoft Azure have access to fully-supported, certified, open source builds of OpenJDK with timely security updates and bug fixes – without incurring additional licensing or support costs.

The Java SE landscape is undergoing a change in release cadence and support availability. In September 2017, Oracle announced the end of free public security updates and platform bug fixes for Java SE 8 and Java SE 11, effective January 2019. This announcement was in addition to the introduction of a six-month cadence of future Java releases, and the designation of long-term support (LTS) versions of Java SE to be released every three years.

Azul’s Zulu Enterprise builds of OpenJDK are compatible and compliant builds of OpenJDK that have been extensively tested and certified by Azul Systems. As with Oracle’s commercially supported Java SE products, Azul’s builds of OpenJDK have quarterly security updates and bug fixes, which are also an integral part of Azul’s offering for Azure.

To help ensure Azure customers are able to adopt new releases of Java at their own pace, Azul provides long-term support (LTS) for major releases of Java SE, starting with Java 7 and 8, and the newly-released Java 11. This support includes the backporting of security updates and bug fixes to Java 7 and 8 reported in newer versions of Java such as Java 11 and ensures the continued stability and security of older versions of Java. The chart below highlights the announced support for Zulu Enterprise on Microsoft Azure: 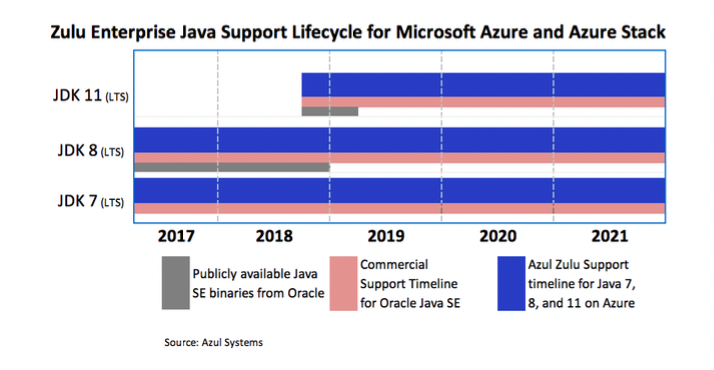 Perspective on the New Azul Systems and Microsoft Java Initiative

“For the past year, many aspects of the Java landscape have been in transition," said John Abbott, co-founder and Distinguished Analyst at 451 Research. “Developers need certainty and the assurance of continuing support and maintenance for their technology platform of choice. Microsoft will help to provide that assurance through its collaboration with Azul, a long- established contributor of innovation to the Java community.”

“We have been delivering certified builds of OpenJDK to Microsoft for more than five years,” said Sellers. “With today’s announcement, we extend our collaboration by standing with Microsoft to deliver fully-supported builds of Zulu Enterprise to the community of Azure-based Java developers – at no additional cost to them -- for both development and production use.”

John Montgomery, Partner Director of Program Management for Developer Tools at Microsoft Corp. said, “Even as Java moves forward, there are many Java applications that depend on Java 7 and 8. We’re pleased to be able to work with Azul to support Java for our mutual customers, starting from Java 7, ensuring that customers can move forward to new versions of Java at their own pace, with confidence that they’ll be able to run on a compatible, supported, and secure Java platform for many years.”

Details of the New Support for Java on Azure

As a result of this new initiative, Azure-based Java developers will be able to consume certified, production-ready builds of OpenJDK from multiple locations and in a variety of package types. Furthermore, Azure users will also be able to build unlimited Docker images, which include the supported Zulu Enterprise builds of OpenJDK using production editions of any Windows or Linux distros available on Azure.

Current distributions of Zulu Enterprise for Azure and Azure Stack users include the following: