As per my understanding, the goal of object detection is to find the location of an object in a given picture accurately and mark the object with the appropriate category. To be precise, the problem that object detection seeks to solve involves determining where the object is, and what it is.

However, solving this problem is not easy. Unlike the human eye, a computer processes images in two dimensions. Furthermore, the size of the object, its orientation in the space, its attitude, and its location in the image can all vary greatly.

From the task of image recognition, let's consider an image task. In this task, we need to identify the object in the figure and use a box to indicate its location.

Technically, the above task involves image recognition and positioning.

Before we begin, let us take a closer look at Region-based Convolutional Neural Networks (R-CNN).

Approaching Positioning as a Matter of Regression

If we look at this as a matter of regression, then we need to predict the values of the four parameters (x,y,w,h) to get the position of the box.

Now we need to perform two fine-tuning operations. We can perform the first round on ALexNet, while in the second operation, we will convert the head to a regression head. The front remains unchanged, and we will just have to fine-tune it.

Where to add the regression?
There are two available methods:

Performing the regression is quite difficult, so we need to find a way to turn this into a matter of classification. The time to merge training parameters is much longer for regression, so the network above uses a classification network to calculate the link weights of different parts of the network.

According to the scores, we select the lower right box as a prediction of the location of the target.

Note: Sometimes, we select the two boxes with the highest scores, then take the intersection of the two boxes as the final position prediction.

Uncertainty: How big is the box?
After taking different boxes, we first sweep from the upper left corner to the lower right corner. This method is incredibly crude.

Let's sum up the thought process:

For the first image, we use boxes of various sizes (traversing the entire image) to traverse the image and input it to the CNN. Then, the CNN will output a classification of the box and then x, y, w, h of the image in the box (regression).

This method is too time-consuming to be considered an optimization. The original network is as follows: 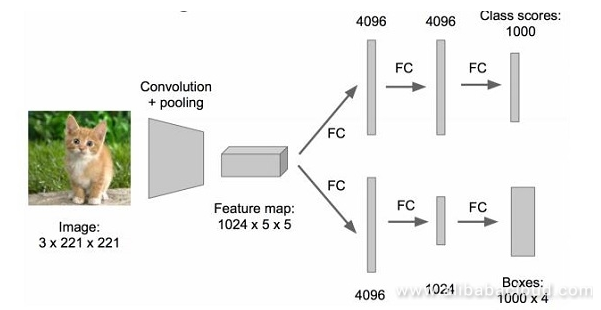 To optimize it, change the fully connected layer to a convolution layer to increase speed.

What do we do when there are many objects in the image? In an instant, the difficulties of the task are exponentially magnified. Now the task has become: multi-object recognition + positioning the multiple objects

So can we consider this as a classification task? 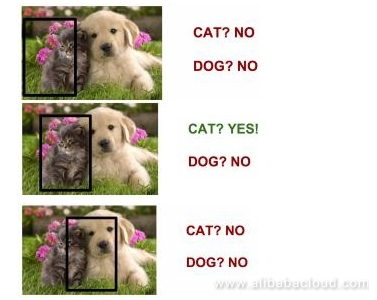 What is wrong with seeing it as a classification problem?

If it's a matter of classification, then how can we go about optimization? I don't want to test so many different locations! Of course, there is a solution to this problem.

First, we find boxes that may contain objects (that is, 1000 or more candidate boxes). These boxes may overlap so that we can avoid all boxes with heavy enumeration.

Of course, there is not much consensus over how to select these candidate boxes in the "selective search" algorithm used in the extraction of candidate boxes.

The Arrival of R-CNN

The above ideas fueled the development of R-CNN. Let's look at an implementation of R-CNN with the same image.

Step 5
Use regression to fine-tune the position of the candidate boxes. For each class, train a linear regression model to determine if the box is optimized.

The idea of Spatial Pyramid Pooling (SPP) has made a significant contribution to the evolution of R-CNN. Here we will give a brief introduction of SPP Net.
SPP has two characteristics:

1. Integrate the spatial pyramid method to provide scale input to the CNNs
A full connection layer or classifier follow General CNN. They all need a fixed input size, so they have to crop or warp the input data. This preprocessing can cause data loss or geometric distortion. The first contribution of SPP Net is the addition of the idea of a pyramid to CNN to achieve multi-scale data input.

As shown in the image below, an SPP layer is added between the convolutional layer and the fully connected layer. Now, the input to the network could be of any scale. In the SPP layer, the filter of each pooling will adjust in size according to the input, and the scale of the output of the SPP will always be set. 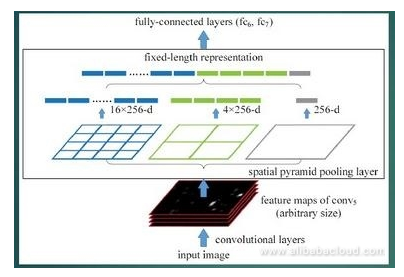 2. Only extract convolutional features once for the original image
In R-CNN, each candidate box is resized to a standard size and then divided into CNN input, which reduces efficiency.

On the other hand, SPP Net only applies one convolution to obtain a full feature map, then finds the map patch of the zaifeature map of each candidate box, and treats this patch as convolutional feature input of the SPP layer and later layers. This saves a lot of computing time as it is a hundred times faster than R-CNN. 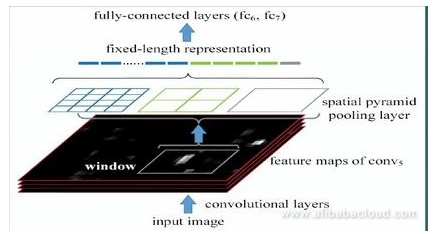 So what are the differences between R-CNN and Fast R-CNN?

Let's first talk about the shortcomings of R-CNN. Even though it uses selective search and other preprocessing steps to extract the potential bounding box for input, R-CNN still has a serious speed bottleneck - the repeated computations will occur as the computer finds the features for each region.

Fast R-CNN was born to solve this specific issue. 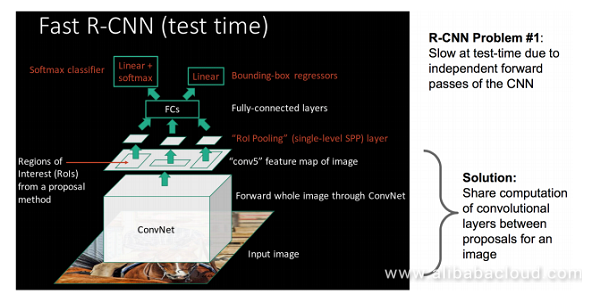 In Fast R-CNN, there is a network layer called ROI Pooling similar to a single layer SPP Net. This network layer can map input of different sizes to a vector of a set length, so we can know that the conv, pooling, relu, and other operations don't need the input of a specific size. Therefore, after we have applied these operations to the original image, even though the varying size of the input images creates a feature map with a varying scale (meaning that we cannot directly connect them to a fully connected layer for classification), we can still add an impressive ROI Pooling layer. This layer then extracts a feature graph from each region according to a set dimension, then uses a normal softmax for category recognition.

Moreover, the processing path of the previous R-CNN was first to raise a proposal, then use the CNN to extract features, and next use the SVM classifier. Finally, perform bbox regression, and then, in the Fast R-CNN, the author deftly puts the bbox regression into the neural network and merges it with the region classification to form a multi-task model.

Experiments have proven that these two tasks are capable of sharing convolutional features and accelerate both. An essential contribution of Fast R-CNN is that it makes it possible to create a Region Proposal + CNN framework. It seems that multi-class inspections significantly increase processing speed while ensuring accuracy.

Let's summarize what we have discussed about R-CNN so far:

It's easy to see why Fast R-CNN is so much faster than R-CNN; unlike R-CNN, which gives each candidate region to the deep network, the features are added to the entire map, and the candidate frame is mapped to conv5. SPP only needs to calculate the features once, the rest just need to operate on the conv5 layer.

Performance improvements are also quite obvious:

There is no doubt that Fast R-CNN brings major improvements to traditional CNN. However, a major problem with Fast R-CNN is that it uses selective search to find all of the candidate boxes, which is quite time-consuming.

So is there a more efficient way to find these candidate boxes?

Let us look at a specific implementation of RPN: 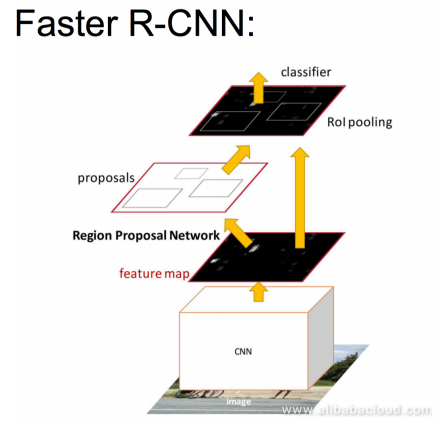 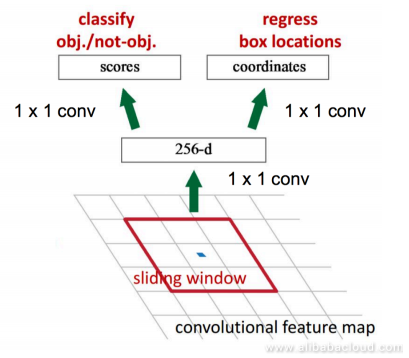 One type of network with four loss functions: 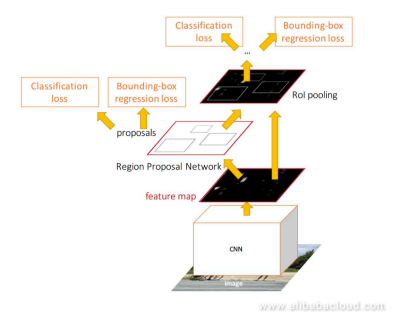 The primary contribution of Faster R-CNN is that it designs a network RPN that extracts candidate areas instead of wasting time on selective search, which significantly accelerates the detection.

In summary, having walked the path from R-CNN, SPP-NET, Fast R-CNN, and Faster R-CNN, the process of using deep learning target detection becomes more and more streamlined, accurate, and fast. We can say that target detection methods using R-CNN based on region proposal are currently the most prominent branch in the field of target detection technology.