For this Pipeline, we will be using 2 Github repositories.

1. Jenkins-complete: This is the main repository. This repo contains configuration files for starting Jenkins Container.

2. Simple-java-maven-app: This is our sample Java application created using Maven.

We need to understand both repos before building this automation.

This is the core repository as this will contain all the necessary files that build our Jenkins image. Jenkins officially provides a Docker image by which we can start the container. Once the container is started, we need to perform many activities, such as installing plugins, creating a user, and more.

Once these are created, we need them to create credentials for Github to check our sample Java application, and a Docker credential for pushing the created Docker image to Dockerhub. Finally, we have to create the pipeline job in Jenkins for building our application.

This is a long process; our goal is to completely automate all these things. This repo contains files and configuration details which will be used while creating the image. Once the image is created and run, we have:

If we check out the source code and do a tree, we can see the below structure,

Let's see what each file talks about

default-user.groovy - this is the file that creates the default user admin/admin.

executors.groovy - this is the Groovy script that sets the executors in the Jenkins server with value 5. A Jenkins executor can be treated as a single process which allow a Jenkins job to run on a respective slave/agent machine.

credentials.xml - this is the XML file which will contain our credentials. This file contains credentials for both Github and Docker. The credential looks like this:

If you see the above snippet, we have the id as “github,” username and encrypted password. The id is very important as we will be using this in the pipeline job that we create.

How Can I Get the Encrypted Values for My Password?

In order to get encrypted content for your password, go to a running Jenkins server -> Manage Jenkins -> Script console. In the text field, it provides the option enter the code,

The same thing is used to generate the DockerHub password, too.

sample-maven-job_config.xml - this is the XML file which contains our pipeline job details. This will be used by the Jenkins to create a job by the name “sample-maven-job” in the Jenkins console. This job will be configured with the details defined in this XML file.

The configuration is simple, Jenkins will read this file to create a job “sample-maven-job” pipeline job, sets the SCM pointing to the Github location. This will also be configured with the credential set to “github” id. This looks something like this, 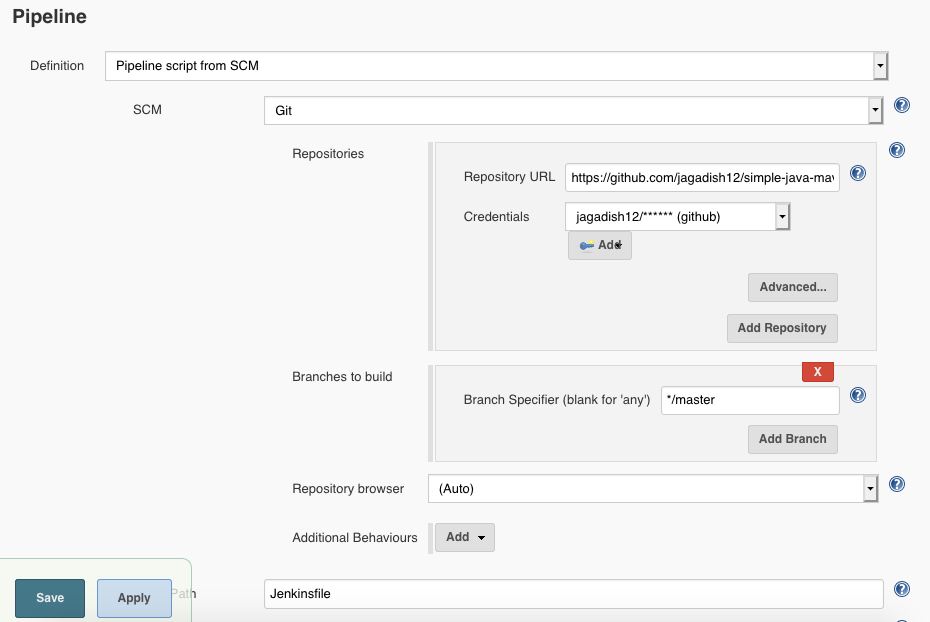 Once the scm is set, it also set the job with a Token for triggering the job remotely. For this, we have to enable the “Trigger builds remotely” option and provide a token over there. This is available under the “Build Triggers” section in the pipeline job. I have given the token as “MY-TOKEN” which will be used in our shell script to trigger the job.

trigger-job.sh - This is a simple shell script which contains a curl command for running the job.

Though we create the entire Jenkins Server inside a container, and create a job, we need a way to trigger that job in order to make that whole build automated. I preferred a way of:

I have written this simple shell script to trigger the job once the container is up and running. The shell script is a simple curl command sending a post request to the Jenkins server. The content looks something like this.

Install-plugins.sh - This is the script that we will use to install the necessary plugins. We will copy this script to the Jenkins images passing the plugin names as arguments. Once the container is started, the script is ran taking the plugins as arguments and are installed.

Dockerfile - The most important file in this automation. We will use the Docker file to build the whole Jenkins server with all configurations. Understanding this file is very important if you want to write your own build automations.

FROM jenkins/jenkins:lts - We will be using the Jenkins image provided officially.

To allow access for a non-privileged user like Jenkins, we need to add the Jenkins user to the Docker group. In order to make things works, we must ensure that the Docker group inside the container has the same GID as the group on the host machine. The group id can be obtained using the command  getent group Docker .

Now the HOST_DOCKER_GROUP_ID is set as build argument which means we need to send the group ID for Docker on the host machine to the image file while building this. We will be sending this value as an argument which builds that.

The next instruction is to run the “install-plugins.sh” script, passing the plugins to be installed as arguments. The script is provided by default or we can copy from our host machine.

We set the JENKINS_USER and JENKINS_PASS environment variables. These variables are passed to the default-user.groovy script for creating user admin with password admin.

This lets Jenkins be installed in silent mode

The above scripts as we discussed will set the executors to 5 and create a default user admin/admin.

One important thing to remember here is, if we check the Jenkins official Docker image we will see a VOLUME set to /var/jenkins_home. This means this is the home directory for our Jenkins server similar to /var/lib/jenkins when we install on physical machine.

But once a volume is attached, the only root user has the capability to edit and add files over there. In order to let non-privileged user “jenkins” copy content to this location, copy everything to the location /usr/share/Jenkins/ref/. Once the container is started, the Jenkins will take care of copying the content from this location to the /var/jenkins_home as Jenkins users.

Similarly, scripts copied to /usr/share/jenkins/ref/init.groovy.d/ will be executed when the server gets started up.

In the above case, I am setting my job name as “sample-maven-job” and creating the directories and copying the files.

These instructions are very important, as they create a jobs directory in the Jenkins home where we need to copy the job configuration file. The latest/ and builds/1 also need to be created in the job location for that specific job.

Finally, we are also copying the credentials.xml and trigger-job.sh files to the /usr/share/jenkins/ref. Once the container is started, all content available in this location will be moved to /var/jenkins_home as Jenkins user.

Once we are good with the Docker file, to create an image from this we need to run,

From the location where we have our Dockerfile, run the above Docker build instruction. In the above command, we are passing the build-arg with the value of the group ID for the Docker user. This value will be passed to the “HOST_DOCKER_GROUP_ID” which will be used to create the same group ID in the Jenkins Docker container. The image build will take some time since it needs to download and install the plugins for Jenkins servers.

Once the image is built, we need to run the container as

The most important one is the /var/run/Docker.sock mount. Docker.sock is a UNIX socket that Docker daemon is listening to. This is the main entrypoint for the Docker API. This can also be a TCP socket but by default, for security reasons, it is a UNIX socket.

Docker uses this socket to execute the Docker command by default. The reason why we mount this to a Docker container is to launch new containers from the container. This can also be used for auto service discovery and logging purpose. This increases attack surface so we need to be very careful mounting this.

Once the command is run, we will get the Jenkins container up and running. Use the URL “<ip address>:8880” to see the Jenkins console. Once the console is up, login using “admin/admin.” We will see our sample-maven-job created with SCM, Token and credentials But not ran yet

In order to run the job, all we have to do is to take the containerID and run the trigger-job.sh job as below,

Once you run the command we can see the building the pipeline job get started.

Jenkinsfile - The Jenkins file is the core file that will be run when the sample-maven-job is started. The pipeline job downloads the source code from the GitHub location using the GitHub credential.

The most important thing in the Jenkinsfile is the agent definition. We will be using “agent any” for building our Java code from any available agents. But we will define agents when we go to specific stages to run the stage.

If you see the above stage, we are setting the agent as Docker with image file “maven:3-alpine.” So Jenkins will trigger a Docker run maven:3-alpine container and run the command defined in the steps as  mvn -B -DskipTests clean package .

Similarly, the test cases are also run in the same way. It triggers a docker run   with the Maven image and then runs mvn test on the source code.

The other important element this is the environment definition. I have defined the registry name as “docker.io/jagadesh1982/sample” which means when we create an image with the final artifact (jar), the image name will be “docker.io/jagadesh1982/sample:<version>. This is very important if you want to push the images to the Dockerhub. Dockerhub expects to have the image name with “docker.io/<user Name>/<Image Name>” in order to upload.

Once the building of the image is done, it is then uploaded to the DockerHub and then removed from the Jenkins Docker container.

Dockerfile - This repo also contains a Dockerfile which will be used to create a Docker image with the final artifact. This means it copies the my-app-1.0-SNAPSHOT.jar to the Docker image. It also run the container from image. The contents looks like this: