React in the Real World

Created by Facebook, React was initially released in 2013. React continued to gain momentum until it looked like it was going to hit a snag in 2017 over licensing. The BSD+Patents license that Facebook was insisting on created potential Intellectual Property issues for developers. Fortunately, in September of 2017 Facebook backed down and re-licensed React under the more acceptable MIT license. The current release is 16.2.

Like the other popular frameworks, React is a free, unlicensed library so there are no perfect usage statistics, but there are several places we can look to for a good idea of overall adoption. It has over 88K stars on GitHub, and over 7 million npm downloads per month. Some of this traffic might, of course, be from development machines or mirrors, but these are good quick stats to get an idea of just how popular the library is. 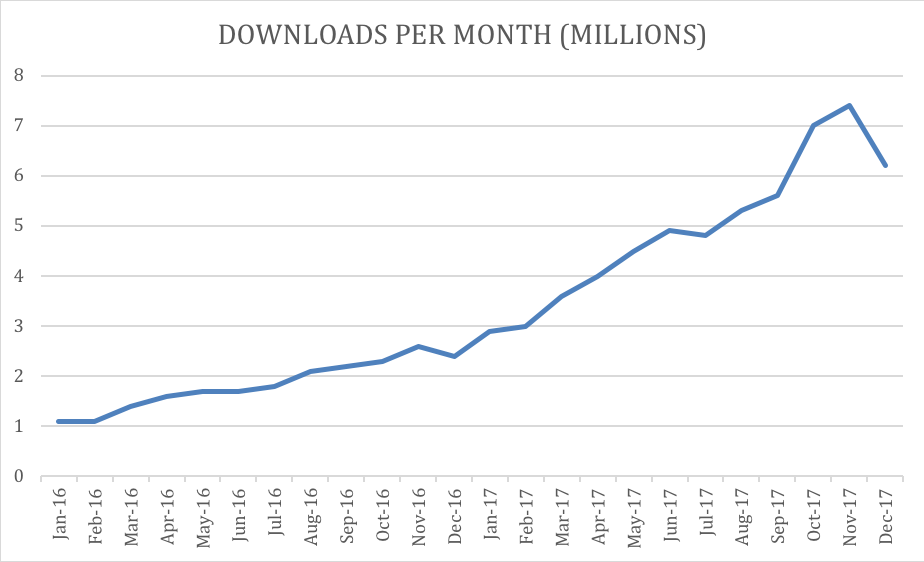 React has some unique core concepts. It has a virtual DOM, JSX components, input properties, and props. Also, each React component has a state and a lifecycle, which we will go into.

The virtual DOM is a node tree, just like the DOM. If you're familiar with how the DOM works within a web browser then it will be easy to understand the virtual DOM. It's very similar, but it's all virtual. There's a list of elements, and attributes, and content that exists as JavaScript objects with properties. When we call a render function - and each React component has a render function - it actually creates a node tree from that React component whether it's just one single component, or whether we're rendering child components as well. It lists out the whole tree. It also updates that same tree whenever data models are changed - whenever we update state or change anything within the component.

React updates the real DOM in three steps. Whenever something has changed, the virtual DOM will re-render. Then the difference between the old virtual DOM and new virtual DOM will be calculated. Then from there, the real DOM will be updated based on these changes. Instead of constantly having to work with the real DOM, which is very expensive, everything is handled virtually until we absolutely need to update the DOM. At that point, we'll go ahead and do that expensive call.

JSX is officially an XML-like syntax that is close to HTML, but not quite HTML. It is actually JavaScript with HTML sprinkled in. It's really just syntactical sugar for something like this:

It all stems from the react.createElement. Instead of having to create an element by hand, we have the component MyButton which has several different attributes that we pass into it. We don't have to deal with creating the element, and then defining the tag, and then passing in all the attributes and everything like that.

React lets us split the UI into independent reusable pieces. Components are like JavaScript functions. We have an arbitrary amount of input, set the props, and then we return the React elements. We're always returning a render function that has the elements that we want it to display. It's very simple to begin with, but we can quickly get advanced with this. The render function is really key here because every component will have a render function. We'll see here we have the function Welcome(props), for example.

We can also write it as @class Welcome which extends React.Component in the ES6 way if we want to work a little bit more with classes.

In the first example, we return the simple HTML element. In the ES6 example, we have the same thing but then render, and this is just a little bit more syntax thrown in for passing back an HTML element.

Props is what gives our components and attributes overall properties. This is how we pass in data. This is how we deal with various different attributes. As we see here, in this example, we have the shopping list name, we pass in a name here, and we'll be able to use this.props.name while rendering this particular component. This is an easy way to pass data in and out.

Each component has a state, and it actually manages its own state as well. This can be extracted and set in our code. As developers, we're actually responsible for updating and dealing with state. In the example below, we see here that in the beginning when we create this clock component in the constructor, we have this.state. We pass in a new date, and then we can actually output that in the render function. We can use states easily to perform common tasks like setting the state and extracting the state easily.

Each component has a specific lifecycle that we have control over. We have mounting, updating, and unmounting functions. We have a full list of different lifecycle hooks that we can subscribe too. The constructor, for example, can help us set up the initial state. Then, from there, we have other events that we can hook into.

The easiest way to get started with React is through create-react-app CLI. That's the official React CLI. Then we can create a new app, and that bootstraps the entire application. We simply use create-react-app my-app. Then we go ahead and kick things off with npm start. This command just runs through a custom npm script to kick off the app and set up a server for us, so we can start working on the app itself.

We covered a lot of content quickly to present a 'taste' of React and we have not done more than scratch the surface. However, this should be enough to give everybody a high-level look at what we have available within React.