f x playground is a javafx-based prototyping tool or live editor that eliminates the step of compiling java code. this concept isn’t new, for instance the web world there are many html5 playgrounds that offer online editors that enable developers to quickly prototype or experiment with various javascript libraries. this allows the developer to focus on visualizations or ui details without needing to set-up an ide project or mess with files. even older (pre-dating) than playgrounds are repls ( r ead e val p rint l oop) where dynamic languages such as groovy, python, ruby, etc. provide an interactive interpreter command line tool to allow developers to quickly script code to be executed. scala is a compiled language, but also provides a repl tool.

after finishing the book javafx 8 introduction by example i noticed each example was created as separate netbeans projects which seemed a little overkill for small examples. because the book is based on java the language each program needed to be compiled (via javac ) prior to execution. larger projects will typically need to be set-up with a proper classpath and resources in the appropriate directory locations. even larger projects will also need dependencies which typically reside on maven repositories.

b ased on timing i was able to submit a talk regarding javafx based playgrounds just in time. after awhile i was pleasantly surprised that my proposal (talk) was accepted. you can check out the session . also, i will be presenting with my good friend gerrit grunwald ( @hansolo_ ). so, be prepared to see awe-inspiring demos. since the talk is a bof (birds of a feather) the atmosphere will be low-key and very casual. i hope to see you there!

the javaone talk is titled “javafx coding playground (javafx-based live editor tool) [bof2730]“.  based on the description you’ll find that the tool will be using the new! nashorn (javascript) engine to interact with javafx primitives. the figure below depicts the fx playground tool’s editor windows and a javafx display area. starting clockwise at the lower left is the code editor window allowing the user to use javascript (nashorn) to interact with nodes. next, is the javafx fxml editor window allowing the user to use fxml (upper left). the fxml window is an optional.  in the upper right, you will notice the javafx css editor window allowing you to style nodes on the display surface. lastly, to the bottom right is the output area or better known as the display_surface. 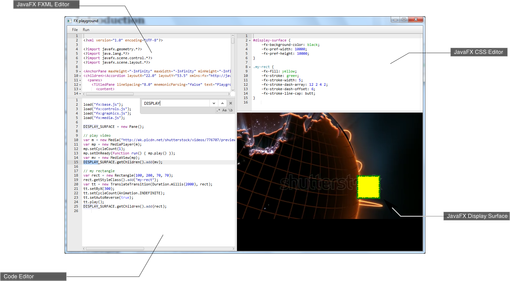 b ecause fx playground is still in development i will give you a glimpse of some demos that i’ve created on youtube. the following are examples with links to videos.

t here are plans to opensource the code, but for now there is much needed functionality before public consumption.

the following features are a work in progress:

i want to thank oracle corp. especially the following engineers who helped me (some of the engineers below are not oracle employees):

7 of the best code playgrounds - http://www.sitepoint.com/7-code-playgrounds

about these ads
JavaFX