With the release of Gradle 2.10 there is a nice feature of Lint check HTML reports.

Simply speaking, whenever you run a build, a nice formatted HTML report will be generated. It is a VERY nice touch to the lint XML reports and makes the report much more readable and hence more actionable. It will save you time and make your code more robust and stable.

This feature was contributed by Sebastian Schuberth.

To check it out do the following:

After the build finishes, scroll via its output and you will see something similar to:

Open the HTML link and you would be pleasantly surprised. 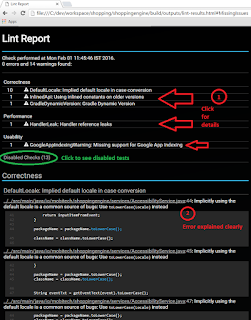 IMHO, the generated report is visually better than the report being generated via Android Studio ->Code Inspection. It is very convenient to read the warnings/errors and correct.

Another advantage is that report will be generated on every build and not on demand.

The lint HTML report would be generated from the command line and not via Android Studio default build.

This article was originally posted here.