unstructured data has become the best friend and maybe the last defense of the traditional worker. the more unstructured data in the enterprise, the greater the need for people to solve the problem of information that’s hard to understand, aggregate, analyze, make decisions against and act upon. great outcomes depend on how accurately and quickly those steps happen.

ironically, inefficient work also creates unstructured data, meaning that in the modern office, having more people hinders the organization’s ability to automate, and maybe even thwarts it. there’s even one more catch … having less than enough employees for the workload forces the search for automation that increases productivity, reduces unstructured data and makes the office more efficient. hire more: get less .

in an age of ubiquitous and growing data, (a.k.a. big data), this paradox becomes an acute problem for organizations. big data without automation is a big mess. unstructured data clogs the big data pipes and the result is an expensive plumber … or worse.

it’s not a secret for many 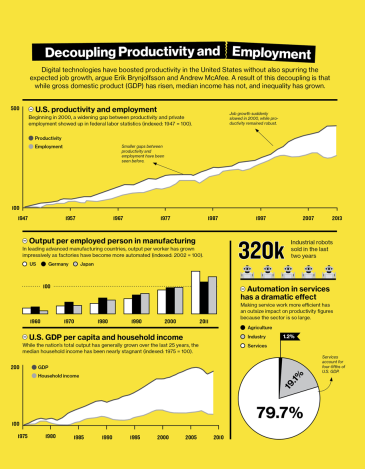 the evidence that many companies already know this is in the newspapers: our leaders wring their hands about the unemployment rate, still well above the numbers from before the recent economic crisis. they do this despite the evidence that modern economies are going through a fast evolution from the worker economy of the industrial age to an automation-driven workplace where a handful of people perform the work that was only recently done by teams of people. in an mit technology review article how technology is destroying jobs , author david rotman quotes mit sloan school of management professor erik brynjolfsson:

productivity is at record levels, innovation has never been faster, and yet at the same time, we have a falling median income and we have fewer jobs. people are falling behind because technology is advancing so fast and our skills and organizations aren’t keeping up.

organizations aren’t keeping up because the old ways of doing business are ingrained beliefs in the heads of enterprise leadership, especially our most senior. we build teams to accomplish work without thinking about this “automation paradox” that pushes down productivity (and increases unstructured data) as team size grows. 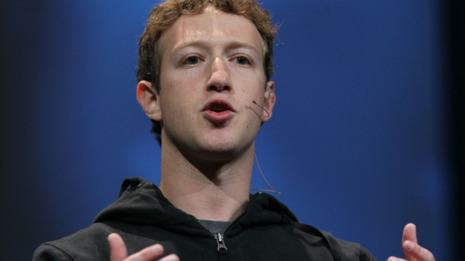 so how do you size a team appropriately? it depends entirely on how many superstars you have versus how many average people. mark zuckerberg was quoted in the ny times a couple of years back as saying, “someone who is exceptional in their role is not just a little better than someone who is pretty good. they are 100 times better.” yes, he was talking about engineers, but if zuck’s numbers are to be believed (and i suggest they apply broadly), the key is having the superstars to begin with so that the size of the team can remain small, with average people supporting the above average, helping them to get the grunt work done. the real problem, however, is organizational resiliency if it depends on one superstar. when they leave, will you promote an average person and expect the same outcome? of course not.

so every team needs to have superstars in the making. recruiting and hiring needs to be so good that the organization can find nascent talent and have depth on the bench. the cost, ironically, of having smaller teams with top talent leaning on automation is lower than having larger teams of average folks clogging up the plumbing. plan small, hire carefully, and depend on the team to creatively automate to solve the shortfall in labor. you won’t help the economy in the short term, but when our workplaces are retooled to this philosophy (including how we train our next generation), we’ll all be better off.