There's a lot of buzz about Docker containers, and Microsoft will soon release support in Windows Server 2016. The notion of containers for supporting SQL Server is new, and many DBAs understandably ask, "Why use containers?" The reasons are many:

More efficient support for development and test, providing users self-service capability, all while reducing the number of VMs used, simplifying host maintenance, and delivering license savings are some of the reasons for the growing popularity of SQL Server containers.

Interestingly, Microsoft has been quiet on plans to support SQL Server in Windows Server 2016 containers. Earlier this year Microsoft demonstrated SQL Server Docker support using the future Linux based SQL Server, strongly suggesting  that the SQL Server division will bypass Windows container support altogether. We understand why this would be the case, given some significant limitations in Microsoft's container design, and blogged about the design issues.

Begin by installing the WinDocks Community Edition. It will detect and configure support for whatever SQL Server edition you have installed. To start the WinDocks daemon, open a Command Prompt as Administrator, and type:

With the daemon running, open a second Command Prompt to use as the local client (Administrator rights are not needed for this), and enter:

The following exercises will be presented as a client running on the WinDocks host.  The same operations can be performed remotely, but involves a more complex command syntax.

WinDocks delivers SQL Server containers in seconds, along with Docker commands to streamline the use of SQL Server databases. This exercise introduces the use of ADDDB and MOUNTDB commands.

Using File Explorer open: c:\windocks\samples\TestADDDB folder to see a Dockerfile and the venture.mdf database. Open the Dockerfile using Notepad. Dockerfiles begin with a Source Image, followed by sequential instructions for copying, adding, and running commands. This Dockerfile uses the ADDDB command to copy the venture.mdf into the container.

A subset of the container ID can be used .

The Docker commands and return output is shown below. Each container is a fully isolated SQL Server instance with name space isolation.

Each SQL Server container is accessible via SQL Management Studio. This workflow illustrates the popularity of Docker and containers for rapid sharing of SQL Server instances in identical, isolated containers. A SQL Server change script can be exported to update the source database as needed.

Rather than relying on multiple VMs for development, a single host can typically support scores of container instances.

The successful Mount point is written to the client return string, and the database is accessible through normal SQL Server Management tools.

WinDocks also supports integrating SQL Server containers with .NET and other containers. Open the c:\windocks\samples\testdotnet folder to see a simple .NET application. The folder includes a web.cfg file, which is used to integrate a .NET application with a SQL Server instance. Open the web.cfg file using Notepad and note the "connection string" section and references to the host address, port, and SQL credentials. Update these with the Port and SQL sa password from the last exercise.

Save and close the file (be sure not to save the file as a .txt file).  Run:

Open a web browser and navigate to the host address and port to view the integrated application. 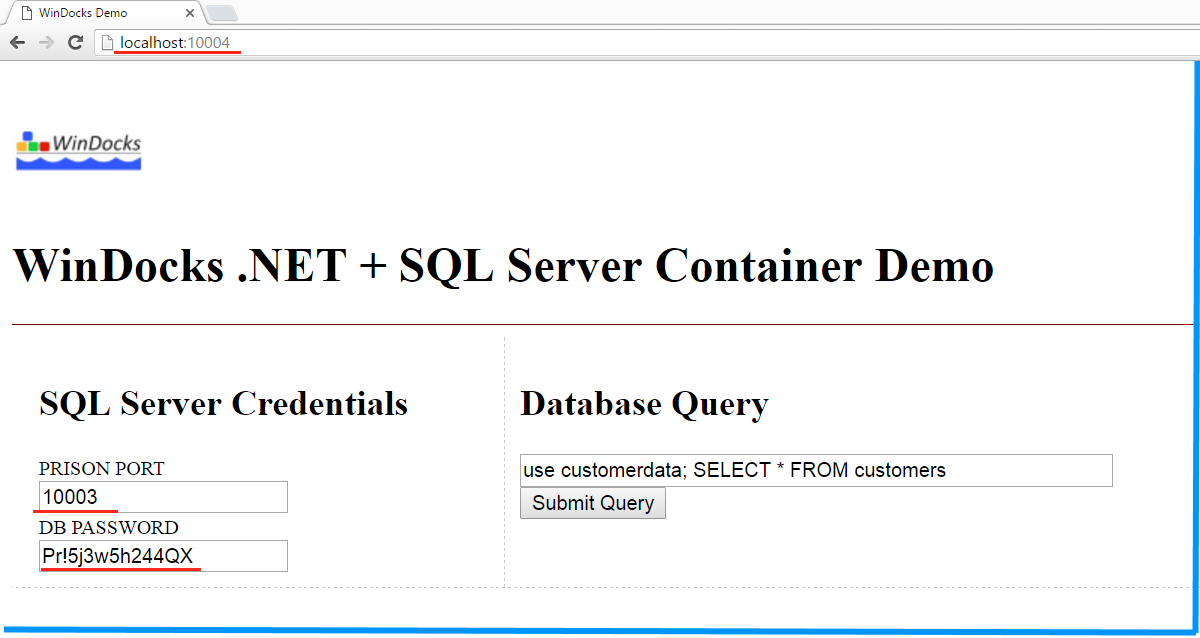 Congratulations and Next Steps

As you can see, the commands involved in working with SQL Server containers are simple, and each container takes only seconds to create. Containers are quickly gaining popularity for development and test, but also for  support of a broad range of legacy systems.  See our blog on the most common uses here.

Download your copy of the WinDocks Community Edition and start exploring SQL Server containers. Get yours here.