Hadoop is a framework written in Java, that allows processing of large datasets in a distributed manner across large clusters of commodity hardware.

Hadoop was created by Doug Cutting and he got the inspiration for Hadoop after reading Google papers "The Google File System" and "MapReduce: Simplified Data Processing on Large Clusters" published in 2003 and 2004 respectively.

There are three modes to start a Hadoop cluster:

In this post my aim is to get Hadoop up and running on a Ubuntu host using Local (Standalone) Mode and on Pseudo-Distributed Mode.

Since Hadoop is written in Java, Java should be installed in your Ubuntu host. Refer this link for recommended Java versions. Perform following command in command line to check if you have already installed Java on your machine.

This link provides a good resource in case you have not already installed Java.

Once Java is installed, you should set JAVA_HOME/bin to your PATH, to ensure java is available from the command line. To save the JAVA_HOME environment variable persistently, open up ~/.profile file using following command.

Append following lines to it and save.

Note that after editing, you should re-login in order to initialize the variables, but you could use following command and use the variable without re-login. Also there are many different ways you can save an environment variables in Ubuntu, refer this link to find out what they are.

Hadoop by default is configured to run as a single Java process, which runs in a non distributed mode. Standalone mode is usually useful in development phase since it is easy to test and debug. Also, Hadoop daemons are not started in this mode. Since Hadoop's default properties are set to standalone mode and there are no Hadoop daemons to run, there are no additional steps to carry out here.

This mode simulates a small scale cluster, with Hadoop daemons running on a local machine. Each Hadoop daemon is run on a separate Java process. Pseudo-Distributed Mode is a special case of Fully distributed mode.

Edit the core-site.xml and modify the following properties. fs.defaultFS property holds the locations of the NameNode.

Edit the hdfs-site.xml and modify the following properties. dfs.replication property holds the number of times each HDFS block should be replicated.

[ssh provides a way to securely log onto remote systems without using a password, using Key-based authentication. Key-based authentication creates a pair of keys; a private key and a public key. The private key will be kept as a secret at the client machine. The public key can be placed on any server you wish to access. Briefly what happens when a client tries to connect to a server is, server will generate a message to client using client's public key and only client can read it using it's private key. Based on the response server will get from client, server can decide if client is authorized or not.] 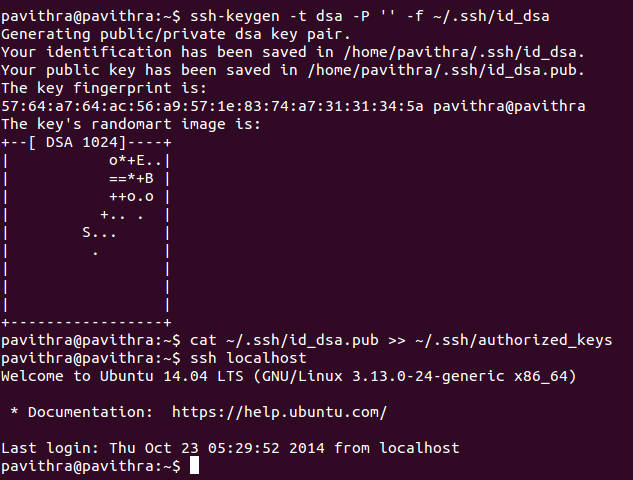 Configuring the Base HDFS Directory

hadoop.tmp.dir property within core-site.xml file holds the location to the base HDFS directory. Note that this property configuration doesn't depend on the mode Hadoop runs on. The default value for hadoop.tmp.dir property is /tmp, and there is a risk that some linux distributions might discard the contents of the /tmp directory in the local file system on each reboot, and leads to data loss within the local file system, hence to be on the safer side, it makes sense to change the location of the base directory to a much reliable one.

Carry out following steps to change the location of the base HDFS directory.

We need to format the HDFS file system, before starting Hadoop cluster in Pseudo-Distributed Mode for the first time. Note that formatting the file system multiple times will result deleting the existing file system data.

Execute the following command on command line to format the HDFS file system.

Now you can access the name node web interface at http://localhost:50070/. 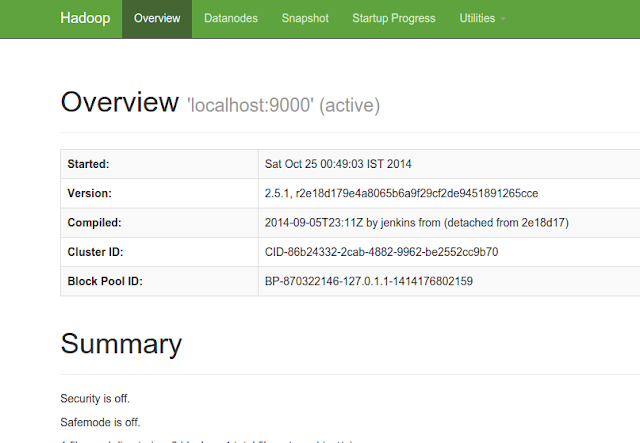 In Hadoop the home directories for each user is stored under /user directory.