in “ the moving parts of opscode chef ” there was an interesting discussion about the need of a highly available chef server if you want to use opscode chef as your configuration management tool of choice. especially for small to medium sized enviroments running your own chef server is overkill. if you don’t want to use chef-solo (a local “push” tool instead of the client-server model of chef), you can sign up for an account at the opscode chef platform . the opscode chef platform gives you an highly available chef server in the cloud. after sign up, it’s only a matter of minutes to get your first client (or ‘node’ in chef speak) under configuration management control.


bootstrap a chef-client with knife

if you have a box you want to have managed by the chef platform all you need is ssh access to it and chef installed on your local workstation. just run


(be sure you have the net::ssh::multi gem installed on your local workstation: $ sudo gem install net-ssh-multi)
to get chef-client installed and hooked up to the chef platform. after a few minutes you’ll find your brand new node ready to run cookbooks. 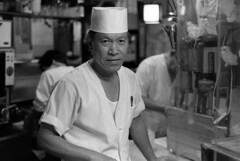 now you have the opscode chef platform acting as your chef server and another box acting as chef-client. it’s time to get something installed on that client using chef. before we write any code, let’s have a look at how everything plays together:


assign a role to a node

assuming you have a set of roles and cookbooks ready (that means: edited them on your local workstation and then uploaded them to the chef platform using e.g. knife cookbook upload load_balancer) its time now to get something installed on your new node. just type knife node run_list add [node] [entry] where [node] could be www.example.com and [entry] could be role[load_balancer] if you want to assign the role load_balancer to your node www.example.com.

now just run chef-client on www.example.com and it will grab the required cookbook and run its default recipe.