Top technology prognosticators have listed blockchain among the top 10 emerging technologies with the potential to revolutionize our world in the next decade. This fact makes it well worth investing your time now to learn. If you are a developer with a Java background and want to get up to speed on blockchain technology, this article will give you the basic information you need to get started.

Blockchain is a huge space, and at first, it can be overwhelming to navigate. Blockchain is different from other software technologies as it has a parallel non-technical universe with a focus on speculations, scams, price volatility, trading, ICOs, cryptocurrencies, Bitcoin maximalism, game theory, human greed, etc. Here, we will ignore that side of blockchain completely and look only at the technical aspects.

The Theoretical Minimum for Blockchain

Regardless of the programing language and implementation details, there are some basic fundamentals about blockchain that you should be familiar with. Without this understanding, it is impossible to grasp the foundations or build on them. Based on my experience, the very minimum two technologies that must be understood are Bitcoin and Ethereum. It happens that both projects introduced something new in the space, both currently have the highest market cap, the highest developer community, etc. Most other blockchain projects, whether they are public or private, permissionless or permissioned, are forks of Bitcoin or Ethereum, or build and improve their shortcomings in some ways by making certain trade-offs. Understanding these two projects is like taking networking, database theory, messaging, data structures, and two programing language classes in university, thus understanding how these two blockchain technologies will open your mind up to the blockchain universe. 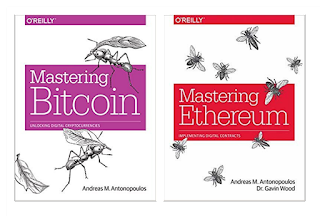 Above are books to start with when learning more about blockchain development.

The two books I recommend for this purpose happen to be from the same author — Andreas M. Antonopoulos:

If you are coming from a technical background, it makes sense to build on that knowledge and see what blockchain brings to the table. In the end, blockchain is a new technology, but it contains a combination of existing technologies with human behavior fueled by network effects.

It is worth stating that the popular technologies such as Java, .NET, and relational databases are not common in the blockchain space. This space is primarily dominated by C, Go, Rust on the server side, and JavaScript on the client side. But if you know Java, there are a few projects and components written in Java that can be used as a leveraged entry point to the blockchain space.

Assuming you've read the above two books, and want to get your hands dirty, here are a few open-source blockchain projects written in Java: 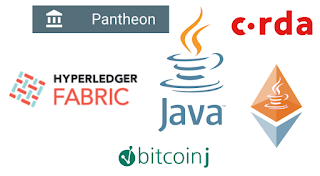 If you are still not sure where to start, I suggest you read Mastering Bitcoin, that will give you the solid foundation. If you like touching technology before reading, go to GitHub and play with one of the projects listed above. The rest will follow. The future is open and decentralized.