This is the first pat of this article series about "Python". In this article you will learn Python step-by-step and easily.

As a techie and software engineer, I love to explore new technologies and languages and this time it's "Python". If you are into object-oriented languages then guys I think you need to give it a try.

Before proceeding let's see what Python is trying to say 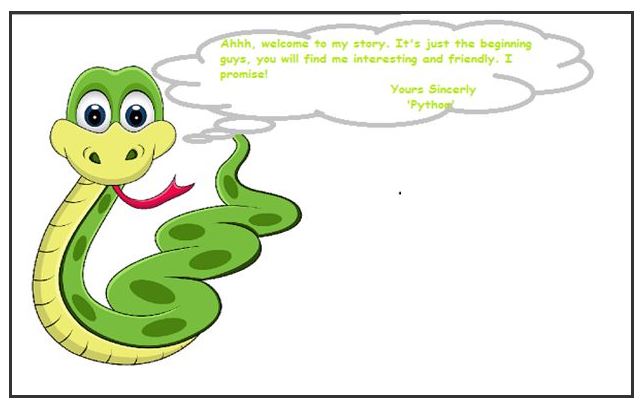 Appeal: “It always hurts if people pronunciate your name incorrectly for some reason such as ascent. So before narrating my story and feature I want to tell you guys how to pronunce my name, because it makes me feel good.”

I hope now I am clear, so let's explore the features of Python one by one.

“If am saying Python is simple and easy to use, then don't just blindly believe me; just code in it and feel the difference.”
Python is seriously simple and a ready-to-mingle type programming language as per my latest experience with Python. It is a real programming language because it offers a more versatile structure and support for large programs than any other scripts do.

If you ask people or students “Which language offers more error checking?”
Then, they will frankly tell you “C”.

But if their answer is "C", then I think they haven't heard about "Python". Yes, I said that and I mean it. Python offers much more error checking than C. In spite of this, Python offers high level data types and flexibility.

It offers Flexible arrays and dictionaries too and if you have any doubt regarding its generation then let me be clear, it's a "High Level Language".

Python is an interpreted language doesn't that sound cool and exciting to you? That means, Python will save you considerable time during program development because now you don't need any type of compilation and linking.

You can use the interpreter interactively that somehow makes your efforts as well as time less, what else a programmer needs. Since time is money for us.

Python gives one more freedom to you. Now with Python you can easily divide or split your program into several set of modules that can be later used in other Python programs.

It comes with large numbers of standard modules that you can use as the base of your Python program. If you still didn't get the theme of this feature then let me explain it for you with some familiar examples.

Some of what the Python modules offers:

If you are an object oriented guy and can't dream apart or over it, then Python can be a new host for you. It's both procedure-oriented as well as object-oriented like in .NET, C++, Java and some others.

If I am saying it is open source then that means it's free (as we know) and we the programmers and geeks love the things that comes freely and easy to us.

You can read what works behind the Python, can read it's source code, make changes in it and many other things. Isn't all these features enough to make Python user-friendly or a lovable language? Yes, they are.

Since it's open source, it supports this feature too. You can run Python or I can say Python allows you that you can make it run in nearly any environment.

Python is not only much simpler than any other language (that offers a very high level of features) but also easily understandable and readable. Programs written in Python are much shorter than any other programming language like C, C++, Java and so on. (Kindly don't ask why .NET isn't here).

The reasons behind it are:

“Python is extensible too.”

If you know how C works, then Python might gain you attention or your interest. As in C it is very easy to add a new built-in function to the C interpreter.

You can always link your Python interpreter into an application written in C and use it anytime as an extension.

The following are some guidelines from my side:

I tried to make this an interesting and interactive article and I wish you guys like that, meanwhile if you have any suggestions then your welcome.

Until the next part, keep sharing.