xtext has been released as a part of the eclipse galileo release train on june 24th, 2009. xtext is a framework for building dlss ( d omain s pecific l anguages). in fact, it can be seen as a dsl for defining dsls.

in this article, we will develop a small dsl for defining entities.

to install, unzip the distribution file to a directory of your liking.

windows users, please make sure you unzip to a directory near to your filesystem root! eclipse contains files and folders with long names that might be hard to handle for windows.

after launching eclipse and creating a new workspace (or using an existing one), create a new xtext project by selecting file -> new... project... -> xtext project . in this article, we're creating a dsl for describing entities, so let's go with the following settings:

click finish to let xtext create the three projects that make up your dsl:

upon finishing creating these three projects, xtext opens a file entity.xtext , which contains a sample grammar, which we will change in a second.

define the grammar for your dsl

next up, we need to define the grammar for our dsl. to make things easier for us, let's first write down a sample model. please open org.xtext.example.entity.generator/src/model/mymodel.entity and key in the following text:

most of this model should be pretty obvious, but there are two things worth noting:

let's derive the grammar for this model. open org.xtext.example.entity/src/org/xtext/example/entity.xtext , erase its entire contents and enter the following:

the first line indicates we want the new grammar to be derived from the (built-in) grammar terminals , which defines some basic terminal rules (like string, id and so forth). if you're interested, ctrl+click on the language name to navigate to its definition.

the second line defines the name and namespace uri for our own grammar.

this tells xtext that our model contains any number (i.e. 0..n , as declared by the * ) of type s. what exactly a type is needs to be specified. apparently, a type can be either a typedef or an entity :

a typedef starts with the keyword typedef , followed by an id making up its name. following the name, we can optionally (hence the question mark at the end) add a mapsto clause. the fragment mappedtype=javaid specifies that the typedef will later have an attribute named mappedtype of type javaid. as javaid is not yet defined, we need to do so:

so, a javaid is a sequence of id s and dots, making up a qualified java type name, such as java.util.date .

next, let's define how to model entities:

as you might have guessed, entity s start with the keyword entity , followed by an id as their name. they may optionally extends another entity. surrounding a rule call with square brackets means "this is a cross reference", i.e. a reference to an already existing element.

entity s do have attribute s (any number, to be precise), thus we have to define how attribute s look like:

by now, you should be able to read this rule: an attribute has a type which is a cross reference to a type (which is either a typedef or an entity ), it has an optional multiplicity indicator (the star) and - of course - if has a name.

now it is time to see the fruits of our labor. but first, we need to compile our grammar. xtext will create:

from this grammar. to make this happen, please select org.xtext.example.entity/src/org/xtext/example/generateentity.mwe and select run as -> mwe workflow from the context menu. xtext will now generate the entire infrastructure for your dsl and after a few seconds you should have a shiny new dsl including a great editor.

taking it for a spin

seeing is believing, so let's take the dsl editor for a test drive. select the dsl project org.xtext.example.entity and, from the context menu, select run as -> eclipse application . a second instance of eclipse will be started.

you can now insert the model we designed above or enter a new model: 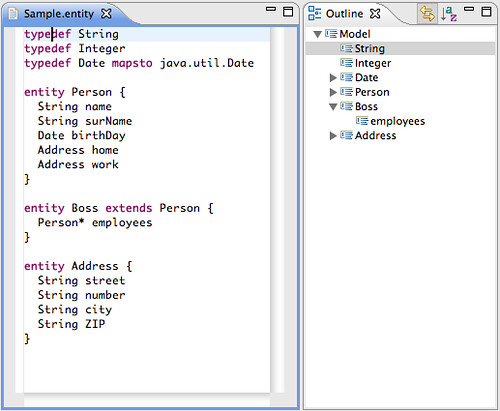 now that we've got a fancy editor for our dsl, we want to transform the models we can create with this editor into something meaningful. this, however, will be the topic of the next installment.

feel free to discuss this article in the comments section of my blog . should you have any technical questions regarding xtext, we've got an excellent newsgroup where the committers answer your questions. we also offer professional (commercial) support , i.e. customized trainings to get your team up to speed. just drop us a note , we're happy to discuss the details with you.