9.3 out of 10 people who quote statistics are more interested in winning an argument than conveying the meaning of those statistics.

At some point in your career you’ll be asked to quantify some piece of work. This request sounds innocuous enough, usually with a simple question like “what is the cost?” or “what are the benefits?”

If you’re anything like me, the internal response is usually “How the hell I am supposed to quantify that?”

The solution is usually to start Googling for graphs, studies, quotes, blog posts, memes, or just about anything that can provide some evidence to support your argument. Or, in other words, to embark on a massive exercise in confirmation bias.

The reality is that unless you have a reasonable amount of experience in conducting rigorous, peer reviewed research, or you can legitimately call yourself an expert on a subject, every argument you make that is backed by science and numbers is going to be so biased as to render those numbers meaningless.

Which is not to say that your argument is invalid. It’s just that science and numbers form such an important part of the enterprise decision making ritual, which looks something like this: 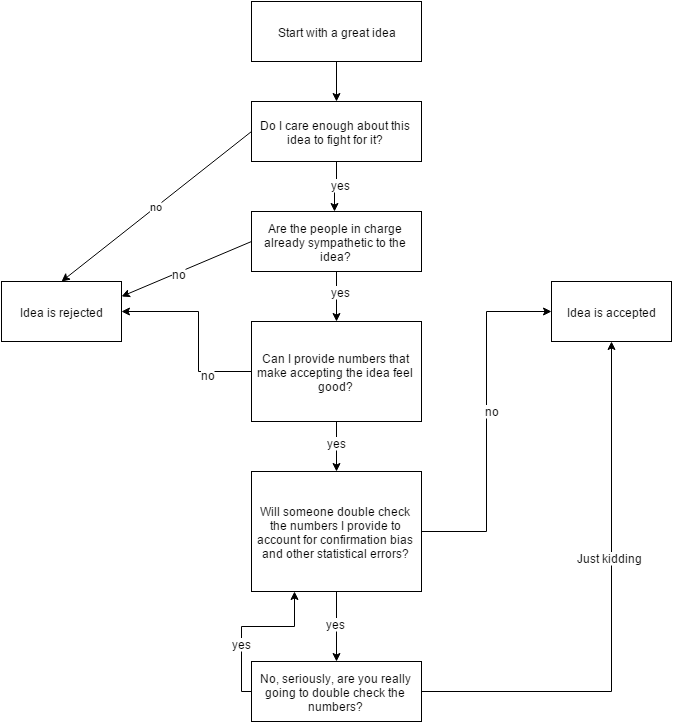 Which leads me into Casper’s fourth law of enterprise:

Making people feel good about the decisions you want them to make is the most important skill you can ever learn.

Note that the fourth law of enterprise has nothing to do with making decisions based on rigorous research, tested methodologies or even common sense. It’s all about inspring people to feel good about making a decision in your favor.

Don’t get me wrong, if science and numbers actually back up your argument, then that is great. It’s just not a prerequisite, and the numbers themselves are secondary to giving a decision maker a good feeling about saying yes, because powerful people make decisions based on their instincts:

Our research suggests that the powerful more strongly rely on gut feelings and internal cues when they make judgments about what they like, what is true, and what they should do.

So the next time you’re asked to provide some evidence to support your case, don’t feel so bad about copying and pasting statistics when deep down you know just how invalid this process is from a scientific point of view. Instead realize that very few people actually understand statistics, and appreciate that your report is really just part of the management courtship ritual. And who doesn’t love making decisions that feel good?