Linux and open source designs are increasingly leading the technology industry in innovation, and it's been exciting for the WinDocks team to bring the power of Docker containers to the Windows community. Since the launch of WinDocks earlier this year, support of automated Build and Test has emerged as one of the top use-cases.  In this article, we explore the use of Git with containers to deliver fast, integrated .NET and SQL Server environments.

In addition to being faster than VMs, containers typically yield a three-five times reduction in VMs used, with great license cost savings. Host maintenance is also simplified, as containers are updated with the latest host image.

Docker defines an API for working with application containers, and a method of application packaging that includes all software dependencies. Docker is becoming a formal standard through the Linux foundation, and has become a cross platform design with collaboration between Microsoft and Docker. The Microsoft implementation, however, follows the Linux container design and relies on a shell for configuring application behavior. A shell-based container works well for Windows console apps, Windows services, and most .NET apps, but it won't work for SQL Server and other Windows applications.

We discuss the differences between the WinDocks and Microsoft container designs here. In this exercise, we'll use WinDocks containers.

We'll use a public repo on GitHub.com to pull a .NET application and show how it is integrated with a SQL Server container. The result is a simple workflow for developers or testers. The tooling is particularly useful for DBAs, who provide updated SQL Server images and allow the respective teams to self-service integrated environments.

Tools for Developer and Tester Self-Service

Windows containers are tools for developers or testers to self-service integrated environments. A user can setup (and delete) SQL Server containers, with DBA-approved SQL images, in seconds, and a team can work on identical, isolated instances on a shared VM. Containers are easily deleted and replaced, and are ideal for destructive testing. Containers provide user and process isolation for applications, and .NET and SQL Server containers benefit from namespace isolation.

Two public GitHub repos are used. GitDockerFile is the DockerFile that will clone our .NET application (DotNetSample). The GitDockerFile also includes a PowerShell script that we'll use later.

Open a command prompt as Admin and clone the GitDockerFile to your local machine:

Use File Explorer to open the DockerFile. The DockerFile defines a sequence of commands that are executed sequentially by the Docker daemon. DockerFiles begin with the base image and, in this case, refers to the .NET-4.5 image. The second step "Git Clones" the dotnetsample repo to the container. The third step copies the web.config file into the container.

Refer to both images below for the sequence in creating an integrated .NET + SQL Server container environment. There are three steps:

Once the SQL Server container is running, open the TestGitClone folder (that was cloned from the Git repo), and open the web.config file using notepad. Edit the IP address and port, and the sa password as shown. When updated, build the dotnet container.

The WinDocks base .NET image includes a similar instance of the .NET application, so in this case, we actually have two applications running in the container. This isn't a recommended practice, but doesn't affect the purpose of this exercise. The base image application is accessible at: localhost:10004

An alternative to the Docker command line is to use a PowerShell script. A sample script was included in the earlier Git Clone (GitDockerFile): Link.ps1. Open the script and note that parameters are included for the WinDocks host IP address, the reference to the TestGitClone folder, and the SQL Server image. Modify these if needed, but don't change the reference to the standard Docker daemon port of 2375!

There are a variety of ways to run PowerShell scripts in UnRestricted mode.

In less than a minute, a fully integrated environment is ready. These containers can easily be deleted and replaced just as quickly. 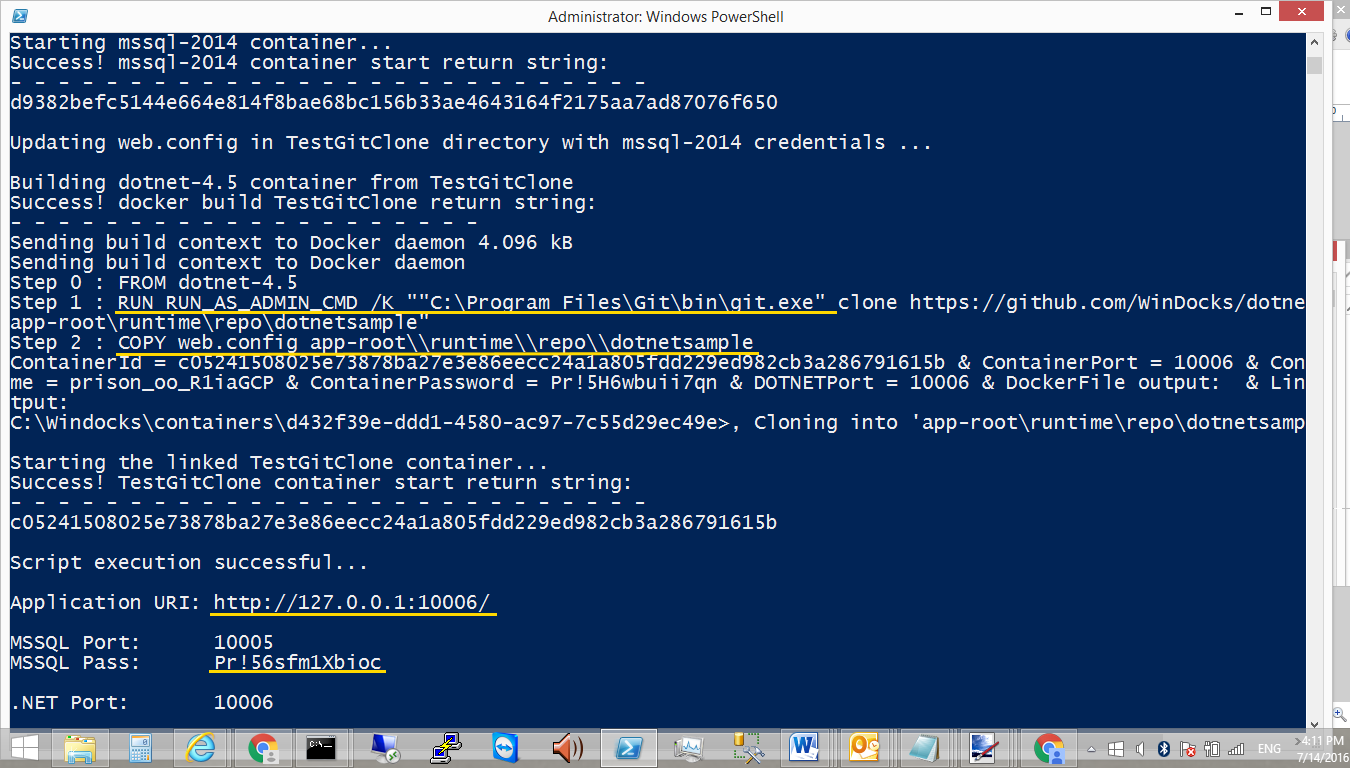 Windows containers with Docker commands are simple to use and are a powerful new option for developers and testers for self-service integrated environments. DBAs can easily provide approved SQL Server images for shared team use.