Join For Free
A year ago or so, I came across the Git-user mailing list (aka. "Git for human beings"). 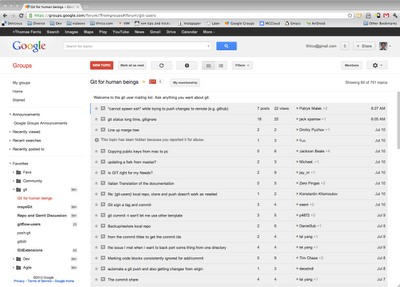 Over the year, I grew a little addicted to helping people out with their Git problems. When the new git-scm.com webpage launched, and the link to the mailing list had disappeared, I was quick to ask them to add it again. I think this mailing list fills an important hole in the Git community between:


Then there's the joy of using (the new) Google Groups. It's easy to join (if you've got a Google account). Spam is virtually eliminated. The mobile version works pretty well on my phone. Search is great and it all looks pretty good (actually today they announced another bunch of improvements). Big hand to the Google Groups team, this stuff is awesome (now Google would just have to make something IRC-like, and we'd be well off).

My favorite thing about helping out on the Git-user list (well, apart from that fuzzy warm feeling when someone says thanks) is that it keeps my Git basics sharp. Any time a colleague asks me how to set a new upstream, or rebase one branch onto another, chances are I was just practicing that recently for the mailing list. Keep in mind that if the Go-to-guy for Git questions in the team doesn't know her/his basics, people will get annoyed at Git rather quickly.

Of  course there are occasionally more challenging questions, and I end up learning something from somebody else on the list. And then in a few cases, we just have to give up and bounce people over to the Git development list (usually for feature requests and bug reports).

I like to think that we are doing the Git community a big service by elevating the average Git knowledge in the field, and also shielding the development list from some of the more repeating questions.

So here's the little sales-pitch in the end: The list has gotten rather busy lately, so if you've got some Git-foo to spare, it would be great if you could answer a couple of threads. Personally I make it an evening routine to drop by groups.google.com, and see if there are any unread or unanswered threads there.
Git