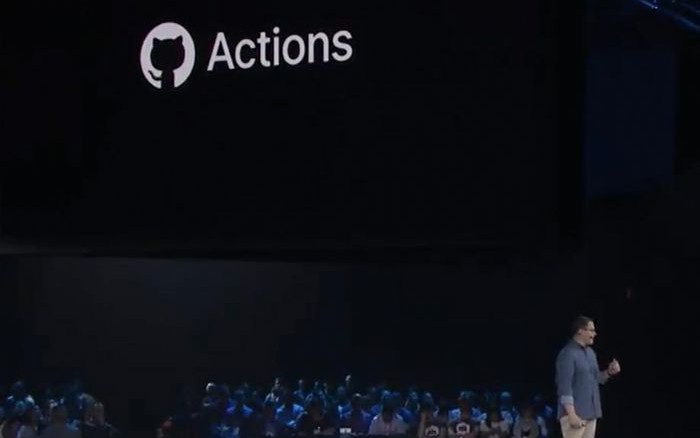 I am back again in one of the event spaces of the European online shopping giant, Zalando, for the live streaming of GitHub Universe. This year has a much quieter room; maybe GitHub is no longer cool after their acquisition announcement, or maybe it's just the good weather outside keeping people away.

The keynote starts with a typical GitHub animation, followed by a very American-style inspirational video that focuses on the collaboration aspect of GitHub, and the big picture impact of the platform, and the projects hosted on it. My skeptical journalist mind found it a little over the top, but under that sheen was an interesting highlight of where some open source projects are used.

The keynote started with Jason Warner, SVP of Technology mentioning that the company is mostly about developers, and this is the event for them, and it's the only event that GitHub runs. 2018 saw ten years of GitHub, and Jason asked how we were all coding ten years ago. Probably with a language like Java, there was more outsourcing, and developers were less valuable. Now there are more software developer vacancies than engineers in many industrial companies, using a plethora of languages. GitHub launched in 2008 with an API service, and returned YAML, again, a different service to what it is now, and Jason made sure to point out the enterprise features they have (repeatedly).

Every Universe, GitHub announces the "State of the Octoverse", and the past years highlights included:

Next, and to yet again emphasize the enterprise, a representative of American Airlines delivered a rather bland talk about inner sourcing. If you've not heard of the concept before, it's internal open sourcing for enterprises. So yes, that's another enterprise plug; are you starting to see GitHub's next priorities yet?

After this presentation, Jason Warner returned to the stage, and casually dropped in a mention about the elephant in the room, their Microsoft acquisition. It happened so suddenly there was little reaction in the room, to the surprise of Jason. However, the acquisition isn't until next year, so there wasn't much more detail to cover.

The next speaker to take to the stage was Kathy Simpson, Senior Director of Project Management. Kathy focused on collaboration and removing blockers and pain points from the development process. Ironically, then the live feed dropped. The feature she announced was "Suggested Changes", that allows collaborators to make change suggestions inline in comments that others can reject or accept straight from the comment into the codebase.

Kathy also announced updates to the learning lab, again, with courses aimed more at enterprise users. I wasn't able to understand if this meant they could customize the experience for internal enterprise users. Another enterprise-friendly feature Kathy announced was GitHub Connect that allows enterprise developers to share data better with their public profile to highlight their contributions. I wondered how many businesses will like this idea, or rather keep their developers work entirely behind closed doors.

Finally, Kathy announced that .NET and Java (there's that enterprise again) are added to the list of languages supported by the security vulnerability alerts feature. Over 5 million alerts were sent in the past year, and now GitHub adds token scanning on public repositories that automatically contacts providers to invalidate the token and then lets the owner know.

Next was Sam Lambert, head of platform, who announced a handful of usage states and quickly passed to Omoju Miller, Senior Data Scientist. Omoju spoke over a curious Universe visual that was a bit lost on live stream followers, but mostly focused on the collaboration and positive outcomes of using GitHub.

Then briefly back to Sam and Kyle Daigle, Director of Ecosystem Engineering, to cover the standout announcement of the event, GitHub Actions. Potentially harmful to many CI providers, Actions lets you build workflows to build and deploy code (running in containers) with a drag and drop interface or declarative configuration file. It's currently a closed beta, and I hope to take it for a test run soon to see what you can accomplish with the feature, and what the plan limits are.

Finally, Kyle announced a new ghx command (can't find any links for further information) that is pretty much GitHub's first fully-fledged CLI (much more than the hub CLI tool they currently have) that is context and environment-aware when you issue commands using it.

And that's all that GitHub announced! Some interesting new features, and a lot of enterprise-friendly mentions. What are your thoughts?