In most companies the single largest cost is human resources. However, by leveraging Open Source intelligently, you can significantly reduce this cost, by literally having the entirety of GitHub's user base, working for "free" for your company. This of course is a bit like what investors refers to as "China math", but GitHub has 65 million registered user accounts, most of whom we must assume are developers one way or another. If you intelligently structure your organisation around GitHub, there is literally nothing preventing you from using every single one of these developers as your own company's resource, making you a million times more productive than mega corporations such as Amazon, Facebook, and Microsoft - For a millionth of the cost these mega corporations are paying. But first let's illustrate the problem, such that the solution becomes clear ...

In one of my previous jobs somebody had cloned an open source git repository, then added its code to our own private corporate cloud's git repositories, for then to start modifying the thing (the horror!) 2 years later it took one of my developers 6 weeks to update the thing to use the latest version as created by its main developer on GitHub, trying to keep as many of our own customisations as possible in the process. Needless to say, but I was furious about the original decision, due to having responsibilities for code quality at this company.

Let me illustrate by showing you how I'm currently using Magic myself in my day job. The most crucial point in this, is that I never cloned or forked Magic, but instead I've created an Azure pipeline that points directly to Magic's GitHub repository. Please notice the little peculiarity in the "Get sources" part. 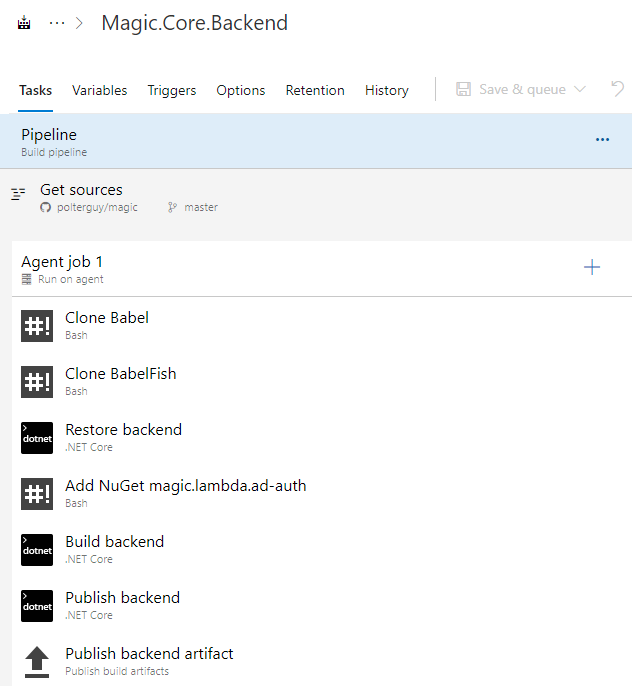 What the above does, is instead of creating and maintaining our own "clone" of Magic, we point the pipeline directly to its GitHub repository. To be specific, this part should resemble this.

Notice how the source is pointing to GitHub, and not an Azure repository? In the above screenshot, I am just pointing it directly to the master branch. In a live production environment you would probably rather want to point it to specific tags, unless you have a very intimate relationship with the maintainers of the project. Simply due to that even though it's the "master" branch, it still might contain temporary commits, that you do not want to pull, unless the system has been thoroughly tested and verified - Which is rarely done, except for "tags" in the GitHub repository. Tags are basically being created as a new release of the project is created, which normally gives you better guarantees of the project's state of stability, then some random master commit.

Since I am the main maintainer of Magic though, I have no problems with this, since I know fairly well how good the current master branch is at any particular point in time. Besides, I also have turned off CI triggers on my pipeline, building the project for every change committed to the master branch. The last part is crucial, since you don't want any random commit to trigger a new build, especially not for your production environment. This makes the process slightly less automated, since instead of using CI, I have to manually trigger the pipeline - But it also gives me 100% control over when I create a new build from the open source repository.

Afterwards the pipeline will clone Babel and Babelfish. Both of these are projects I am more or less the sole maintainer behind. This little trick allows me to populate the modules folder with whatever Magic micro services I happen to want within that particular end result. Below you can see a screenshot of how this actually looks like.

This allows me to dynamically install modules into my Magic backend, as an integrated part of my pipeline.

For this particular pipeline, I want to enable Windows Automatic Authentication for Magic, which can easily be done by simply adding a NuGet package to the the core before I build the backend. You can see how this is done below.

This allows me to dynamically populate my Magic backend with any slots being C# bindings I happen to need for that particular pipeline. Due to Magic's modularity, this will actually change the behaviour of Magic, without any required code changes. 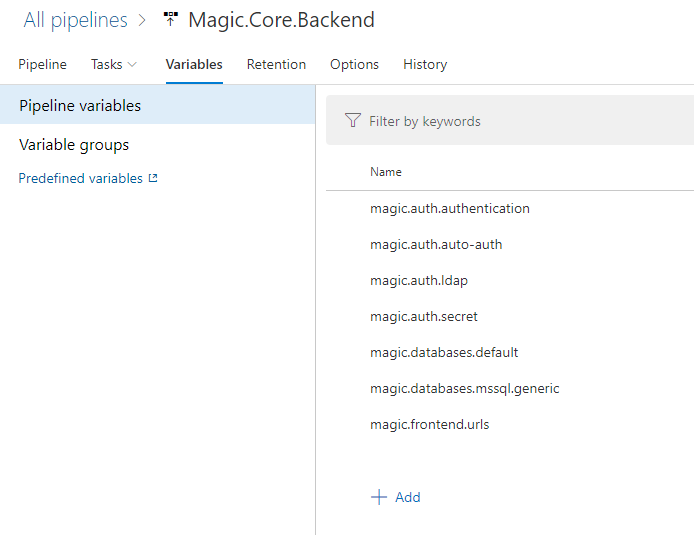 Notice, I can't show you their values for security reasons, but these are dynamically exchanging the relevant "appsettings.json" values as the backend is being deployed.

The frontend is built using similar mechanisms, except here I have an npm run-script section in the Angular project that I can reference to create production builds such as the following screenshot illustrates. 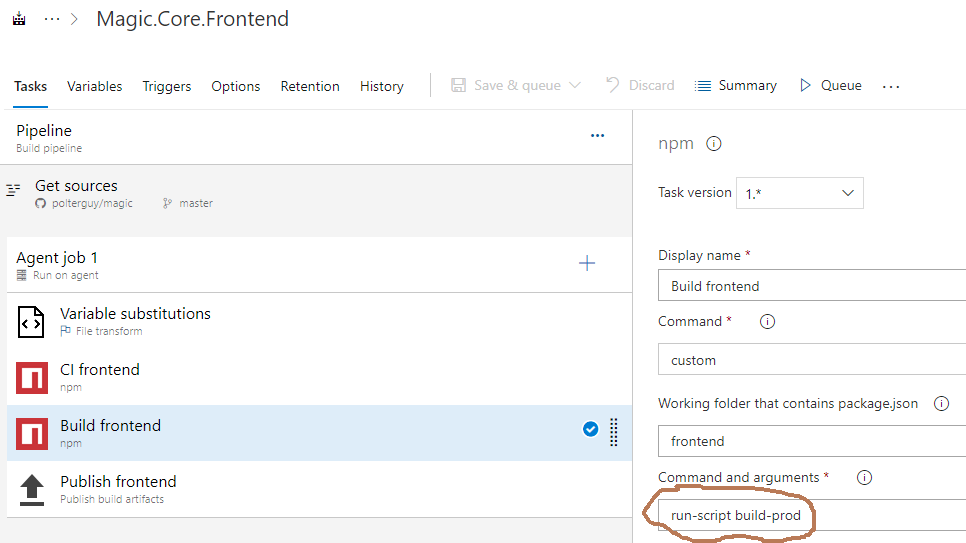 The frontend is a bit messier though admittedly, since Angular packs everything into randomly generated files during the build process, making it difficult to intelligently refer to variables here, unless I've accommodated for this in its code - Which I do not want to do. Hence, for simplicity reasons I apply variable substitutions here during the build pipeline phase. This reduces my flexibility a bit, since I have to have one build for each environment, assuming I need to override these variables in each environment of course. But it's not a big deal for this particular project.

And yes, I know I can use alternative mechanisms, but that includes scattering my Angular code with weird looking #{xxx} sections, making it impossible to use in a debug/development environment out of the box, without first changing a whole bunch of garbage configuration values. Hence, the additional "one build pipeline per environment" requirement for Magic is a small price to pay for being able to keep everything as generic as possible, with zero development dependencies or configuration requirements to get it to work in a development environment. Below you can see a screenshot of how variable substitutions occurs in the frontend parts. 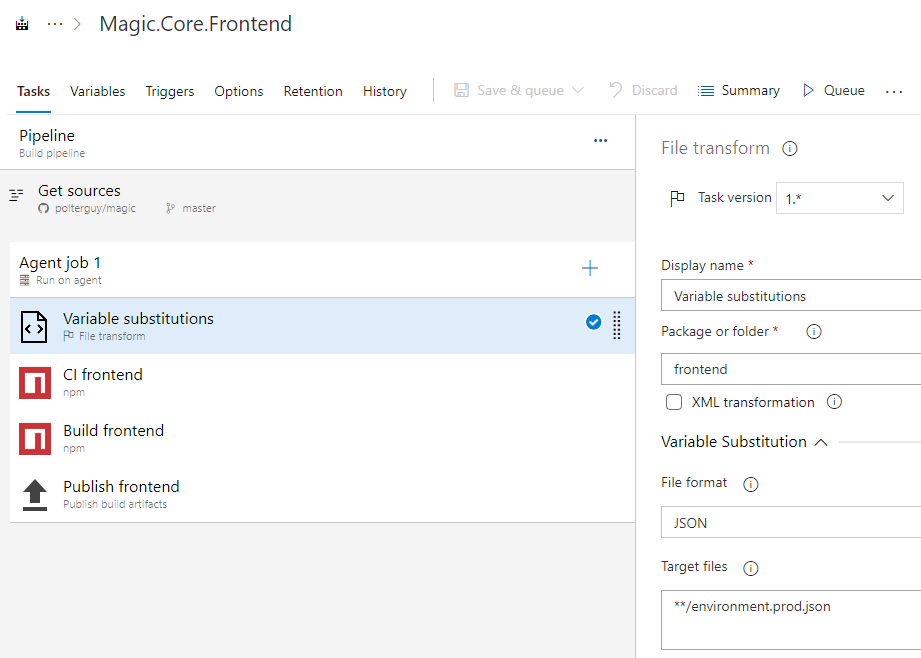 Basically, this only substitutes one single variable, being the backend's URL, which of course I create in a similar fashion as I do with the backend variables, except this occurs during the build step, and not during the deployment step.

This produces an artefact, you can deploy any ways you see fit. In our DEV environment at my day job, we're just using an IIS server, on a virtual machine, since this allows us to deploy 30/50 web apps on a single machine, reducing our cloud costs by a lot - While in production of course, you might want to consider harder metals, such as Azure WebApps, etc. Anyways, regardless of how you plan to deploy it, at the end of the day you get an artefact, that once you deploy results in the following. 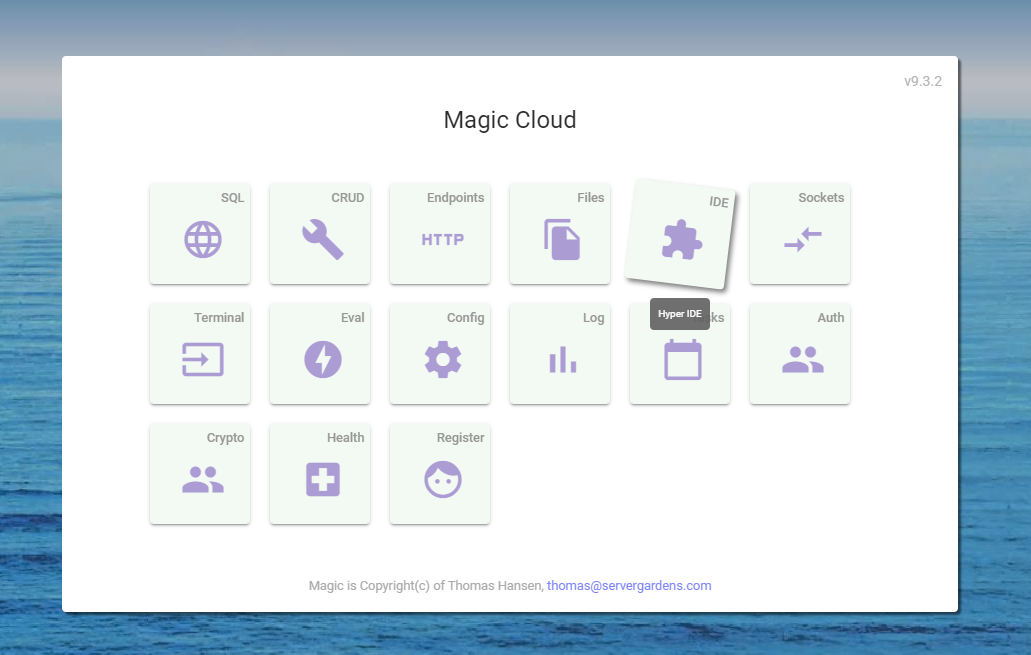 By creating such "Gitless Cloud Systems", directly pointing to open source GitHub repositories, you get to constantly leverage any innovations added to these projects, without having to manually merge in changes as I illustrated in the beginning of the article. However, and yes, there are "buts" ...

Not all projects can use this approach, for instance due to that they require code modifications to work in your environment, not allowing you to override its behaviour through configuration settings, etc. Or they require additional functionality, and does not provide a plugin architecture, allowing you to dynamically inject dynamic functionality the way Magic does. Hence, the project must be what I refer to as "super agile" in its core architecture, allowing you to intercept and add to its core any ways you may require. Very few GitHub projects are as "agile" in nature as Magic, so this might be a challenge of course.

The third "but" is that you give away all control over the core project, which for a project like Magic probably doesn't mean that much, due to its flexibility and plugin architecture. But you can no longer "control" the project the way you'd control a project where you have the source code in your own git repositories. However, leverage can literally be bought - And most developers and maintainers of GitHub projects are more than willing to accommodate for change requests you provide them with, if you ask nicely.

Alternatively, you can flat out "bribe" the developers behind the project with money, to get to "influence" the project, and have its maintainers prioritise your problems. I for instance, accept such "bribery" through a PayPal donate button on my website. Now of course, i might not necessarily implement your suggestion exactly as you want me to, or at all if it's a bad suggestion - But of course, for obvious reasons, if you donate to me before you ask me (nicely!) to implement some feature, I would probably be more willing to make you happy. And if your company gets to leverage 65 million developers, and all their innovations for free - Then creating a symbiotic relationship between the project's main developers and your company, might be an extremely inexpensive method of applying insane amounts of innovation to your organisation, for the cost of sometimes as little a single cup of coffee.

However, it all starts with an OPEN MINDSET! I'll start ^_^